The rise of the UK fibre broadband altnet 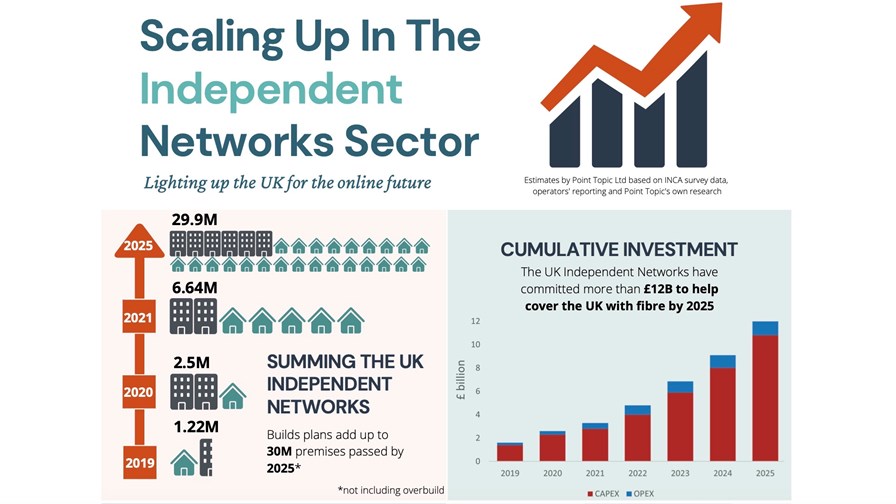 So often forgotten in recent years as 5G talk dominated the communications networking landscape, fixed broadband has attracted not only some of its much-deserved limelight in the past year or so but has also been attracting significant investments in multiple markets, as reported frequently by the team here at TelecomTV. And the UK is one of the countries set to benefit most from the recent surge in broadband altnet investments, with multiple fibre access specialists now putting their trench-diggers into action and providing new competition for Openreach, the quasi-autonomous division of national operator BT. Those altnets are now also providing more muscle (and funding) for the Independent Networks Cooperative Association (INCA), which has just announced a surge in membership.

Openreach itself, of course, has been accelerating its fibre rollout plans of late, plans that have attracted the financial interest of Altice chief Patrick Drahi. (See Drahi’s Altice grabs 12.1% chunk of BT and BT to increase and accelerate FTTP build to 25m premises by the end of 2026.)

One could argue that Openreach’s activity has been somewhat reactionary, spurred on initially by the aggressive plans (and subsequent action) of rival wholesale fibre network builder CityFibre and now also by the seemingly never-ending roll call of companies ploughing cash into fibre access networks in cities, towns and even more rural areas around the UK – Lightspeed Broadband, Upp, Giganet and Netomnia are just some of the names that have attracted new funding and shared their rollout plans, adding to the likes of Community Fibre, Hyperoptic, Toob and more.

Giganet, which gained £250 million in funding as a result of an acquisition earlier this year, is one of 32 companies to have joined INCA this year, according to the industry group. “The new INCA members include the return of powerful industry stakeholder CityFibre,” it states, along with several new entrant operators, major suppliers and local authorities. New operators welcomed by INCA include Freedom Fibre, Borderlink Broadband, Giganet, Spring Fibre, Save9, Toob and F&W Networks.

INCA’s CEO Malcolm Corbett added: “As we welcome INCA’s new members, our unified presence in the industry reflects the overall strength of the independent sector. With the impressive funding achieved the altnets are well positioned to meet the Gigabit Britain challenge. INCA is dedicated to representing the interests of the thriving independent sector and the new members affirm the confidence that the industry holds in our experience and insight. Virgin and Openreach have been the dominant forces in UK broadband, but it’s clear that together the altnets also wield substantial and growing influence. The influx of new members we have seen and the amount of funding the sector is receiving are good indicators of our collective strength.”

And whereas it was all but impossible for regular broadband users to get a fibre connection anywhere in the UK four or five years ago, the situation is quite different now and getting better for households and businesses in terms of the options and services on offer. According to INCA, which recently commissioned some UK broadband sector research from Point Topic, independent operators are expected to pass more than 6.6 million premises (more than 20% of the total) with fibre, and boast a combined 1.1 million live connections, by the end of this year. That would be a massive leap from the 2.5 million premises passed and 845,000 live connections recorded at the end of 2020.

And there’s plenty more to follow. According to Point Topic’s projections, based on operator plans shared in the results of a survey and shared in the recent report ‘Metrics for the UK Independent Network Sector’, the UK’s independent operators should be passing just over 29.9 million premises by the end of 2025 and boast more than 6.6 million live connections, having invested £12 billion in capex and opex (see the graphic above).

The report, which is extensive and full of information (and available here), “demonstrates that the ‘altnets’ are making a major contribution to meeting the Government’s targets for gigabit broadband connectivity” noted Corbett. “This current wave of investment, particularly in full fibre and wireless broadband networks, means there is no segment of the market where there isn’t a plan to build independent networks.”

But there are still plenty of challenges for the UK FTTx altnets to overcome: The responses to Point Topic’s survey showed that getting wayleaves was the biggest concern, followed by ‘Overbuild by Openreach or other operators,’ while (tellingly) ‘Access to skills and labour within the changing market post-Brexit’ featured prominently among concerns while ‘Access to finance’ did not. (See graph below.) 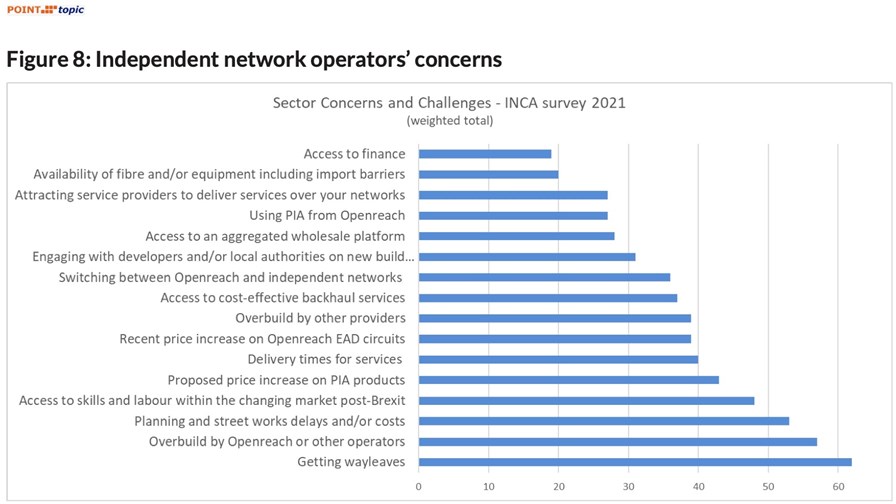