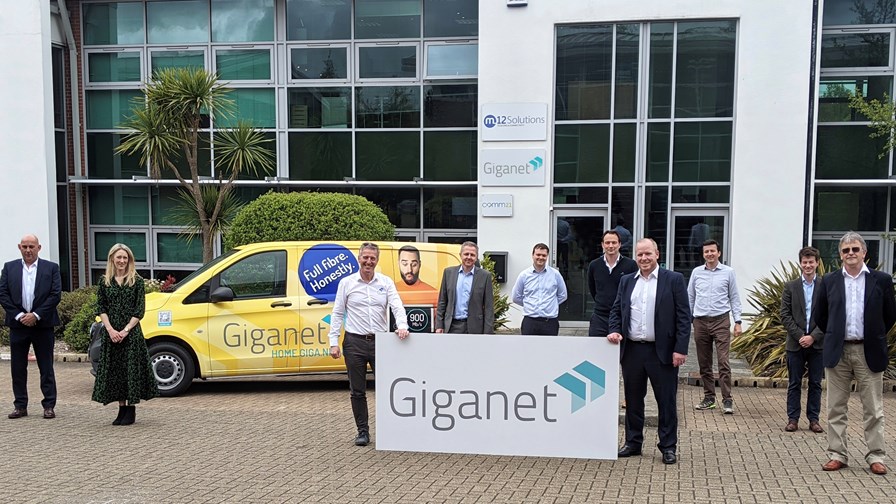 Key members of the Giganet team outside the company's offices in Fareham, UK

The UK fibre broadband market just got even hotter with the news that ISP Giganet is to build its own fibre-to-the-premises network in south-west England and is being funded to the tune of £250 million by its new owner, investment firm Fern Trading.

Now it will build its own fibre access networks: The ISP says it has already started construction in the counties of Hampshire, Wiltshire, Dorset and West Sussex, with a focus on “local and rural communities,” and plans to run its fibre past 300,000 homes and businesses. With that rollout and the expansion of its service reach via Openreach and CityFibre, Giganet aims to offer its services to more than 2 million homes and businesses and also create 200 jobs in the process.

The plans are funded by a £250 million cash injection from Fern Trading, a large trading group comprising about 250 companies in the property, renewable energy, healthcare and fibre networks sectors. Fern Trading, which is ultimately owned by Octopus Investments, already has three fibre network investments in the UK – Jurassic Fibre (in Devon), Swish Fibre (in which Fern Trading also invested £250 million and which operates in the south of England) and Vorboss, which provides fibre connections to large businesses and offices in London.

The cash injection follows Fern Trading’s acquisition of M12 Solutions, Giganet’s parent company, for an undisclosed sum: M12, which has been in operations for about 20 years, had been privately-owned by Andrew Skipsey (who will remain with the company) and his family.

Rob Skinner, Head of Alternative Investments at Octopus Investments, says Giganet will continue to operate as a separate entity, but that the teams from Fern Trading’s various fibre broadband operations will discuss “shared best practices and ideas,” which could include procurements where appropriate.

He says the £250 million figure is a commitment from Fern Trading to a multi-year network rollout but is not a set or capped figure: “We fully expect the Giganet team to invest that sum and if they needed more we would look at that option,” he told TelecomTV.

Skinner says the investments in fibre broadband operations make sense for Fern Trading/Octopus as it looks for areas of investment with very clear long-term demand, which, he notes, is what led Fern to first invest in renewable energy 10 years ago when the market was “nascent.” He notes that the “copper network is creaking… full fibre is needed – this is not a technology risk” and it’s beneficial to the UK economy.

The news is most certainly positive for the UK’s digital economy and adds further infrastructure-based competition to the sector.

Having been left behind in the fibre broadband revolution for years, the UK is now a hotbed of new rollouts. Wholesale operator CityFibre was arguably the catalyst for much of the current action as its plans and investments, plus some more accommodating actions from regulator Ofcom, spurred Openreach into action just at a time when the appetite for digital infrastructure investments was growing amongst private equity firms: Just last year, Community Fibre revealed plans for FTTH investments of up to £400 million in London following the sale of a stake to Warburg Pincus and DTCP for an undisclosed sum, while private equity giant KKR acquired a majority stake in Hyperoptic in 2019.

Openreach itself, of course, is now hunting for a private equity partner to further expand its fibre rollout plans, which have now been costed at £15 billion to reach 25 million properties by the end of 2026.

All of this activity will help drag the UK out of the fibre broadband wilderness, though it still has some way to go: A recent report from the FTTH Council Europe and research house IDATE identified the UK (along with Germany and Italy) as countries with “the most work left to do” to roll out true fibre-based broadband connectivity. According to that report, the UK had 4.2 million premises passed by fibre at the end of September 2020, giving it a FTTH/B coverage rate of just 15.1%, one of the lowest in Europe, though rollouts are now accelerating fast. (See Altnet rollouts drive Europe’s FTTH/B boom.)