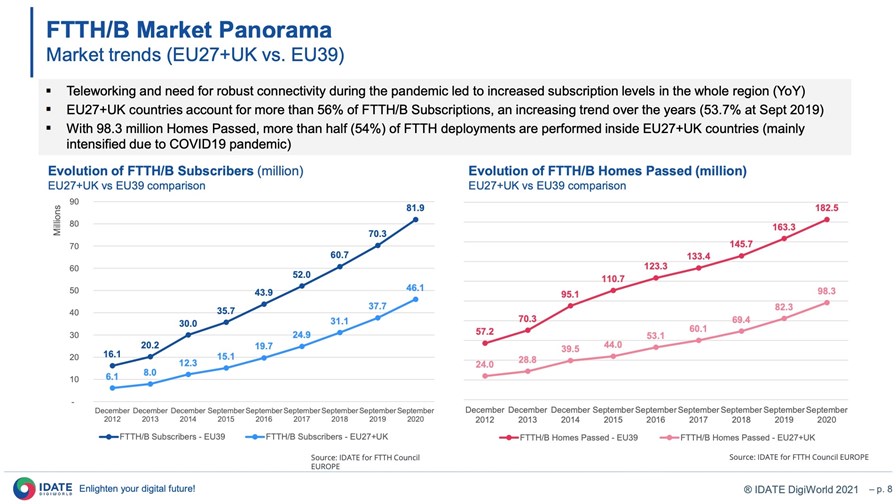 Europe is starting to look like a region with decent digital foundations: The latest report by research house IDATE for the FTTH Council Europe shows that 52.5% of homes in the region (comprising 39 countries) were able to subscribe to a fibre broadband connection at the end of September 2020, either directly via a fibre-to-the-home (FTTH) line or as part of a fibre-connected multi-dwelling building (FTTB).

In terms of total numbers, that means 182.5 million homes in the designated region could access fibre broadband, up from 163.3 million a year earlier, as the graph above shows. (The 39 countries included in IDATE’s research are: the 27 EU member states; four CIS nations – Belarus, Kazakhstan, Russia and Ukraine; and Iceland, Israel, North Macedonia, Norway, Serbia, Switzerland, Turkey and the UK.)

Russia has the highest number of homes passed at 49 million, followed by France with 21.4 million and Spain with 15.9 million.

And alternative operators are responsible for the majority of the build-out, accounting for 57% of premises passed thanks to the growing numbers of fibre broadband network build specialists in countries such as Germany and the UK (for example, Cityfibre and Community Fibre), where rollout and uptake rates are still trailing much of the rest of the region (though catching up): IDATE has identified about 400 FTTH/B initiatives across the 39 nations in its study. Incumbent network operators account for 39% of homes passed (down from 41% a year earlier), while municipalities and utilities account for the remaining 4%.

In terms of live, commercial connections, there were 81.9 million at the end of September 2020, up from 70.3 million a year earlier: That gives the region a “take-up” rate of 44.9%, compared with 43.0% a year earlier. “Teleworking and need for robust connectivity during the pandemic led to increased subscription levels in the whole region,” noted IDATE principal analyst Roland Montagne in his thorough report, FTTH/B Market Panorama in Europe.

Russia accounts for a big slice of those fibre broadband connections, with more than 23 million, while Spain has 11.3 million and France 10.3 million – between them, these three countries account for more than half of all FTTH/B connections in the region. Apart from these three, no other country is anywhere near double figures (see slide 19 in the IDATE presentation).

But what about national uptake? Iceland is doing the best here, with 70.7% of households signed up to a fibre broadband service (all FTTH), followed closely by Belarus (also all FTTH). Spain comes in at 62.9%, again with all being direct connections, followed by Sweden with a 61.8% service penetration rate, though the vast majority of these are via a FTTB connection.

There’s lots to check out in the report, with slide 25 a particularly interesting one, as it shows which countries still have “the most work left to do” to achieve full fibre broadband penetration. Germany, the UK and Italy lead the way here, but encouragingly the report also shows that fibre broadband rollouts are accelerating now in these countries and, indeed, only this week BT added 5 million extra premises to its fibre access network rollout plan (though it’s seeking a co-investor to soak up some of the £3 billion additional capex spend this will require).

And an interesting note was added at the end of the report about fixed wireless access (FWA): While there are many positive trends in Europe’s fibre broadband sector, including favourable regulatory regimes to help advance national digital plans and technology advances, Montagne notes that “Gigabit Capable FWA (60Ghz) is becoming more common in isolated areas, thus will delay FTTH deployments in some regions,” and that in addition to the competitive alternative of DOCSIS 3.1/4.0 as deployed by the cable operators and advances in Gfast technology to prolong the useful life of copper, “5G technology used in high spectrum bands (26 GHz) can directly challenge FTTH in the fixed residential market.”

Fibre access connectivity is certainly advancing in Europe, but it’s not the only option to deliver the broadband access needed for digital society developments.