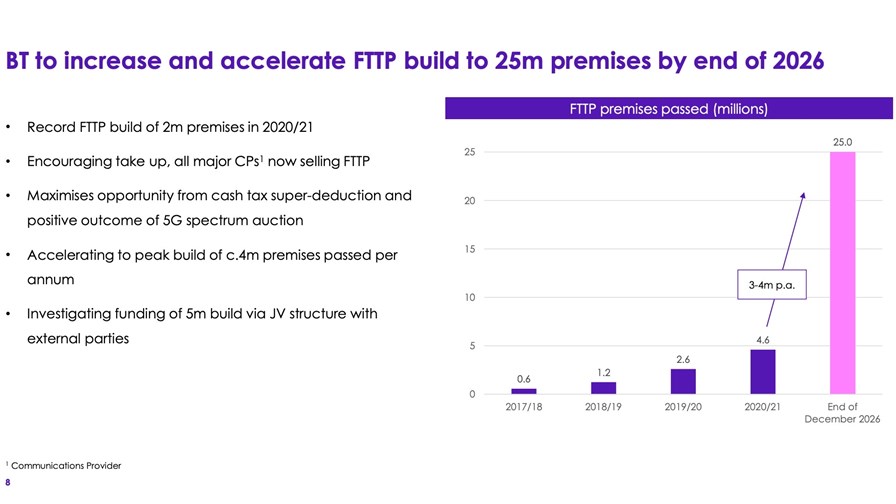 It’s a big numbers day in the telecoms industry, with investments and the impact of the Covid-19 pandemic hacking away at operator numbers.

BT is in bullish mood despite coming out the back of a tough financial year, during which revenues dipped by 7% year-on-year to £21.3 billion and adjusted earnings (discounting one-time items) fell by 6% to £7.4 billion, numbers that dragged the operator’s share price down by 6.6% to 158 pence on the London Stock Exchange. “BT comes out of this challenging year as a stronger business with an even greater sense of purpose,” noted CEO Philip Jansen. “After a number of years of tough work, and as we look to build back better from the pandemic, we’re now pivoting to consistent and predictable growth. We are building a better BT for our customers, for the country, for our shareholders and for those who work for this great company – now and in the future,” he added. While multiple parts of BT’s empire had a tough year, the star of the show was the operator’s wholly-owned but independent fixed access network division Openreach, which grew its revenues by 3% in the 12 months to the end of March to £5.24 billion and its adjusted earnings at the same rate to almost £3 billion. The full results press release is available here. And as a result of favourable regulatory and tax conditions, plus its build-out capabilities, Openreach plans to accelerate its fibre-to-the-premises (FTTP) rollout to target 25 million premises passed by December 2026, up from its previous 20 million target, and will explore joint venture opportunities with external parties to fund this, a move that makes sense given the current appetite from private equity groups to invest in digital infrastructure projects. The additional capex cost of adding 5 million premises to the target is about £3 billion, and takes the total capex bill for the FTTP rollout to about £15 billion. Openreach currently passes 4.6 million premises. (See BT to increase and accelerate FTTP build to 25m premises by the end of 2026.)

In a separate development for the UK incumbent operator, its BT Sport TV unit has once again landed a share of the rights to broadcast live English Premier League matches until 2025, following a decision by the Premier league to roll over its current agreement: That means Sky Sports, Amazon prime Video and the BBC are also included in the deal. The decision likely makes it easier for BT to find a co-investor in its Sports unit, something it is seeking as fibre and 5G rollout investments weigh on its finances. And as aggressive sports streaming player DAZN didn’t get a piece of the action this time around, this “puts BT in a far stronger position in forging a strategic deal with DAZN, otherwise the streamer will be forced to wait another three years at a minimum to get these lucrative sports rights,” noted industry analyst Paolo Pescatore of PP Foresight in comments shared with the media. Interestingly, BT noted in this announcement that it doesn’t know yet how much it will be paying for the rights for the 2022-2025 period.

VMware has appointed Raghu Raghuram, its current Executive Vice President and Chief Operating Officer, Products and Cloud Services, as its new CEO, stepping into the role vacated by Pat Gelsinger, who left earlier this year to become the new CEO at Intel. “VMware is uniquely poised to lead the multi-cloud computing era with an end-to-end software platform spanning clouds, the data center and the edge, helping to accelerate our customers’ digital transformations,” noted Raghuram. VMware also announced preliminary first quarter financials, including revenues of almost $3 billio, up by 9.5% from the same period a year ago. Read more.

Disruptive alternative mobile operator Rakuten Mobile is gaining greater traction in the Japanese mobile market but also amassing some major financial losses as it accelerates its network investments to achieve national coverage. The operator, which is building out a virtualized 4G network and a 5G network based on Open RAN functionality now has 4.1 million “customer applications,” and its Mobile business revenues grew almost 39% to 68.63 billion Japanese yen ($630 million) for the first quarter of this year. But the costs of network construction (it now covers 80% of Japan’s population) and of domestic roaming charges from KDDI (to enable coverage for its customers while the network is being rolled out) pushed Rakuten Mobile’s operating loss to ¥97.25 billion ($886 million). The operator also noted that “multiple global customers are already using parts” of its virtualized Rakuten Communications Platform (RCP), which provides cloud-based mobile network functionality to service providers and enterprises, in their networks: In March, Etisalat announced it was developing network blueprints based on RCP capabilities. Read more.

Telefónica has reported revenues of €10.34 billion for the first quarter of 2021, down by 1.3% like-for-like compared with a year earlier and down by 9% in reported numbers. But it managed to more than double its net profit to €886 million compared with the first quarter of last year, and ended March with 347.4 million connections, up by 1.5% year-on-year. Read more.