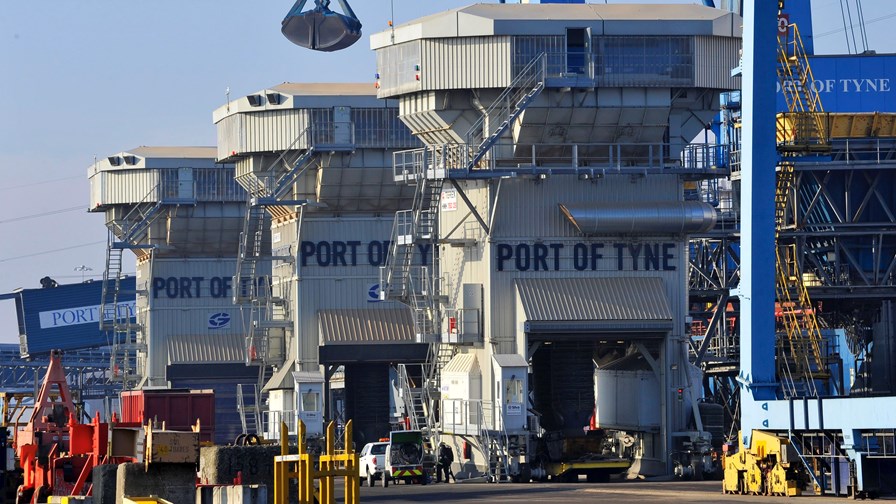 A major private networks deal in the UK, cold sweat time for US 5G challenger Dish Network, and some Maverick moves by the ‘Un-carrier’ top today’s pile of news tidbits.

The Port of Tyne in the north-east of England has turned to the UK national operator BT and its partner Ericsson for the deployment of a hybrid 4G/5G private network and associated surveillance and smart technology. According to the port, the network, which builds upon work already carried out as part of the facility’s in-house innovation programme (the 2050 Maritime Innovation Hub), will be up and running later this year to “provide fast and low latency connectivity across the port’s entire estate, opening up the potential for the development and implementation of both established and emerging technology”. The port’s tech team has already identified two initial use cases – a quayside operational optimisation programme and optical character recognition (OCR) container tracking – with “scope to expand 5G coverage for future use cases in years to come”. Matt Beeton, CEO of the Port of Tyne, commented: “5G is an enabler and offers us huge potential to implement world-class technology applications and drive real progress in the port and maritime sectors. We already have a range of use-case scenarios developed through the Innovation Hub and are ready to collaborate with technology companies to validate these exciting new solutions.” BT and Ericsson recently brokered a “multimillion-pound new joint partnership to provide commercial 5G private networks for the UK market”, with Port of Tyne the first public example of success since the relationship was announced, though the duo have previously built a private 5G network for Belfast Harbour.

It’s crunch time for Dish Network, the US mobile network newcomer that has spent the past couple of years building an Open RAN-based 5G network: The deadline for Dish to make its 5G services available to 20% of the US population is today, 14 June, and while there are still a few hours of the day remaining (as this article was being written), it would be a minor miracle for the operator to make the cut as, so far, it has only offered its service in Las Vegas. Dish noted earlier this year that it was gearing up to launch its 5G service in 125 cities across the US, but the lack of announcements from the company is somewhat concerning. So if it doesn’t pull the 5G rabbit from the magic hat before the end of today, what will happen? In theory, the US regulator, the Federal Communications Commission (FCC) would have the right to revoke its licence and levy financial penalties, but it’s hard to see the former happening (though the latter seems more of a possibility). Dish’s stock is down on the Nasdaq by 1.7% to $17.98 in early trading today: That could head further south in the absence of positive 5G news for the company and sink even lower if the deadline is missed and the FCC takes action.

T-Mobile US has tapped into the cultural zeitgeist by referencing an over-used Top Gun quote to boast about its latest 5G bandwidth achievements. The service provider says it aggregated three channels of mid-band spectrum – two channels of 2.5 GHz 'Ultra Capacity 5G' and one channel of 1900 MHz spectrum – to create what is effectively a 210 MHz 5G channel capable of delivering data speeds of more than 3 Gbit/s on its standalone (SA) 5G network. The milestone was achieved using a commercial device – the Samsung Galaxy S22 housing Qualcomm’s Snapdragon 8 Gen 1 Mobile Platform with Snapdragon X65 Modem-RF System – connected to T-Mobile’s live production network. "This test demonstrates the incredible power of mid-band spectrum and represents another huge step forward for standalone 5G," boasted Neville Ray, president of technology at T-Mobile. "Only T-Mobile is delivering a nationwide standalone 5G network to customers today, and we’re blazing a trail with new performance-boosting capabilities that generate incredible speeds and deliver on our vision to create the highest capacity network in the country." And the Top Gun quote? T-Mobile channelled Tom Cruise character Maverick to open its overly self-praising press release with the words: “The Un-carrier feels the need. The need for speed.” We kid you not.

Bharti Airtel has announced what it claims to be “India’s first multiplex” on the Partynite Metaverse, a blockchain-powered digital parallel universe developed by Gamitronics. Its Xstream multiplex is a 20-screen platform that offers access to immersive experiences when users watch content from “leading” over-the-top (OTT) players. The service also provides “multiple engagement layers” that allow users to interact in the metaverse. The multiplex offering acts as an extension of Airtel’s video streaming service, Xstream Premium, which hit two million subscribers within 100 days of its launch. “Airtel’s Xstream multiplex provides a larger-than-life experience, which brings together Web 3.0 apps and immersive storytelling, and an assortment of content from our partners”, said Shashwat Sharma, director of marketing at Airtel. Rajat Ojha, founder of Partynite, described Airtel Xstream multiplex as “one of the most scalable use case scenarios for the metaverse”. See more.

Aside from enabling a more enticing entertainment experience, virtual worlds can also be used to ease collaboration efforts between people in different locations. On this basis, Nvidia has unveiled a project that is enabling two UK-based engineering teams, located remotely, to work together on a digital twin of an electric vehicle (EV) battery. The project is using edge computing and “the world’s first 5G-enabled VR [virtual reality] technology” which helps achieve fewer inefficiencies and quicker design processes, according to the company. It is being carried out by Hyperbat, a UK-based EV battery manufacturer, while other participants including BT, Ericsson, the GRID Factory, Masters of Pie and Qualcomm, have developed a proof of concept that uses VR to power collaborative sessions.

Zain Group has partnered with Atos to provide products and services to its business customers in the Middle East and North Africa (MENA) targeting the digital transformation of enterprises. Through its digital and ICT solutions arm, ZainTech, the Kuwait-based operator said it will offer state-of-the-art managed cybersecurity solutions to monitor, contain and “respond to threats 24/7”, in addition to cloud solutions to help enterprises deliver innovative digital technologies. As part of the partnership, it will also provide the Atos Computer Vision Platform, an end-to-end video analytics platform that offers pre-trained and customisable AI models to businesses, governments and communities. Zain believes the collaboration with Atos will allow it to “deliver best-in-class support to customers regionally”, starting with its home market. The opportunities in the market are tipped to grow continuously, with Gartner predicting IT spending in MENA to reach $1.7bn in 2022, a year-on-year increase of 2.6%. Find out more.

The Fiber Connect show has opened its doors in Nashville, so you can expect to hear plenty of strained references to country music classics this week as we reference the news announcement highlights from the event. First to walk the line (sorry Johnny...) is Nokia, which is showing off prototype passive optical network (PON) gear capable of delivering 100 Gbit/s downstream over a single wavelength using advanced digital signal processing (DSP) technology. It wasn’t that long ago that 100 Gbit/s was exciting network operators looking to beef up their metro and long-haul networks, so the fixed broadband access sector has come a long way (spurred on, of course, by the fact that operators are actually laying decent volumes of fibre lines in their access networks these days). Read more.

The long-promised benefits of network slicing have so far failed to manifest themselves in any meaningful way, but will the introduction of 5G standalone (SA) core platforms be the catalyst for some real-world use cases? Amdocs says it has successfully demonstrated some “next-generation experiences and on-demand connectivity for consumers and enterprises through the deployment, management and monetisation of 5G network slices” in a proof of concept (PoC) conducted with Telekom Austria. Amdocs says its technology was used to “demonstrate end-to-end lifecycle management of 5G network slices and virtualized applications over public/private cloud and edge, including design, build, instantiation, modification and termination, with automatic closed-loop capabilities”. The vendor added that it "showcased the monetization potential of next-generation 5G SA by creating new and innovative commercial models that are aligned with 3GPP standards, including a simulated customer-facing portal for ordering network slices. The conclusion of the PoC was that both design time and time to market were significantly reduced, from hours or days to just minutes." The fabulously named Juergen Wolf-Hofer, head of network evolution at A1 Telekom Austria Group, noted: “We are delighted with the results of this project, which underlines the exciting possibilities of 5G and Amdocs’ vital role in enabling the deployment and monetization of 5G network slices. The deliverable use cases that were demonstrated in relation to Amdocs’ end-to-end service and network orchestration solution are very exciting. We will take the learnings from the project and apply them as we look to introduce next-generation 5G services to our consumer and enterprise customers.” Read more.

Italy’s minister for technological innovation and digital transition has awarded a contract worth €725m to Telecom Italia (TIM) for the deployment of 5G networks. The tender includes funding for up to 90% of the work, which will be carried out in six areas in Italy. Any other interested operators will also receive wholesale access to the financed infrastructure. According to the government, the goal is for more than 11,000 mobile radio sites to be connected by optical fibre by 2026; these are tipped to serve as the backbone of high-speed 5G networks. The initiative is part of Italy’s Recovery and Resilience Plan, which will see total investments of €6.7bn for the widespread deployments of 5G and fibre, alongside measures to create cutting-edge technologies applicable for Industry 4.0 and to digitalise the public administration of the country. Read more (in Italian).

The CEO of network operator Veon, Kaan Terzioğlu, has praised the efforts of the company’s team in Ukraine, where mobile operator Kyivstar is Veon’s local operation. Since Russia invaded Ukraine in late-February, “more than 3,400 repairs of base stations have been performed, and some 26,500 metres of broken fibre-optics have been replaced,” noted the CEO in a public letter to investors. “More than 90% of Kyivstar’s network is still operational. We have added 100 new base stations across the western part of the country and upgraded hundreds more with the latest technologies to enable uninterrupted communications,” he added. Read more.