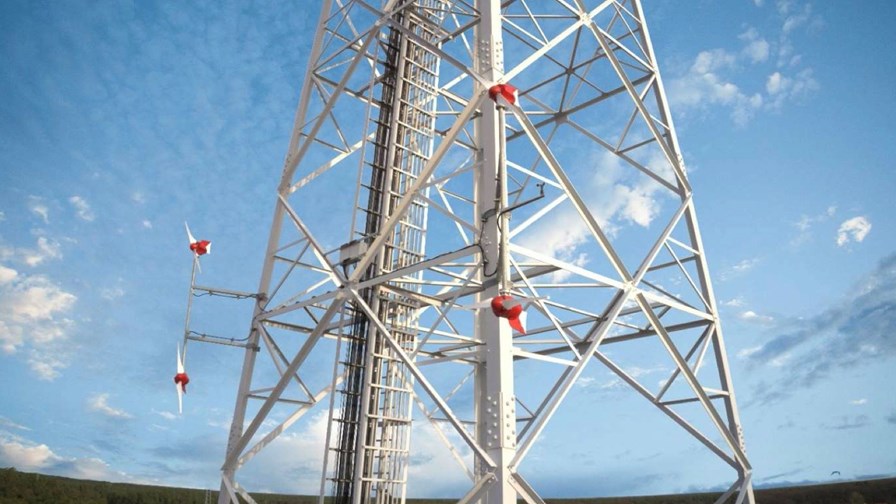 In what looks like a key breakthrough that should capture the attention of network operators all over the world, Vantage Towers, the neutral host towers spin-out from Vodafone, says a new initiative to add micro wind turbines to its structures could reduce site electricity bills by two thirds and possibly even more.

The green energy effort is taking place in Germany, where Vantage Towers has brokered a partnership with Berlin-based wind energy startup MOWEA that will result in the two companies installing around 752 micro wind turbines on 52 structures owned by Vantage Towers across Germany as part of a pilot project.

And here’s the big takeaway from this initiative: “Under average wind conditions, the turbines are capable of reducing grid power consumption and electrical running costs at each of the Vantage Towers sites by up to two-thirds and more,” notes the operator in this announcement.

It adds: “The wind energy generated by the turbines is not fed into the grid. Instead, it is used directly at the sites to power the active equipment of Vodafone, Vantage Towers’ largest customer. Installation of the MOWEA micro wind turbines is scheduled for the second half of the year, provided that all necessary permits have been issued by then.”

The pilot project has been a long time in development and planning: The organizations have been collaborating since late 2019 to overcome various technical challenges associated with in integration of wind energy systems and telecoms towers, but now MOWEA believes its wind turbines, which have “communication interfaces for smart remote maintenance and control, an algorithm to maximise performance, integrated brakes for higher levels of safety, and seamless connectivity to standard battery and energy management systems” are ready for an extensive in-the-field trial.

And, importantly, the wind turbines operate “independently of conventional energy sources, which makes them suitable for remote locations,” notes Vantage. “Unlike solar panels, the wind turbines generate power at night, so they can be used in conjunction with photovoltaic systems.”

Vantage Towers has about 19,400 towers across Germany (of which about 4,460 are ground-based towers in suburban and rural areas and the remaining 14,940 are rooftop towers), so there’s plenty of scope for further expansion in Germany and, it seems in other markets. (Vantage Towers is active in 10 European markets.)

“We are very excited about the strategic partnership with MOWEA because it enables us to generate cost-efficient and maintenance-friendly renewable energy at selected sites with their wind turbines,” noted Vantage Towers CEO Vivek Badrinath. “It also represents an important step forward towards a greener future and the sustainable digital transformation of Europe. We have more than 82,000 towers in Europe. So, if the pilot project is a success, there is clear potential for the future expansion of the partnership.”

This isn’t the only wind turbines effort underway within the Vantage Towers group: Cornerstone, the UK towers company that Vantage co-owns with Telefónica, is collaborating with Vodafone UK and Crossflow Energy to check out the potential of wind turbines combined with solar panels and new types of batteries for deployment in remote areas. (See Vodafone will follow the dictum of Robbie Burns and 'let the wind gang free' to self-power new phone masts and boost rural coverage.)

The Vantage Towers announcement is timely, as it’s been a week of focus on sustainability strategies and agendas at TelecomTV, as we held our Green Network Summit that took a deep dive into the challenges and opportunities associated with sustainable mobile network deployments, ways in which to measure energy efficiency in telecoms networks and much more.

And as if to confirm that this is a topic of growing importance for network operators on a number of levels (not least economic), other big names have also announced new, related developments and provided key updates.

In the US, Verizon has struck seven new Renewable Energy Purchase Agreements (REPAs) for “an aggregate of approximately 910 megawatts (MW) of projected renewable energy capacity. These agreements position the company to achieve its goal to source or generate renewable energy equivalent to 50 percent of its total annual electrical consumption by 2025,” the operator announced in this press release.

And in the UK, BT reminded us that it has teamed up with major utilities companies to develop a digital twin “that aims to increase climate resilience in the face of changing and unpredictable weather patterns. With our partners Anglian Water and UK Power Networks, and with the help of the National Digital Twin programme, the collaboration is helping to build a digital twin across energy, water, and telecoms networks,” notes BT in this update.

Other recent green initiatives of note include: