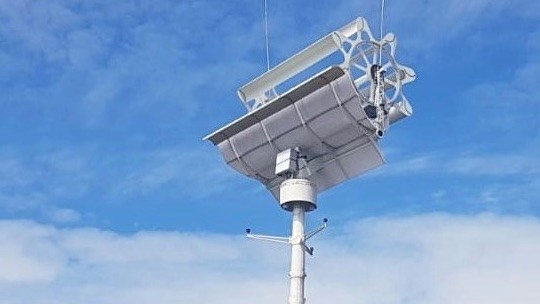 When the artist John Constable painted The Hay Wain, a picture of a wooden-wheeled farm wagon axle-deep in in the River Stour on a hot summer’s day in 1821, many of those who subsequently saw the work on display at the Royal Academy in London would have been unaware that they were looking at a depiction of an old technology in action.

The cart is in the river because the summer weather is shrinking the spokes and other wooden parts of the wheels and causing the iron wheel rims to come loose. To get them tightened-up and, literally, to keep the show on the road, the carter enjoys a lazy afternoon snooze whilst waiting for the water to do its work, expand the wood and so hold the iron hoops tightly in place.

Two hundred years later the latest manifestation of mast and antennas for mobile networks is causing some concern, scarcely surprising when they look like the rotating drum from the business end of a combine-harvester perched atop a high metal pole and going round like the clappers. Vodafone’s new range of 'Eco-Tower' 4G and 5G phone masts are rather in your face and disturbing to the line of the horizon as well as to the delicate sensibilities of some telecoms equipment aesthetes. Admittedly, the masts are not particularly pretty, but they are important because they are self-powered by renewable energy and central to Vodafone’s public pledge to achieve Net Zero in the UK by 2027 - and 2040 in other parts of the world.

Having promised to cut emissions and be greener than Kermit the frog after a blowout 12-course chlorophyll banquet, Vodafone is partnering with Crossflow Energy and Cornerstone to build and deploy masts that will free the telco from the need to install expensive connections to electricity supply sources and grids. What’s more, and equally important, Vodafone says the new wind-turbine technology, in combination with solar panels and new batteries, will provide broadband connectivity to the Britain’s most remote rural areas (and, in due course, to other parts of the world as well). Vodafone’s ambitious plans chime with the aims of the UK’s Shared Rural Network (SRN), a £1 billion initiative to provide 4G mobile coverage and services to 95 per cent of the entire country by 2025.

Andrea Dona, the Chief Network Officer of Vodafone UK, commented, “We are committed to improving rural connectivity, but this comes with some very significant challenges. Connecting masts to the energy grid can be a major barrier to delivering this objective, so making these sites self-sufficient is a huge step forward for us and for the mobile industry. Our approach to managing our network as responsibly as possible is very simple: we put sustainability at the heart of every decision. There is no silver bullet to reducing energy consumption, but each of these steps forward takes us closer to achieving net zero for UK operations by 2027.”

Since 2019 Vodafone has been working on the design of the new wind turbines with Crossflow Energy of Port Talbot in South Wales, and the first trial Proof of Concept deployments will go live before the end of the year. The masts carry what are called Transverse Access Wind Turbines.

Meanwhile, Vodafone’s network partner is Cornerstone, the UK towers joint venture in which Vodafone Group's spin-out, Vantage Towers, owns an equal share with Telefónica: It has more than 14,000 tower sites across the UK. The trials will provide evidence of the efficacy of locally generated renewable power and the reduced environmental impact of the technology, including removing reliance on polluting diesel generators currently requited to provide pack-up power in the event of outages.

Martin Barnes, the CEO of Crossflow Energy, said the trials are “a fantastic opportunity to show how our self-powered Eco-Tower solves the problem of harnessing ‘small wind’ to offer not just that all important carbon reduction but also significant commercial benefits. In the case of Vodafone, it will help to accelerate the expansion of rural connectivity, transform energy consumption patterns and deliver significant economic and carbon savings."

Rhys Philip, Cornerstone’s CEO, said his company “is committed to sustainability and safeguarding the future of our planet. Piloting exciting initiatives like this with our partners and customers can only help us develop better ways of contributing to a sustainable, net-zero carbon emission future while ensuring a connected Britain.”

The initial trials will also demonstrate that the new wind turbines and towers are remarkably quiet, bird-friendly and thus eminently viable for use in “the most sensitive of sites, including Areas of Outstanding Natural Beauty.” It is expected that following the trial period, the solution will be rolled out across the UK and that people will appreciate that the technology, whilst not exactly supremely beautiful in itself, is technologically advanced but unobtrusive enough to be placed in even the most striking of settings.

In any event, the new masts are nowhere near as obtrusive and ugly as the massed ranks of electricity supply pylons that, since the 1930s, have been marching across the country carrying high voltage power cables.

With the festive season almost upon us, many farmers fields are full of the Brussels sprouts that are the traditional accompaniment to British Christmas dinners. It is not known if any of the Vodafone trials are causing a commotion in such “small wind” environments. We await reports.