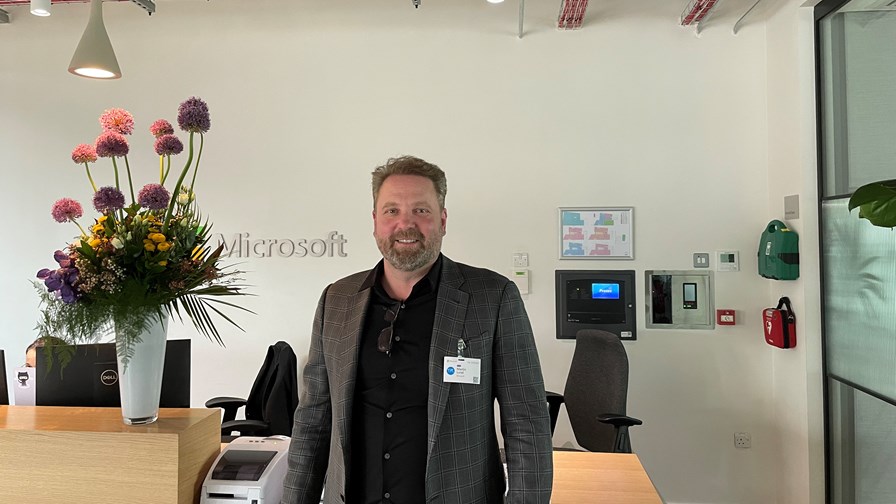 Martin Lund, CVP of Microsoft, at the launch of worldwide engineering development centre in Enfield, UK.

Microsoft has officially opened a new global engineering development centre in Enfield on the northern outskirts of London, UK, as it seeks to engage with UK network operators and ensure its Azure for Operators (AfO) cloud platform is part of their 5G plans.

The company’s CVP (Corporate Vice President) for AoF, Martin Lund (pictured above), told TelecomTV the hub is optimised for collaboration and innovation, and designed as “a good place for our engineers to express their creative and engineering abilities.”

The centre currently houses around 500 people, the majority of them being software engineers, in addition to quantum physicists and biology specialists. The company hires as many as 50 graduates per year and trains them to be telecoms technology specialists, with a particular focus on 5G. The technology being developed in Enfield is designed with the global market in mind and not just for the UK market, Lund explained.

That Enfield is the location for this latest global hub will not come as a surprise to those who know AfO’s history, as Metaswitch, which was acquired in May 2020 for its telecoms expertise by Microsoft, has been operating in the area since 1981 and is “in proximity to where the most important markets and customers are,” according to the company. The need for the new facility emerged when executives realised they were running out of space for the growing workforce prior to the global Covid-19 pandemic.

Luring UK operators to the cloud

The Microsoft executive, previously the CEO of Metaswitch, said the company is engaged with “a number of operators” in the UK, including some of the largest, as part of its AfO proposition. “We are collaborating deeply with several of them on the journey of leveraging the public cloud,” Lund said, though he didn’t provide detailed examples.

He described the telco sector as a big opportunity for the tech giant, as the sector is currently lagging behind other verticals with respect to the adoption of the public cloud due to its unique requirements for reliability, security and other specifications for ‘carrier-grade’ infrastructure.

“What we’re doing with the operators in the UK, among others, is to find ways to deliver that carrier-grade technology solution, leveraging the public cloud… We’re doing some advanced work in that space” and breaking new ground to enable that, noted Lund.

He added that most of the UK telcos currently work with Microsoft in some capacity in their network operations, but when it comes to its cloud platform, it is “at a different state – with some, it’s not live, at others it’s about to go live.”

According to Lund, moving to AfO would make operations of telcos “faster, better, cheaper.” He highlighted three “phases of enlightenment” of using hyperscale technology. The first one saves capital expenditure (capex) by removing the need for purchasing more servers and storage. The second benefit, he added, comes from saving operating expense (opex) through automating the core network.

“But the real, third phase of enlightenment is about new services – because once you’re running your network in a hyperscale way, it’s programmable, automated and elastic, you can bring on new services and capabilities that in the past you couldn’t,” Lund argued.

He shrugged off the suggestion that Microsoft is not as embedded with UK telcos as its main hyperscaler rivals AWS and Google Cloud, even though AfO currently cannot boast a major multi-year deal with a UK operator similar, for example, to the major long-term deals BT Digital has recently announced with AWS and Google Cloud. (See BT embraces ‘The Digital Way’ with Google Cloud and Now BT Digital taps AWS for IT efficiencies.)

Lund claims that what Microsoft has in store is different. “Both Google and AWS don’t have the same DNA for telco that Microsoft acquired with Affirmed and Metaswitch. We know how to build networks that are carrier-grade, our engineers have done that for decades… What we’re doing is trying to deliver value and innovation at the network level, the core business of the operator, not the IT stack per se,” Lund noted.

That may be, but such deals are not yet evident: And while it is still relatively early days for the telco/hyperscaler relationships, Microsoft’s lack of telco industry traction with the cloud-based core platform it has developed with and for AT&T is being noticed. (See Azure builds on AT&T’s Network Cloud, offers 5G Core solutions.)

Here is what Caroline Chappell, Research Director, Cloud, at Analysys Mason, had to say last month when commenting on Google Cloud’s acquisition of MobiledgeX: “Google is successfully winning operator minds and wallet share compared with the other big cloud providers. It is leading in terms of the number of what we call ‘multi-domain’ partnerships it has with operators – these are 5-10 year multi-billion-dollar deals that transform multiple aspects of an operator’s business, e.g. across IT, network and enterprise services domains. Google announced such deals with Bell Canada, Reliance Jio, Ooredoo and Telenor in the second half of 2021, adding to longer-term relationships it’s had across domains within Telecom Italia and XL Axiata. We have seen one other such multi-domain deal from AWS, but Azure seems to be struggling to turn its early lead in the enterprise domain into comprehensive IT and network transformation deals, with the exception of its deal with AT&T.”

But, it should be stressed, it is still early days, and it’s not that Azure doesn’t have relationships with the likes of BT and Vodafone... it does: It’s just that those engagements are not yet in the top tier of telco transformation projects, as Chappell noted.

But as Lund stated, there are deals in the pipeline and the Enfield facility, it is hoped, will help take telco relationships to the next level.

Lund also highlighted the importance for operators to modernise because the sector is an enabler for other industries to transform as well. “In order to realise Industry 4.0, you have to have modern communication services,” he underlined. Accelerating this process, he added, will make telcos “an even better partner to the enterprises”.

The new development centre is also notable for its sustainability aspects: It has multiple collaboration and open-air areas, a ‘green’ rooftop covered with plants, glazed windows to reduce any heat coming in from outside which brings down the need for air conditioning, electric charging and biking parking options. The facility, which spans 60,000 square feet, is also said to exceed the carbon emissions standard set by UK building regulations, including Greater London Authority’s Energy Planning Guidance as of April 2020. 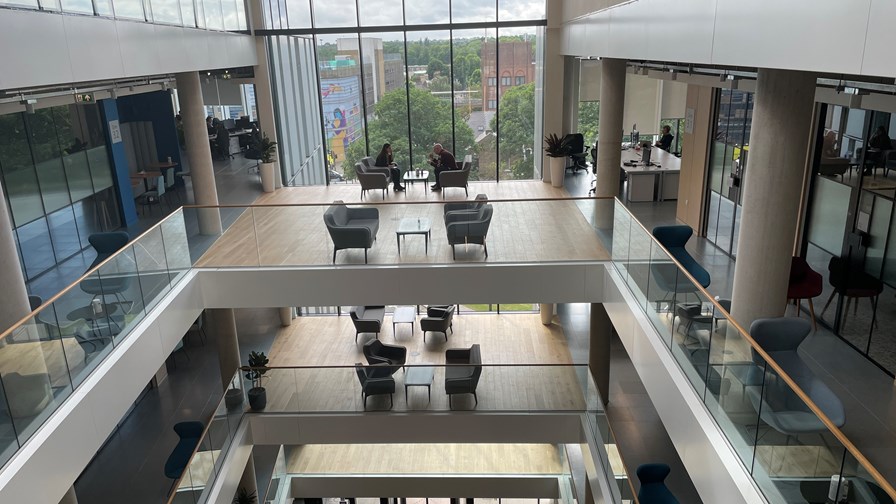 Lund acknowledged he doesn’t know the exact price tag for building the centre but noted that it was a more expensive option due to its sustainable features. But the investment is worth it, he argued, as the company is “in the business of having the best and the brightest engineers”, the majority of whom care about sustainability and place it as a high requirement when picking an employer.

“I think the only right thing to do is to invest significant effort and money into the small things we can do to improve the climate crisis, essentially,” Lund said.

The facility also houses a 5G testbed and among its use cases are two robot barmen that shake-up specifically created cocktail recipes such as ‘The 5G’ and ‘The AfO’... now, that’s what we call meeting customers’ needs! 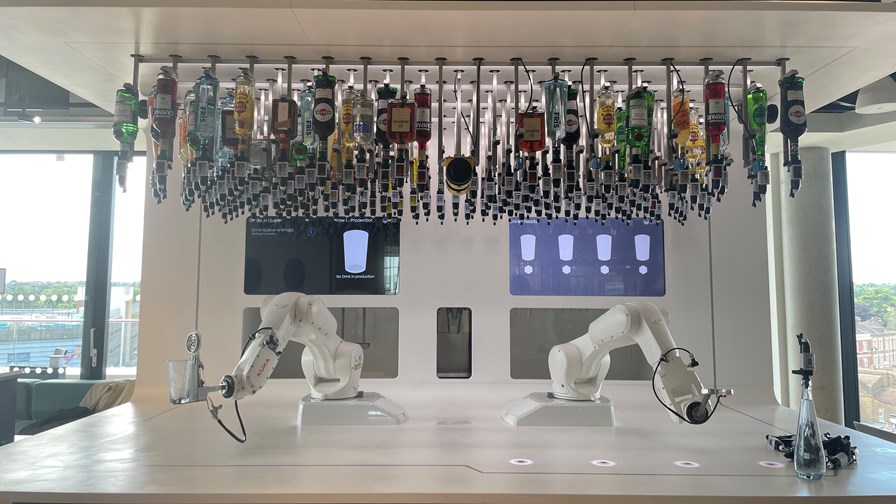