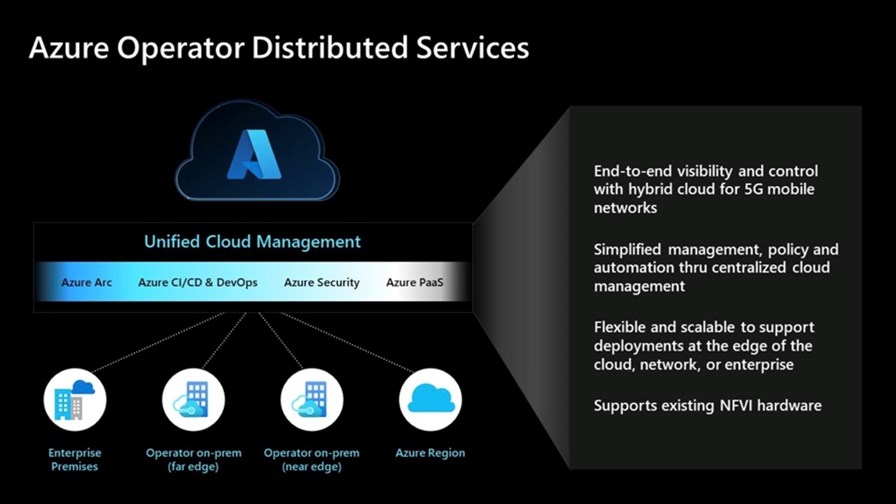 BARCELONA – Mobile World Congress 2022 – Microsoft Azure has unveiled a “next-generation hybrid cloud platform for operators,” called Azure Operator Distributed Services (but which hopefully nobody will call ‘AODS’), that builds on the AT&T Network Cloud 2.7 Software technology the hyperscaler acquired from the giant US telco last summer.

“We’ve taken the acquisition of this technology, moved the engineering and program organization from AT&T’s Network Cloud organization into Azure for Operators, and directly integrated the intellectual property into a new Azure offering,” notes Jason Zander, EVP, Strategic Missions and Technologies at Azure, in this blog.

“We continue to make significant enhancements to the acquired technology itself, including security across AT&T’s entire Network Cloud deployment… [Azure Operator Distributed Services] combines the enhanced version of the acquired AT&T technology with the best of Azure, including our industry-leading security, monitoring, analytics, AI, machine learning, and so much more… It will enable operators to run all their workloads (such as core, RAN, mobile and voice core, OSS, and BSS) on a single carrier-grade hybrid platform,” he adds.

The resulting product can run either in Azure’s public cloud or on a telco’s own cloud systems: At AT&T, for example, it is being developed and prepared to run on the operator’s on-premises IT, with initial testing stages set for later this year.

And it’s that reference that is going to help Azure. “Azure Operator Distributed Services is designed to support the AT&T mobile core network that today spans more than 60 containerized network functions (CNFs) and virtual network functions (VNFs) from 15 different vendors, which currently are deployed and running on the AT&T Network Cloud platform,” notes Azure.

“AT&T's 5G network is built on an agile, future-ready mobile core that's designed to boost innovation, resiliency, and security for our customers. Our 5G mobility core is fully cloud-based, integrating Network Functions from multiple vendors that today are hosted on Network Cloud infrastructure based on a cloud software stack that Microsoft acquired from AT&T last year,” noted Andre Fuetsch, Executive Vice President and CTO Network Services, AT&T. “We are pleased with Microsoft’s plan to evolve Network Cloud and integrate it with Azure technologies to create hybrid telco-grade Azure Operator Distributed Services. This will enable AT&T and other operators to host Network Functions on clouds spanning telco premises and public cloud and will help us realize the many benefits of the cloud-native approach and Azure innovation including additional speed, resiliency, security, cost, and operational improvements,“ added Fuetsch.

Importantly, Azure notes that it cannot access or see the customer data of any company that decides to use Azure Operator Distributed Services.

Take all these elements together and Azure is covering an awful lot of ground in terms of combining cloud platform and key communications networking capabilities. The big question for the industry is how such developments change the dynamics of the traditional relationships between vendors, operators and customers: Azure notes that it’s working with Ericsson and Nokia on Azure Operator Distributed Services, with both vendors enabling multiple functions to run on Azure’s telco cloud infrastructure, but ultimately such developments are levelling the playing field and broadening competition in the vendor market, which is good news for operators but not so much for technology suppliers that are struggling to adapt.