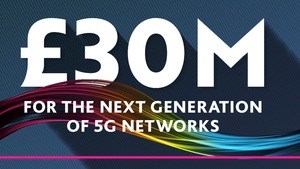 The UK government has launched a £30 million competition that aims to discover and fund talented Open RAN specialists.

Called the Future RAN Competition (FRANC), it is being organised by the department for Digital, Culture, Media and Sport (DCMS), which is on a mission to increase choice in the UK's telecoms supply chain after it instructed operators to remove equipment produced by Huawei from their networks by the end of 2027.

To be in with a chance of winning a chunk of the prize fund, entrants will need to demonstrate how their innovative solution will fast-track the availability of viable Open RAN products, and how it strengthens the case for further investment in the technology by government and business.

Particular topics of interest to DCMS include power efficiency, spectrum management, advanced software platforms, systems integration and security. The deadline for entries is 27 August; winners will be announced in the autumn.

FRANC's arrival coincides with the growing number of operators in Europe and beyond that have committed to Open RAN deployments. However, it is worth noting that many of these telcos are taking it slowly. Open RAN rollouts have tended to focus on rural and underserved areas as opposed to dense urban environments. The industry is still figuring out how to scale the technology so it can support a massive volume of connections and data.

Funding from the government's new competition could help to speed up that process.

The launch of FRANC comes as the UK government moves onto the next stage of its £250 million 5G diversification strategy by forming a new independent body that will advise on how to increase choice in the telecom supply chain. Aptly titled the Telecoms Supply Chain Diversification Advisory Council, its establishment was one of the recommendations in a report produced by the government's Telecoms Diversification Taskforce.

This new advisory council will pick up where the taskforce left off, identifying potential supply chain issues in various areas of the network ecosystem and coming up with ways to tackle them. Simon Blagden, Conservative Party donor and former non-executive chairman of Fujitsu UK – which during his time there famously sued the government over a bungled NHS IT contract – will chair the new body.

The launch of FRANC and the new advisory council comes a week after the government cut the red tape on two new, £1 million labs tasked with accelerating the development, testing and launch of interoperable open networking solutions. The SmartRAN Open Network Interoperability Centres (SONICs) – one in London, the other in Brighton – are run by Ofcom and Digital Catapult, an innovation centre run by Innovate UK, a public body sponsored by the government's Department for Business, Energy and Industrial Strategy (BEIS).

With so much global enthusiasm for Open RAN and its potential to alter the telco vendor landscape, it will be difficult to judge the effectiveness or otherwise of the UK government's own initiatives. Nonetheless they provide a framework and a business environment that should give open networking technology an opportunity to thrive.