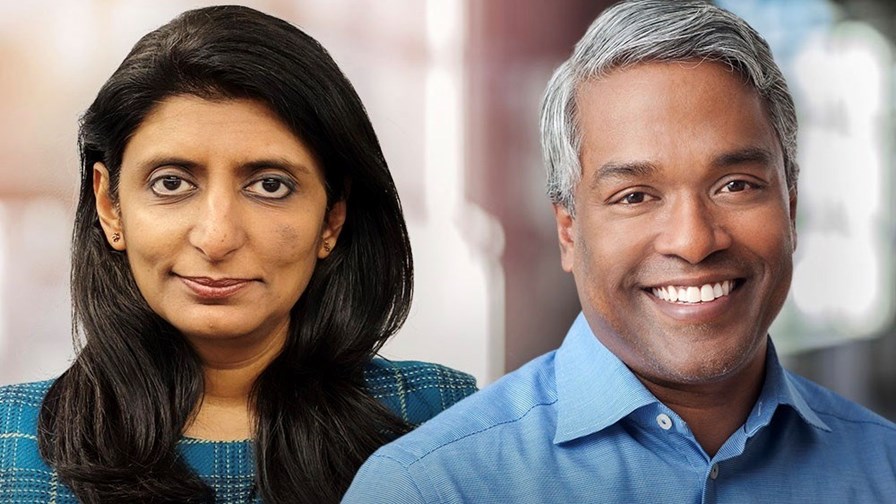 BT is the latest telco to forge a close relationship with Google Cloud to take advantage of the hyperscaler’s AI and data analytics expertise: The operator’s Digital unit, which was created last year under the leadership of Harmeen Mehta, has struck a five-year deal that, it hopes, will transform the telco’s operational culture and help it to develop a “cloud-first and AI-first strategy” that introduces much greater levels of automation.

The move towards greater engagement with the public cloud fraternity had been clearly signalled by Mehta (pictured above with Google Cloud CEO Thomas Kurian), who joined BT in April 2021 as Chief Digital and Innovation Officer.

During an interview with TelecomTV last October, she noted that the public cloud giants have ‘invested a lot in building some really rich feature sets” that companies such as BT can use to fulfil their goals. “Building ‘tech for tech’ is not what we are here for – we are here to use technology to build the right experiences for our customers and for our businesses... for our own colleagues.” She added, in reference to the hyperscaler fraternity, that “you will see us work very closely with them.” (See Public cloud to play a major role in ‘future BT,’ says Chief Digital Officer.)

And that’s exactly what’s planned with this engagement. BT plans to make use of a broad range of Google Cloud tools and services (cloud infrastructure, analytics, AI/ML, API management, security) to “deliver superior customer experiences, reduce costs and risk, and build new revenue streams” – and right now all CSPs, not just BT, could do with enabling all three of those in any way they can.

There’s the usual use of buzz terms in BT’s announcement – “hyper-personalized customer engagement” for example – but essentially this is about: Introducing new ways of working for the BT Digital team by learning from the way Google uses and exploits the vast volumes of data it has at its disposal (all within the rules and regulations, of course); figuring out the best way to automate the processes that turn raw data into useful information that, in turn, can be used by BT and its customers to their advantage; and identifying new revenue-generating opportunities.

Easier said than done, but impossible without sophisticated, large-scale data processing systems and top-class machine learning tools that can perform tasks and draw conclusions that would take current teams and manual processes too long to attain (if at all).

The ‘news ways of working’ part is absolutely critical: BT notes that Google’s Site Reliability Engineering (SRE) team will “partner with BT to foster a continuous delivery and ‘zero ops’ autonomous operations culture to accelerate product development and continuous innovation as part of the new culture of working that BT calls ‘The Digital Way.’” (Might this be referred to internally as the ‘Mehta-verse’? It certainly sounds like a new reality for the BT Digital team...)

Mehta makes it clear in her official quote about the relationship that this isn’t just a case of BT tapping into some Google Cloud servers and using its tools. “Our partnership with Google is one of a series of strategic moves that BT Digital is taking to help accelerate BT’s growth and digital transformation. This is a partnership that is deeper than just at the technology level,” she states.

The question is often asked about how telco teams will learn cloud native processes and adapt to software-oriented, data-driven and cloud-based ways of working – for BT Digital, the answer is that it’s going to be trained by the folks at Google Cloud.

BT has already started the process and aims to have migrated its data onto Google Cloud by 2023.

Of course, none of this comes cheap, but just how much this will eat into BT’s coffers is unknown, as neither party is revealing any financial details. Also unknown is what this means for the shape and size of the BT Digital team. Telcos often argue that adopting new agile, cloud native processes that enable greater automation will make them more efficient, but not necessarily lead to job losses: And that’s the case here, as BT says it does not expect this relationship to result in any job losses. But the BT team might take some persuading that this is indeed the case, so Mehta has a big task now to calm the BT Digital ranks and communicate just how things will change without people needing to be worried about their livelihoods.

Whatever the impact or outcome, there’s little doubt that this is the way to go for traditional telcos – the hyperscalers such as Google Cloud, Amazon Web Services (AWS) and Microsoft Azure have the hardware, software and know-how that CSPs need in order to become DSPs (digital service providers), especially when it comes to data processing, analysis and the introduction of automated processes: We can expect BT Digital to also announce partnerships with AWS and Azure in the future too, though BT says it doesn’t have anything to share on this front just now.

And for Google Cloud, the deal is another telco feather in its hat. In the past week alone it has announced relationships with: Middle East telco Ooredoo to “further advance [its] digital offerings”; Finnish operator Elisa, to jointly develop new services and further develop the telco’s digital operations; and Bell Canada, which is integrating Google Distributed Cloud Edge in its network. It has plenty of other relationships in the telecoms and there are sure to be many more to come.