BEIJING, Aug 7th, 2018 – According to preliminary data of the IDC Quarterly Mobile Phone Tracker, the Chinese smartphone market shipped 105 million units during the second quarter of 2018, resulting in a 5.9% year-over-year (YoY) decline. However, the pace of decline has narrowed compared to 1Q18 as channel activity normalized and new products were marketed.

IDC China's Senior Market Analyst Xi Wang said, "The market's average selling price (ASP) increased 15% YoY in the second quarter. This suggests that consumers are willing to pay more for a phone targeted for their needs, including not just better cameras but also emerging categories such as gaming. Time spent on mobile phones continues to rise, and vendors should emphasize aspects like industrial design, quality, and brand image to drive replacements in this market."

IDC believes that market leaders in China's smartphone market will continue to gain more share, marginalizing smaller players in the process. Large vendors have been transforming from a single-channel and single-segment focus to a multi-channel and multi-segment focus. Their heavy investments here make it more difficult for a smaller player to compete. 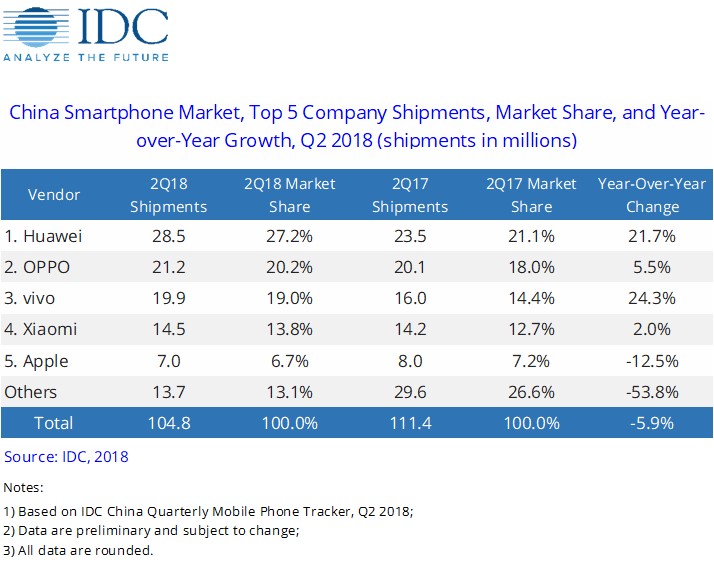 IDC expects a relatively flat market for China in full year 2018, although exchange rates and trade wars are downside risks to watch out for going into the second half.