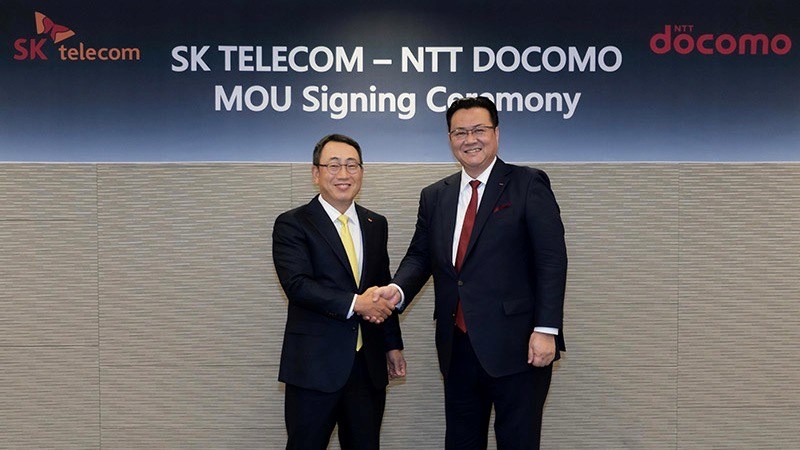 In today’s industry news roundup: Japanese and South Korean mobile giants team up to tackle 5G, 6G and extended reality, with a hint of K-pop and J-pop; Cellnex pauses for breath after M&A setbacks in Germany; UK’s Competition and Markets Authority (CMA) mulls probe of Broadcom’s acquisition of VMware; and much more!

Two of the most influential telcos in the world, Japan’s NTT Docomo and South Korea’s SK Telecom, are to collaborate on a range of next-generation technologies and applications, with 5G, 6G and metaverse developments the key areas of focus. Ryu Young-sang (pictured, above left), president and CEO of SK Telecom, and Motoyuki Ii (above right), president and CEO of NTT Docomo, have signed a memorandum of understanding (MOU) to cement the relationship. In the 5G sector, the partners will focus their joint efforts on 5G standalone capabilities, millimeter-wave (mmWave) deployments, energy-efficient networks, and the use of virtualised and Open RAN technologies, while joint 6G-related testing, that will align with the Innovative Optical and Wireless Network (IOWN) approach under development at Docomo’s parent company, NTT Group, will begin next year. Both operators have already launched their own metaverse services – SK Telecom’s ifland and Docomo’s XR World – and will “consider opportunities to jointly produce virtual content, including 3D models, volumetric videos and virtual cities, as well as explore possibilities for connecting their respective platforms over the long term,” according to NTT Docomo. SK Telecom went into greater detail about the metaverse-related collaboration in its announcement about the relationship, noting that it “includes co-creation of K-pop and J-pop content and applying them to both of their services. In particular, they will consider the idea of jointly securing intellectual properties (IPs) of popular games and animations in Korea and Japan, and jointly investing in metaverse-related content providers or mixed reality-related device makers. Moreover, SKT and NTT Docomo will operate a regular consultative body for cooperation in the metaverse business to share service and technology knowhow in the short term, and discuss connecting their services and implementing joint marketing in the longer term. By linking the metaverse services of the two companies, users of NTT Docomo’s metaverse service in Japan will be able to enjoy volumetric concerts of K-pop artists being provided by ifland. Also, ifland users will be able to take a virtual tour of major cities of Japan via NTT Docomo’s metaverse service.”

Spanish tower operator Cellnex Telecom is apparently exhausting options to keep investing in Europe, with its CEO Tobías Martínez telling the Financial Times that the company is stopping its aggressive M&A spree in the region for the next 24 months. The move was undertaken because of a “pretty much closed” towers market in the continent, as well as increasing inflation negatively affecting options to invest in new deals while asset availability is declining, according to the report. Now, the company is said to be shifting its focus towards debt reduction and limiting capital expenditure (capex). In the past few years, Cellnex has been very active in Europe, accumulating growth by boosting its tower portfolio through purchases from CK Hutchison in the UK, Austria, Denmark, Ireland, Italy and Sweden, from Polish operator Play and from Deutsche Telekom in the Netherlands. It also bought Polkomtel Infrastruktura in Poland and French tower company Hivory, previously owned by Altice Group – see Cellnex sales soar as European expansion deals kick in. However, more recently, Cellnex was unsuccessful in its efforts to acquire stakes in Deutsche Telekom’s towers unit (with assets in Germany and Austria) and Vodafone-owned Vantage Towers as it was beaten by rivals on both occasions, leaving it still without a significant presence in Germany – see Vodafone sells a slice of Vantage Towers for up to €7.1bn and Deutsche Telekom sells 51% stake in towers unit.

Whether or not the takeover of cloud and virtualisation specialist VMware by US-based chipmaker Broadcom will go ahead remains to be seen, with the UK’s Competition and Markets Authority (CMA) now considering an investigation into the merger. In its statement, the regulator explained that initially, it will look at whether the proposed merger may result in “a substantial lessening of competition within any market or markets in the United Kingdom for goods or services”. In a preliminary assessment until 6 December, the body is gathering comments from interested parties, after which it may proceed with a formal investigation into the matter. The $61bn acquisition is also under scrutiny from the European Commission, which received a notification from Broadcom about the merger on 15 November and reportedly has until 20 December to decide whether further investigation is required.

What about this for a storyline!? Disney has axed its CEO, Bob Chapek, and replaced him with the previous chief, Bob Iger! “Iger, who spent more than four decades at the Company, including 15 years as its CEO, has agreed to serve as Disney’s CEO for two years, with a mandate from the Board to set the strategic direction for renewed growth and to work closely with the Board in developing a successor to lead the Company at the completion of his term,” stated Disney in this announcement. Investors clearly don’t regard this as a Mickey Mouse move, as Disney’s share price is up by 6.8% to $98.16 in Monday trading.

The Federal Communications Commission (FCC) has, as recently promised, released a “pre-production draft” of its new National Broadband Map. The map will display specific location-level information about broadband services available throughout the country, marking “a significant step forward from the census block-level data previously collected… an accurate map is an important resource for targeting funding and other efforts to bring broadband to unserved and underserved communities,” noted the FCC in its announcement. The publication of the draft is “an important milestone in our effort to help everyone, everywhere get specific information about what broadband options are available for their homes, and pinpointing places in the country where communities do not have the service they need,” stated FCC chairwoman, Jessica Rosenworcel. “Our pre-production draft maps are a first step in a long-term effort to continuously improve our data as consumers, providers and others share information with us. By painting a more accurate picture of where broadband is and is not, local, state, and federal partners can better work together to ensure no one is left on the wrong side of the digital divide.” While the FCC did not mention what this will mean for federal funding timelines, it’s hoped that the National Telecommunications and Information Administration (NTIA) will soon announce state allocations from the US$42.5bn Broadband Equity, Access, and Deployment (BEAD) Program. The NTIA is legally bound to use the new FFC maps to distribute BEAD money based on the number of unserved locations in each state and, understandably, it hasn’t been happy up to now about doling out the cash based on what was clearly questionable data.

Following an agreement with the Council of the European Union and the European Parliament, the European Commission is to go ahead with its plan to build a third strategic satellite constellation to add to the existing Galileo and Copernicus networks. The network, called Iris (Infrastructure for Resilience, Interconnection & Security by Satellites), will be part funded with €2.4bn of European Union cash, though the total cost of building the network is expected to be about €6bn. Iris will be a “sovereign constellation, which imposes strict eligibility criteria and security requirements… focused on government services, including defence applications” and will provide “connectivity to the whole of Europe, including areas that do not currently benefit from broadband internet, as well as to the whole of Africa, using the constellation's north-south orbits.” For more on what this brings, check out this article from February.

Truly high-speed broadband availability continues to improve in the UK. According to the research team at Point Topic, fibre-to-the-premises (FTTP) infrastructure passed 41% of all premises at the end of October, up from 38% two months earlier, while 1Gbit/s broadband connections via fibre or DOCSIS-enabled cable connections were available to 71% of all premises, which is encouraging for British consumers and businesses. Read more.

The Dutch government has approved its Digital Economy strategy, which includes access to 1Gbit/s broadband connectivity for every resident and business in the Netherlands by 2030, including the 19,000 homes that are in hard-to-reach rural areas. If the target seems unachievable as 2030 approaches, the government has decided it will either provide state aid for network rollout in certain areas or legislate for network operators to extend their reach, according to TelecomTalk.

Verizon has launched Verizon Test Drive, which lets US consumers with unlocked smartphones try its 4G and 5G service, including up to 100 Gbytes of data, free of charge for 30 days via an embedded SIM (eSIM). As is usual in the marketing messages of the main US operators, the announcement of the offer includes a dig at Verizon’s main rivals. “The phone you are test driving on must be carrier unlocked. Unlike Verizon, other carriers don’t make this process easy. If you are a T-Mobile customer, you must pay off all your outstanding device payments, and they may request proof of purchase or additional information to unlock it. For AT&T, you need to call customer support and ask them to liberate your phone. Verizon Test Drive will check your phone and let you know if it is unlocked.” That may be the case, but the timing of this offer is interesting: eSIM capabilities have been embedded in many smartphones for years, so why promote this offer now? Could it have anything to do with T-Mobile US’s offer in early September of a free trial of its services via eSIM? And Apple’s decision, also in early September, to do away with physical SIM card support for new iPhone 14 devices sold in the US market? The timing doesn’t appear to be coincidental. AT&T’s eSIM efforts have so far been limited to a 14-day free trial of services, via pre-paid mobile operator Cricket (which is owned by AT&T), which was announced at the start of November.