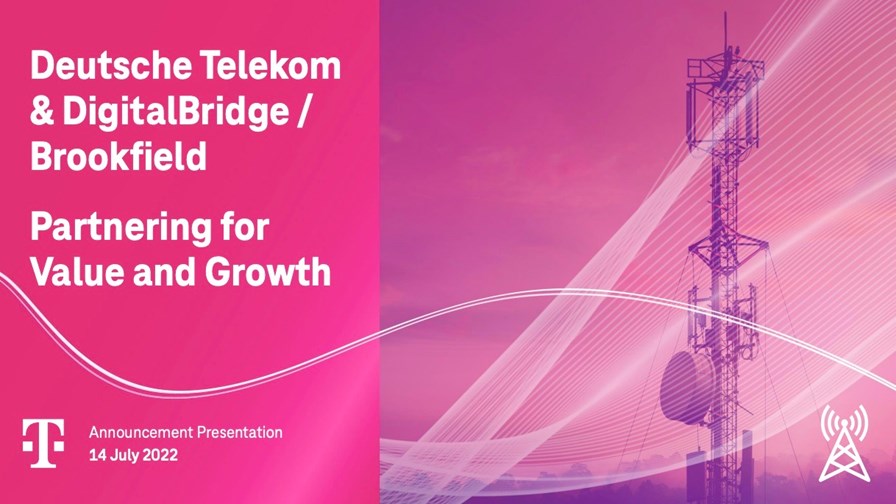 Deutsche Telekom has concluded its lengthy towers unit sale process by agreeing to sell a 51% stake in GD Towers, the business unit that comprises its tower assets in Germany and Austria, to infrastructure investors DigitalBridge and Brookfield, both of which have significant experience and current international assets in the towers sector. The deal values GD Towers at €17.5bn including debt.

The agreement creates a powerful tower asset company with more than 40,000 towers and sites (33,000+ in Germany and 7,000+ in Austria), which can be offered to multiple users who can co-locate their radio access network assets on those sites. The unit has about 800 staff and ran a business with pro forma revenues of around €1.1bn in 2021. Naturally, Deutsche Telekom is remaining as the anchor tenant at the existing sites with “favourable long-term (around 30 years) lease agreements.”

The German operator had always stated that it wanted to retain a significant level of control over GD Towers – which was carved out as a separate unit within the DT group 20 years ago – in any deal it struck, and it certainly seems to have managed that with this agreement, which is set to close by the end of this calendar year.

The current GD Towers management team of Bruno Jacobfeuerborn (CEO) and Thomas Ried (CFO) will continue running the business for at least three years after the deal has closed and Deutsche Telekom can appoint two of the five board seats of the new towers company formed by the deal, with the “joint governance structure” of the board ensuring that DT “is actively involved in material board decisions,” the operator noted in a presentation about the agreement.

It has also received a commitment from DigitalBridge and Brookfield to build 5,400 new sites by 2026 and engage in a “comprehensive network modernisation programme”. In addition, DT has negotiated “golden site protections” for about 4,000 sites that will have restricted colocation opportunities. Deutsche Telekom also has buyback rights that give it the option to “regain control and reconsolidate GD Towers in the future” if it feels the move has not worked out as planned. Further details about the deal can be found in this official announcement.

Deutsche Telekom will record proceeds of €10.7bn from the deal, of which €4.1bn comes from offloading debt as part of the sale, while €6.6bn comes from the sale of the 51% stake. The German operator says the proceeds will help it to reduce its group debt levels and “accelerate the path towards its targeted 50.1% share capital interest in T-Mobile US,” up from the 48.4% it currently holds.

“This appears to be a good outcome for Deutsche Telekom,” says Kester Mann, technology analyst and director of consumer and connectivity at CCS Insight. “On the one hand, the sale proceeds will make a dent into its massive debt pile of over €130bn and smooth the path to securing control of the group’s star-performing unit, T-Mobile US. On the other, Deutsche Telekom still retains a tight hold on an asset it sees as strategically important, meaning it retains influence on important decisions, such as when and where mobile towers should be deployed.”

With this deal concluded, “attention now turns to what’s next for other European towers units, such as Orange’s Totem and specialists like Cellnex, which was understood to be among the front runners for GD Towers until very recently. With the industry keen to capitalise on continued high levels of investor interest in passive infrastructure, further deals are likely just around the corner,” adds Mann.

Indeed, Cellnex will need to go back to the drawing board to figure out how it gains a foothold in the German market, the only major country in Europe where it doesn’t have a towers and cell site presence.

It also raises questions about what KKR might do next: The private equity giant had gathered a consortium of finance firms to bid for GD Towers and, until early this week, was regarded by sources close to negotiations as the favourite to strike a deal with Deutsche Telekom.