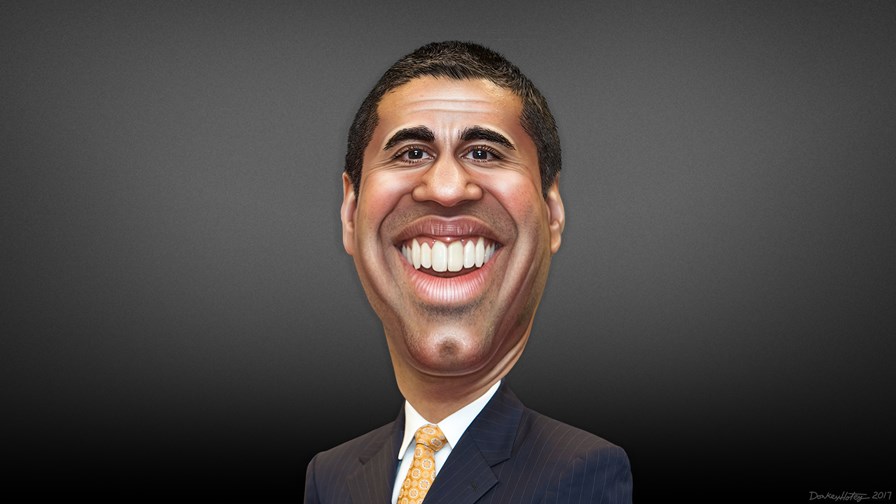 On Monday TelecomTV reported on the the intemperate and brazenly partizan comments made by Ajit Pai in reference to moves by members of the State Legislature of California to introduce their own net neutrality regulations to reinstate what they describe as "fair and open access to the Internet." (see "FCC Chairman: "We have met the enemy and it is free data"). Agitated Ajit, told his Maine-ly right-wing think-tank audience that California's proposed legislation is both "illegal" and "anti-consumer", and a blatant attempt by a "nanny-state" to "destroy consumer rights".

Two Senators, Scott Wiener, a San Francisco Democrat and Kevin de León, a Los Angeles Democrat, are working together to, as Scott Weiner puts it, "protect open Internet access, the free flow of information, and innovation" in California. However, Mr. Pai regards their efforts as "micromanagement" and an attempt to "seek greater government control of the Internet" (which is remarkable mental gymnastics given that the majority of the FCC board are Republican appointees who kowtow to the party line of the Trump administration), and calls the California proposals "an egregious example of radical, anti-consumer internet regulation" that "poses a risk to the rest of the country."

Having been strimmed by the weed-whacker-in-chief, Scott Weiner has responded to Pai's criticisms by, in the first instance, accusing the FCC Chairman of  "crony capitalism" and of having "abdicated his responsibility." He added, ""Unlike Pai’s FCC, California isn’t run by the big telecom and cable companies. Pai can take whatever potshots at California he wants. The reality is that California is the world’s innovation capital, and unlike the crony capitalism promoted by the Trump Administration, California understands exactly what it takes to foster an open innovation economy with a level playing field."

California Senate Bills 822 and 460, which, it is expected, will be signed into law by State Governor Jerry Brown at the end of this month, will institute the strongest net neutrality protections in the entire US and Ajit Pai has got a big burr under his saddle about it.

Scott Weiner says, "SB822 is necessary and legal because Chairman Pai abdicated his responsibility to ensure an open Internet. Since the FCC says it no longer has any authority to protect an open Internet, it’s also the case that the FCC lacks the legal power to preempt states from protecting their resident and economy."

Here, Weiner is referring to the fact that, in essence, the US regulator has abdicated all requirement and responsibility as an intermediator to protect consumers from rapacious ISPs and telcos in regard to broadband Internet access and the throttling of traffic and has passed the buck on that one over to the US Federal Trade Commission (FTC).

"Burp!" As Mr. Pai is finding out, it's hard to eat an entire elephant

Even before he was appointed Chairman of the FCC by Donald Trump, Ajit Pai was busy burnishing his business-friendly anti-regulation credentials. He said, "We need to fire up the weed whacker and remove those rules that are holding back investment, innovation, and job creation." And if that isn't clear enough evidence of his ideological determination to dismantle the Obama-era net neutrality regulations, there was a further clue in the title of his policy initiative, the "Restoring Internet Freedom Order". Straight out of the "How to be a Tinpot Despot" that one.

Once he became Chairman of the FCC, Ajit Pai duly took up cudgels and tried to bash the living daylights out of net neutrality but, as others in the past have learned, the only way to eat an elephant is to do it a bit at a time. Adit Pai's eyes though are bigger than his belly and he attempted to consume the entire mammoth of years of net neutrality regulations, tusks, trunk, toenails and all, at one sitting.

It was a capital mistake to do so rather than pick specific grounds on which to fight and win a series of small but cumulatively important battles that would have helped his overall campaign over time. But no, he's a weed-whacker in a hurry and now he's surprised and angry as more and more states (29 so far and counting) line up to to fight back and introduce their own net neutrality regulations to reinstate what they describe as "fair and open access to the Internet."

Scott Weiner says he fully expects that California's initiative will be challenged in the courts over the contention that federal rights take precedence over states rights as far as broadband is concerned and so is getting his retaliation in early, practicing his rebuttals and emphasising that California's proposals based around "a broad coalition of consumer groups, groups advocating for low income people, small and mid-size technology companies, labour unions and President Obama's FCC chairman, Tom Wheeler."

Meanwhile, Senator Kevin de León says, "When Washington, D.C. abandons its obligation to protect American consumers from predatory special interests, California must step up and do D.C.’s job. Net neutrality is critical to safeguarding the integrity of our democracy, which is why we are committed to making sure that every single Californian has equal access to the information and resources on the Internet."

Finally, it might behove us to remember that ISPs sell Internet services, not the Internet itself.

The clue is in the fact that they are called Internet Services Providers. It means they are selling Internet access and a Californian ISP sells Internet access services that are applied across and completely within the State of California itself and nowhere else. However, when the subscribers to an ISPs services access the Internet, he or she can wander off to browse and download data from anywhere they like.

It's not for the ISPs to circumscribe where their customers go once they are online. Basically, the FCC is being hoist by its own petard. The regulator admits and agrees that ISPs are not selling telecoms but access to a public network and California's net neutrality proposals are designed to ensure that ISPs must treat all data equally. As the judge told the bigamist, "You can't have your Kate and Edith".

The battle lines are drawn and we can be sure that this is going to be a long war or attrition. Back in August 1914 the British firmly believed their little spat with the German Kaiser would be done and dusted by Christmas. It wasn't.​