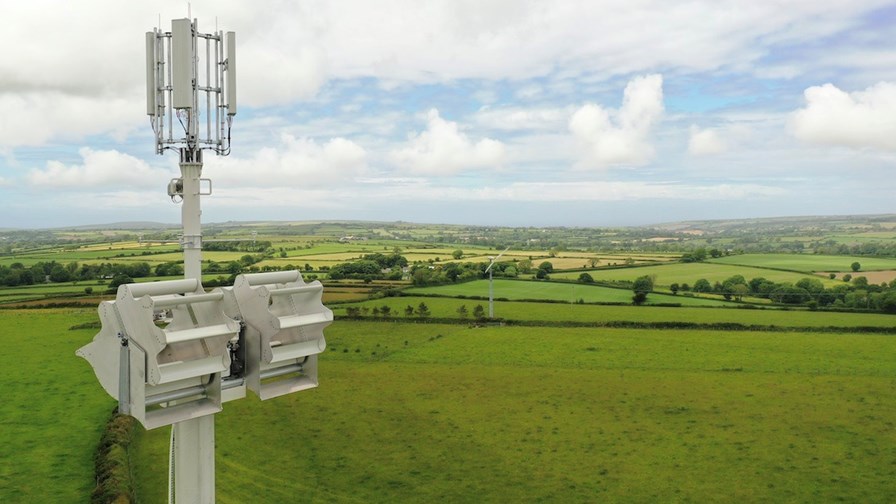 In today’s industry news roundup: Vodafone UK’s deployment of a wind- and solar-powered mobile mast; a private wireless network launch from Google Cloud; and some encouraging predictions for the 5G services sector from a respected industry analyst house.

Vodafone UK has deployed a mobile network mast that can be entirely powered by a combination of wind power, solar power and on-site battery storage, to provide commercial communications services to the village of Eglwyswrw in Pembrokeshire, Wales. The mast incorporates wind turbine technology developed by Crossflow Energy and is connected to solar panels and battery storage units. The mast is on trial for two years, during which Vodafone will gather data that will help it to “optimise the technology and determine which sites are most suitable for ‘self-powering’ masts”. The deployment follows tests of the technology that started in late-2021 – you can read all about the supporting technology and the potential benefits of such deployments in this article published by TelecomTV in November last year. Andrea Dona, chief network officer and development director at Vodafone UK, stated: “Connectivity is vital to everyone, no matter where you live. This self-powering mobile phone mast, with on-site battery storage, could help us connect places that were previously impossible to reach. It will also help us reduce carbon emissions and minimise our impact on local environments. If this trial is a success, we would like to roll out more ‘self-powering’ masts, with a focus on areas with poor or no coverage.”

Google Cloud has unveiled a private wireless networking solutions portfolio aimed at all enterprises. The new suite is based on Google Distributed Cloud Edge and uses Google’s independent software vendor (ISV) ecosystem. According to the tech giant, this offering solves the “distinct performance, service-level, and economic needs” of key industry verticals by mingling dedicated network capabilities with full edge-computing application stacks. Google suggested the ecosystem allows for rapid adoption of “turn-key, private network solutions with the flexibility to deploy management, control and user plane functions both in the cloud and at the edge”. It also touts the service as being backed by Google’s security best practices and able to scale to new use cases requiring “low latency and quality of service (QoS) for critical applications”. For the launch, Google has partnered with numerous ecosystem players, including Betacom, Boingo Wireless, Celona, Crown Castle and Kajeet. Google’s entry into the private networks space pits it against the likes of Ericsson, Nokia, Microsoft, Amazon Web Services and Verizon.

Global 5G connections are set for “a strong pace of growth” in 2022, according to the latest market forecast by analyst CCS Insight. It noted “a clearer path to adoption” of the technology following a disrupted start due to the Covid-19 pandemic two years ago, and boosted by the fact that 5G has evolved from a nascent to a fledgling technology. Contributing factors for the uptake include the broad availability of 5G-capable smartphones, “refined operator strategies and delayed network launches [that are] starting to take place”. It is expected that devices such as smartphones, tablets and laptops will account for 99% of 5G connections worldwide by the end of the year. “The world still faces a bleak macroeconomic and geopolitical outlook in 2022, coupled with supply chain difficulties. But the transition of mobile subscribers to 5G networks is set to make good progress, with 5G connections forecast to nearly double this year to 1.2 billion,” said James Manning Smith, senior analyst at CCS Insight. Fixed wireless access, machine-to-machine and cellular internet of things applications are also set to experience growth in 2022. Find out more.

Test and analytics system specialist Exfo has teamed up with Intel to develop an assurance system that, the partners claim, can automatically detect and identify network problems whether they occur in the cloud, network or service layers of a telco’s infrastructure. Exfo says its full-stack assurance solution combines the attributes of its adaptive service assurance (ASA) system with analytics built into Intel’s processors. “The solution enables operators to assess the operational state of the underpinning cloud-native infrastructure from the chip-level up, allowing faults to be isolated or correlated across all network domains. Together, the Exfo and Intel technology speeds up the time to resolution and eliminates domain-specific fault denial,” noted the Canadian test vendor in this press release.

The government of India has reportedly announced it will hold a 5G spectrum auction by the end of July. According to local media, companies will be able to bid for a total of 72GHz of spectrum. Up for grabs are 20-year contracts comprising various low-, mid- and high-frequency bands. The nation’s authorities will also reserve spectrum specifically for the development of private networks that are tipped to aid acceleration of innovation across Industry 4.0 applications, including machine-to-machine (M2M) communications, internet of things (IoT) and artificial intelligence (AI). Rollouts of the next-generation network technology are expected soon, according to the reports.

SoftBank looks set to list some of its stake in UK-based chip designer Arm on the London Stock Exchange, in what looks like a reversal of the decision to only list Arm stock in New York, Bloomberg has reported. SoftBank decided on a partial IPO of Arm stock after the Japanese giant failed to sell the British chip specialist to Nvidia in a $40bn deal that was announced in September 2020 but collapsed earlier this year. Now SoftBank, which initially acquired Arm in 2016 for some $32bn, appears to have been persuaded by UK financiers and politicians that having a dual-listing in New York and London would be the most appropriate way forward for a Cambridge, UK-based operation.

Qualcomm has overturned a €997m ($1.05bn) fine from European Union (EU) antitrust regulators, by winning a court case that accused the US chipmaker of anticompetitive practice in the form of paying Apple to exclusively use its chips on its devices, Reuters reported. According to a decision by the European Commission in 2018, the practice covered the period between 2011 and 2016, in which Qualcomm was paying billions of dollars to have its chips used in all of Apple’s iPhone and iPad products. Now, the General Court has reportedly revoked the EU findings. According to judges cited by Reuters, procedural irregularities have negated the commission’s analysis of the alleged conduct by Qualcomm. The EU can appeal to the highest court, the Court of Justice of the European Union.