Gearing up for a flagship-filled holiday quarter, smartphone shipments grew 2.7% year-over-year in the third quarter, according to IDC

FRAMINGHAM, Mass. November 2, 2017 – According to preliminary results from the International Data Corporation (IDC) Worldwide Quarterly Mobile Phone Tracker, smartphone OEMs shipped a total of 373.1 million smartphones worldwide in the third quarter of 2017 (3Q17). Third quarter volumes were up 2.7% year over year, and up 7.4% from the second quarter. Despite the annual growth being low, the fact that it is positive leading into the holiday quarter is a sign the industry still has momentum.

During the lead-in quarter to the holiday season all of the top 5 vendors experienced positive year-over-year growth, with Xiaomi growing the strongest by more than doubling its sales from this quarter a year ago. When all was said and done, the top 5 ranking did not change from the second quarter. Asia/Pacific, excluding China and Japan, performed the best by far. This market grew double digits, likely as a result of the continued slowdown in the China domestic market, which was close to flat year over year in 3Q17.

"As much of the focus has been on the wide range of high-profile flagship smartphones launched or announced in Q3, it is also important to look at what is happening with the rest of the industry," said Ryan Reith, program vice president with IDC's Worldwide Quarterly Mobile Device Trackers. "Collectively, the industry continues to grow, but at a much slower pace than past years. What is clear is that the 'Others' outside of the top 5 leading vendors continue to struggle and the industry leaders are quickly forming two camps. First, those able to drive significant volumes at the high end, which right now is basically Samsung, Apple, and Huawei, despite high-profile launches from Google, Essential, LG, and others. Second, a few other Chinese OEMs that are making tremendous headway outside of the China domestic market."

"With an overabundance of high-end flagships launching in the coming weeks, the fourth quarter will be extremely competitive as vendors will fight it out to win over holiday shoppers," said Anthony Scarsella, research manager with IDC's Worldwide Quarterly Mobile Phone Tracker. "Although these premium flagships will capture all the hype while driving up the average selling price in the quarter, we still believe a clear majority of shipments will come from more affordable models across many markets. IDC previously forecast the fourth quarter to grow at less than 1% year over year as initial supply constraints surrounding the iPhone X and higher than normal prices on many flagships could lead to consumers playing the waiting game until prices come down after the holidays or opt for a more affordable device."

Samsung once again remained the overall leader in the worldwide smartphone market with 83.3 million units shipped, up 9.5% from last year. Samsung's flagship devices continued to perform well in the quarter as the Korean giant introduced the new 6.3-inch Note8. Samsung's latest device has witnessed robust initial demand and looks to have officially put last year's Note 7 fiasco to rest. Despite the success of the three major flagship models (S8, S8+, and Note8) in the quarter, Samsung reported that overall revenue decreased within the mobile division quarter-on-quarter. The decrease was caused by a higher blend of more affordable models in the product mix as entry-level, and mid-range devices from the J-Series and A-series continued to drive most of the shipments in both emerging and developed markets.

Apple's newest iPhones helped drive third-quarter shipments of 46.7 million units, up 2.6% from the 45.5 million units last year. For the first time in its history, Apple launched three new devices at their fall event, as the new iPhone X joined the iPhone 8 and 8 Plus in the Apple line up. With the newly designed X just launching this quarter, demand for the new iPhone 8 and 8 Plus models was timid compared to previous launches. Despite all this, the new 8 and 8 Plus brought wireless charging to the iPhone for the first time and a glass back that we have not seen since the iPhone 4S. Apple has also improved the camera, increased the memory, and added a new faster processor via the new A11 Bionic chip. Older iPhones such as the SE, 6S, and 7 all received price cuts late in the quarter which will balance the iPhone portfolio across all price tiers for the holiday quarter. The fourth quarter from Apple could be the first quarter with something for everyone as the new X will lead at the high-end and as older discounted models will offer something for everyone in between.

Huawei continues to gain momentum in the market as the Chinese giant shipped 39.1 million units, climbing a healthy 16.1% from last year. The current Mate 9 and P10 flagship models continued to drive volume at the high end while Huawei's Honor brand also found success with the more affordable 6X and mid-tier Honor 8. Much like Apple, all eyes will be on the new devices that launch next month. The new Mate 10, Mate 10 Pro, and Porsche Design Mate 10 will bring premium bezel-less designs to the market along with built-in artificial intelligence from its new chip, the HiSilicon Kirin 970. These new models will challenge both Apple and Samsung at the top of the market regarding premium flagship offerings as well as in the race for overall worldwide market dominance.

OPPO grew shipments 19% year over year in 3Q17 with 30.7 million smartphones shipped in the quarter. The company remained the number 4 ranked smartphone vendor worldwide and its continued expansion outside of mainland China continues to be a success. Its widely seen marketing has proven effective, supported by its full suite of devices offered across low, mid, and (relatively) high-end. OPPO launched a couple of new models in India during the quarter, which is a market it continues to focus heavily on. It also started participating in the online festival sales along with expanding its exclusive stores. For China, the R11 (including the R11 Plus) was its most popular model that helped it to gain momentum in its home market.

Xiaomi remained in the number 5 ranking among worldwide smartphone vendors, but overall it had the strongest year-over-year growth. The company more than doubled its shipments from 13.6 million in 3Q16 to 27.6 million in 3Q17. The biggest catalyst for growth was success in the India market, heavily supported by mega online festival sales during the month of September. Discounts on most of the models along with the aggressive bank offers and easy financing options made Xiaomi's top models attractive for online purchase. In addition to its online growth, its continued expansion of its preferred partner program and MI store buildout helped Xiaomi to further cement its position in the offline space. 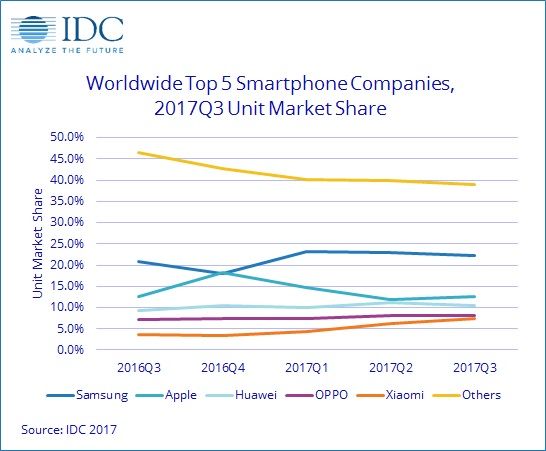