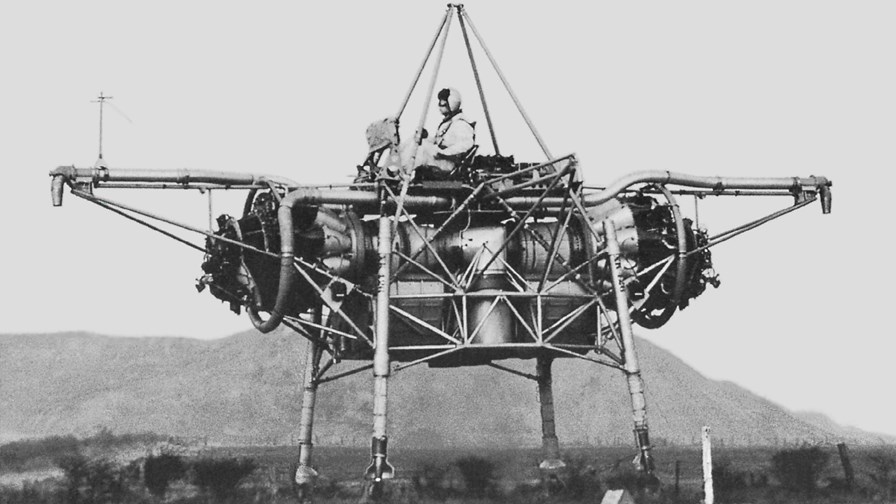 Back in early 1950's Britain, the Rolls-Royce Thrust-Measuring Rig or "Flying Bedstead" as it was affectionately and more commonly called, was used to experiment with VTOL (vertical takeoff-and-landing) technologies. This work eventually resulted in the development and deployment of the world famous amd world-beating Hawker Siddeley Harrier "Jump Jet", a hugely successful military aircraft that could operate from "improvised bases" such as clearings in jungles and dense forest as well as car parks and the tops of shipping containers.

Last night the BT Tower in central London played host to the launch of UK5G, a new industry body tasked with the responsibility of supporting the development of the UK as a global leader in the development and uptake of 5G. It is fully expected that the new testbed, endorsed by the British government via the aegis of the Department of Digital, Culture, Media and Sport (DCMS) will quickly develop world-leading 5G technologies, services and applications as innovative and revolutionary as the remarkable aircraft that were built on the results of the pioneering studies of the Flying Bedstead of yore.

The UK innovation network brings together a wide range of organisations from across the 5G eco-system. Members include representatives from the UK's world-leading research bodies and laboratories, technology providers, the investment community, regulators and, interestingly and crucially, vertical industry partners, some of which may not, as yet, be fully aware of the benefits that next-generation wireless connectivity will confer on their sectors.

UK5G's remit is to "build and nurture" a community that brings together industry, researchers and research organisations, the public sector, entrepreneurs, innovators and end users with the intent to speed Britain's development and deployment of 5G. Central to the initiative is the ability and determination of participating organisations to share knowledge about emerging 5G research and development and to learn from lessons learned. The innovation network will also enable and facilitate introductions and collaborations between technologists, potential new entrants and major industrial adopters and identify key developments, opportunities, challenges and barriers to 5G adoption.

Other responsibilities are to provide an immediately available and fully up-to-date information source for the industry and to be the locus for research, technology and industry collaboration. Furthermore, UK5G will also be a focus whereby overseas businesses can gain a detailed understanding of the advantages inherent in investing in the UK and its 5G test-bed network.

What's more, in partnership with the British Government, UK5G will support both inward and outward investment opportunities and promote knowledge building and sharing through working groups and member's events.

As part of the launch UK5G also announced the membership of its 25 member-strong Advisory Board, the job of which will be to provide advice, guidance and support for the aims and goals of the innovation network as well as providing impartial, industry-focused advice to DCMS on its future plans for 5G.

Tally Ho! The sky's the limit!

The project began with the building of a unique pilot network deployed by scientists at King’s College London, the University of Surrey and the University of Bristol. It is backed by £16 million of funding from the UK government. Speaking at last night's launch, Ian Smith, the 5G Testbeds and Trials Programme Director of the DCMS said, "The Government is fully supportive of enabling UK world leadership in the development of 5G and our commitment toUK5G, along with significant public funding, demonstrates this. I'm delighted to endorse UK5G's very impressive Advisory Board membership and look forward to working closely with it as we develop our plans."

Bob Driver, the CEO of Cambridge Wireless and a lead UK5G partner told TelecomTV, "This is an interesting juncture in 5G. Essentially the first through to the fourth generations of mobile technology were evolutionary iterations that followed a repeatable recipe and pattern. 5G is nothing like that. It is completely different. It is revolutionary and the UK 5G community brings the entire eco-system together in coherent and purposeful collaboration and to ensure that innovation flows between various projects. That will only accelerate as the UK develops and deploys 5G in commercial networks. Acting independently of the Government, but with its support, UK5G and its partners are fundamental facets of the UK's 5G vision and are helping to position the UK as a world leader in next generation networks."

By the bye, and talking of mid-20th Century technology, what used to be called the Post Office Tower back when it was opened in 1965 in the time of state-owned telecommunications networks and services and during the period of Prime Minister Harold's Wilson's evangelical enthusiasm for "the white heat of the technological revolution" loomed impressively over a low-rise central London.

The highest building in the city could be seen from just about anywhere in the city, and from some aspects and angles it still can, despite the skyscraper developments that have transformed much of the metropolitan skyline since - and continue to do so. The Post Office Tower (later renamed BT Tower) couldn't be missed "in the flesh" as it were, but you'd look for it in vain on a map. That's because until the 1990's the location of the tower remained an official state secret and was deemed not to exist. It does though, and it did then, and everybody knew where it was - including, presumably various agents of the Soviet Union.

The Future Home in the 5G Era: Winning strategies for CSPs

Cellnex ends Q1 2021 with more than 40% growth in revenue, EBITDA and cash flow