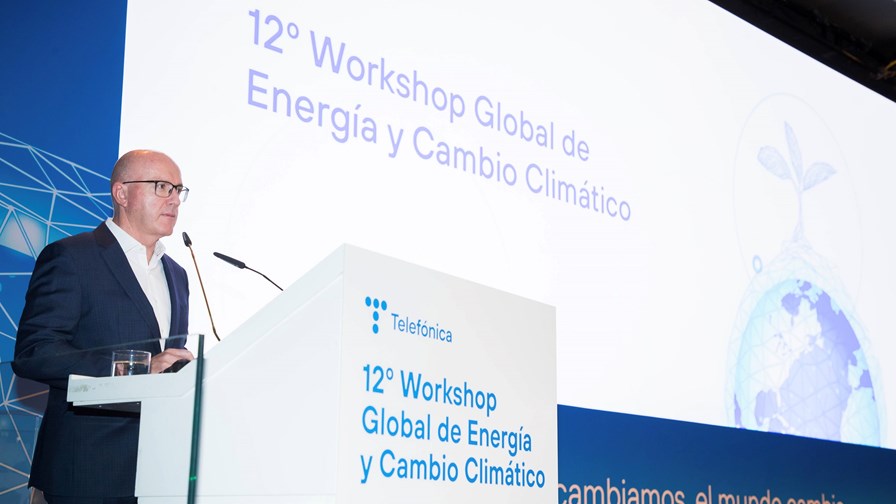 In today’s news roundup, Telefónica gets green and lean, BT looks at the big picture, Airspan gets an important stamp of approval and TIP starts the search for a new Executive Director.

Telefónica is pushing its sustainability credentials hard with plans to ramp its ESG (Environmental, Social and Governance) funding to more than €10 billion in the next few years in an effort to “continue supporting projects with environmental and social impact,” the operator’s Chief Operating Officer, Ángel Vilá (pictured above), told the 12th Global Workshop on Energy and Climate Change this week. You can read more about what Telefónica is doing in this press release. That kind of pledge will no doubt win the operator some plaudits, but it will need to do a lot to win around the UGT union, which has revealed that more than 3,000 staff that have been with the Spanish giant more than 15 years and who are aged over 55 are set to be offered voluntary redundancy as part of Telefónica’s cost-cutting drive, reports Reuters.

Speaking of warm and fuzzy strategies... BT has published a new “manifesto” that sets out how it can be commercially successful while also being “responsible, inclusive, and sustainable.”  According to CEO Philip Jansen, who currently has one eye on his M&A inbox, “The BT Group Manifesto is about using our scale and technology to enact real change that the world desperately needs while simultaneously growing our business by staying true to our purpose: we connect for good. Crucially, this is not just a sustainability plan, it’s an agenda for growth and commercial success that recognises that we will only succeed if we help solve some of the problems faced by the societies and customers we serve.This will be achieved through the creation of products and services that directly address those problems and by doing it in a responsible, inclusive and sustainable way. For BT Group, this isn’t just good, it’s fundamental to our growth path,” concluded Jansen. Read more.

The AirStrand 2200 from Airspan Networks, which has been developed using the Qualcomm FSM100 5G RAN Platform, is the first Citizens Broadband Radio Service (CBRS) 5G standalone small cell radio approved by the FCC for use on US networks. Airspan is one of a number of companies hoping to secure long-lasting supplier relationships with companies that plan to use CBRS spectrum for private network rollouts: Dell’Oro expects $2 billion of investments in this niche sector during the 2020-2025 period. AIrspan, now a listed company, recently reported third quarter revenues of $38.9 million, up 8% year-on-year, though it also posted a $30.4 million operating loss for the quarter due to high costs associated with its recent merger with special purpose acquisition company (Spac), New Beginnings Acquisition Corp. The company’s stock currently trades at $5.19.

The Telecom Infra Project (TIP) is on the hunt for a new Executive Director after announcing that Attilio Zani had departed the industry group to “pursue other opportunities.” TIP Chairman Yago Tenorio noted: “On behalf of the Board of Directors and the wider community, I would like to thank Attilio for his commitment to the telecommunications industry and his leadership in TIP and its mission. Attilio has been a strong advocate for the value of disaggregation of telecoms solutions not only within the industry and broader ecosystem but also to government officials and regulators across the world. He leaves TIP as a stronger, more expansive organization than the one he joined three years ago. We wish him every success in his future endeavors.” Meanwhile, TIP had appointed Rocky Bullock, former CEO of Open Compute Project (OCP), as its Director of Operations to “further drive TIP’s growth.” Read more.

The European Parliament and EU Member States have reached a political agreement on a European Data Governance Act, paving the way for final approval of the legal text by the European Parliament and the Council. “With the Data Governance Act agreed today, we are defining a common approach to data sharing – the European way,” blustered Commissioner for Internal Market Thierry Breton, who many will remember as a former CEO of France Telecom (now Orange). “We are facilitating the flow of growing industrial data across sectors and Member States to help Europe become the world's number one data continent. We are doing so by building trust, putting the individuals and companies who generate data in the driving seat so they remain in control of the data they create. In a nutshell: an open yet sovereign European Single Market for data.” Read more.

NEC says it has developed a "gradual deep learning-based object detection technology" that enables “efficient and high throughput object detection for video analytics while maintaining detection accuracy.” According to the Japanese vendor, the technology “enables up to eight times the processing speed of object detection for large volumes of images, even on edge devices with limited processing capacity.” This sounds like an important development for smart city and smart factory applications. Read more.

Bouygues Telecom is the first French operator to provide all IoT cellular technologies following the launch of an NB-IoT network by its IoT subsidiary Objenious. See this translation of its announcement for further details.