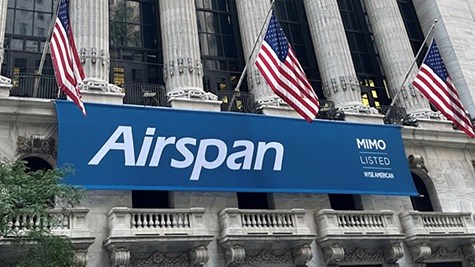 Alternative radio access network (RAN) systems vendor Airspan Networks, which has just become a publicly-traded company for the second time, has continued its dramatic sales growth trajectory, reporting a 59% year-on-year increase in revenues for the first half of 2021 to $88.0 million.

Airspan reported second quarter sales of $42 million, up by 51% compared with the same period a year earlier, though that also represented a near 9% sequential dip from the $46 million recorded during the first quarter.

Combined, though, the sales during the first six months represent a major leap from the first half of 2020, with 5G, Open RAN and FWA (fixed wireless access) all cited by the vendor as growth drivers.

But it’s clear the company’s new investors are concerned by what they’re seeing currently. Airspan recently completed its plan to become a listed company (for the second time) via a merger with special purpose acquisition company (Spac), New Beginnings Acquisition Corp., and its shares began trading on the NYSE American exchange on 16 August, since when the stock has dipped from $10.09 to $7.60.

So the Airspan team has some work to do, especially if the company is to hit the full year sales target of $254 million that was shared with potential investors earlier this year. (See Open RAN vendor Airspan preps second public listing.)

In addition, the company is still running at a loss – its adjusted EBITDA for the first half of the year was $10.7 million, though this isn’t unusual for a company that is investing now in new product development and customer engagements facilities with the hope of reaping the rewards later. (See Airspan joins the UK Open RAN lab club.)

President and CEO Eric Stonestrom is, as you’d expect, bullish: “Our strong pre-combination second quarter 2021 results, when taken together with our first quarter performance, demonstrate we have excellent momentum as we continue to execute our growth strategy,” he noted in the company’s financial update. “We generated strong revenue from existing customers, expanded revenue from Fixed Wireless Access (FWA) and continued to diversify our customer base. We launched new 5G products filling out our solutions portfolio as we pursue the growing 5G addressable market.”

More detailed information on Airspan’s performance during the first half of the year is limited, but further insights will come when the company has to report its financial progress once the third quarter’s business is completed.

But the company, which has a rich history in wireless networking technology development, is well placed to cement a position as an alternative to the RAN majors and already is a key technology supplier to the likes of Reliance Jio, Rakuten Mobile, SoftBank and Turkcell. The test now is to see if it can find its way into the 5G expansion and Open RAN plans of other major operators and capitalize on the investments set to be made by those companies with CBRS spectrum licenses in the US.