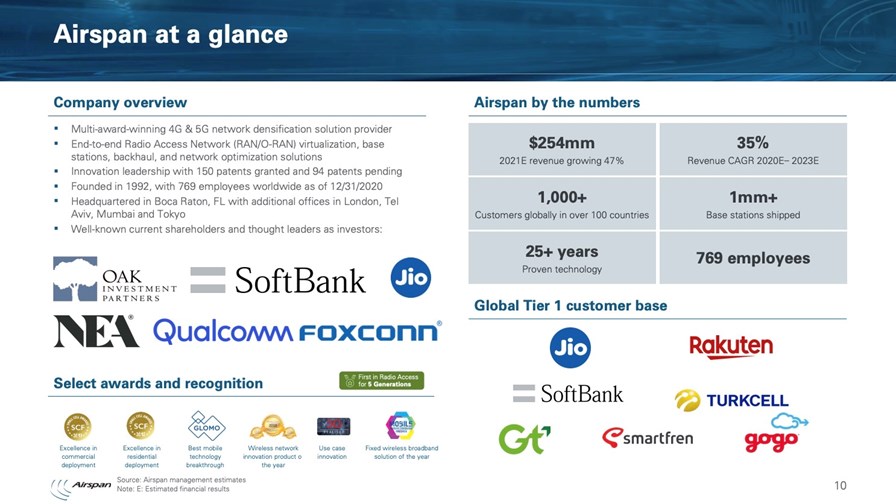 Already bitten hard by a previous public listing, Open RAN systems vendor Airpsan is listing its stock once again as its market opportunity expands and its sales ramp.

This time, though, it’s not going for a traditional IPO process: Instead it is merging with a special purpose acquisition company (Spac), New Beginnings Acquisition Corp., which is already listed on the New York Stock Exchange (NYSE). Following the merger, Airspan will be listed under the ticker symbol MIMO (cute move).

There are lots of details in the official statement about the move, which you can read in full here, but it’s worth noting that the move is expected to raise $166 million in net proceeds for the company to help execute its “growth plan,” and that SoftBank and Dish Network are among the companies already committed to buying some of the stock. Airspan expects to be valued at $822 million once the merger is completed.

Airspan was previously a listed company at the beginning of the century, but was focused on a WiMax market that ended up in a technology cul-de-sac and, with annual revenues of less than $80 million, delisted in 2009.

Now, though, the company is not only in the hot 5G radio access network equipment market, but it’s an already-established supplier of Open RAN technology (as well as other radio access network products), boasts marquee operators such as Reliance Jio, Rakuten Mobile, SoftBank and Turkcell among its 1,000-plus roster of customers. It’s expecting its annual revenues to grow by 47% this year to $254 million, and then to continue climbing to more than $420 million in 2023. This year it anticipates earnings before interest, tax, depreciation and amortization (EBITDA) of $21 million, rising to $106 million in 2023.

Airspan’s management is confident that its established position and the trends towards disaggregation, virtualization and wireless network densification will lead to additional market traction, particularly with companies that landed C-band spectrum in the recent US auction. It’s also positioning itself as a 4G/5G network infrastructure alternative to “Chinese & European OEMs,” so is pushing hard with the “local supplier” angle for US operators and private wireless network builders.

That Airspan has chosen the Spac route to raise capital is interesting, given there are plenty of alternatives currently. For more on the role of SPACs, see the short analysis in this TelecomTV article from 8 March.

The next question is – will other Open RAN players decide the time is right to list, be acquired or raise new capital? Might Mavenir re-ignite the IPO plans it so dramatically canned late last year?