“In everything we do, people come first,” said Jeff Williams, Apple’s chief operating officer. “We are constantly raising the bar for ourselves and our suppliers because we are committed to the people who make our products possible as well as the planet we all share. This year, we’re proud to give more people an opportunity to advance their education. Working alongside our suppliers, we’re challenging ourselves to find new ways to keep our planet healthy for future generations. Our goal has always been not just to drive progress in our supply chain, but to drive meaningful change across the industry.” Student participating in a SEED Program class in China.

In 2018, Apple built on its existing educational and career-building programs for supplier employees by adding courses that include App Development with Swift. The program’s first participants created more than 40 apps, ranging from workplace tools to games. Last year, more than 1,500 employees at Apple suppliers earned a college degree, adding to the thousands who have taken advantage of education programming, which expands every year. Additionally, Apple has worked with its suppliers to create health training programs that have reached more than 250,000 people globally, and include courses on nutrition and maternal health.

Apple has also strengthened its efforts to help its supply chain conserve resources, expand the adoption of safer chemicals and reduce pollution. In prioritizing Zero Waste to Landfill, Apple suppliers have diverted 1 million tons of garbage in three years. Apple’s clean water program expanded to 116 suppliers, resulting in 7.6 billion gallons of water saved in 2018 — one gallon for every person on the planet. The company also worked with suppliers to reduce greenhouse gas emissions by more than 466,000 annualized metric tons, which is equivalent to taking 100,000 cars off the road for one year. 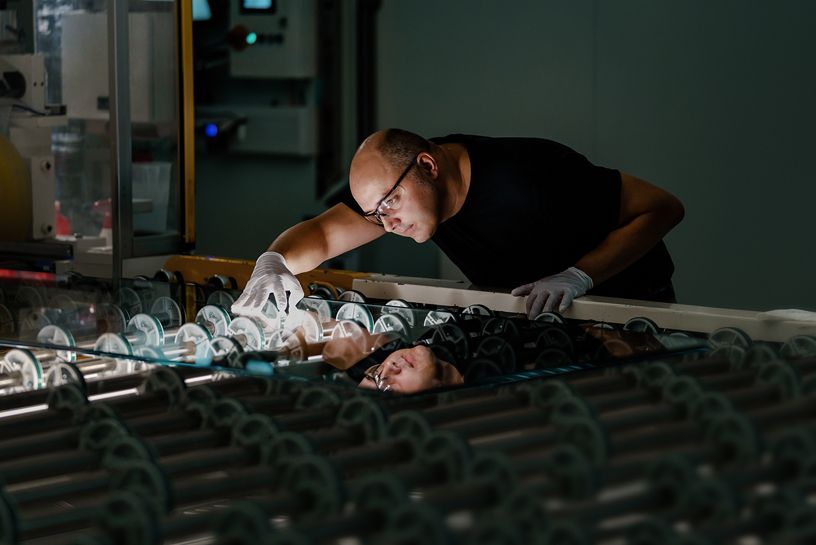 A digital printing shift foreman at an Apple Store glass manufacturer in Germany.

Every year, Apple demands its suppliers meet higher standards for safe and respectful workplaces. Companies are assessed according to Apple’s Supplier Code of Conduct, which includes more than 500 criteria, and Apple works with suppliers on the ground to achieve improvements where needed. In 2018, the company increased support for new mothers — leading the industry in requiring suppliers to provide nursing rooms on site. To make sure suppliers were meeting this and other standards, Apple conducted 770 assessments of facilities in more than 30 countries in 2018, covering 93 percent of the company’s supplier spend.