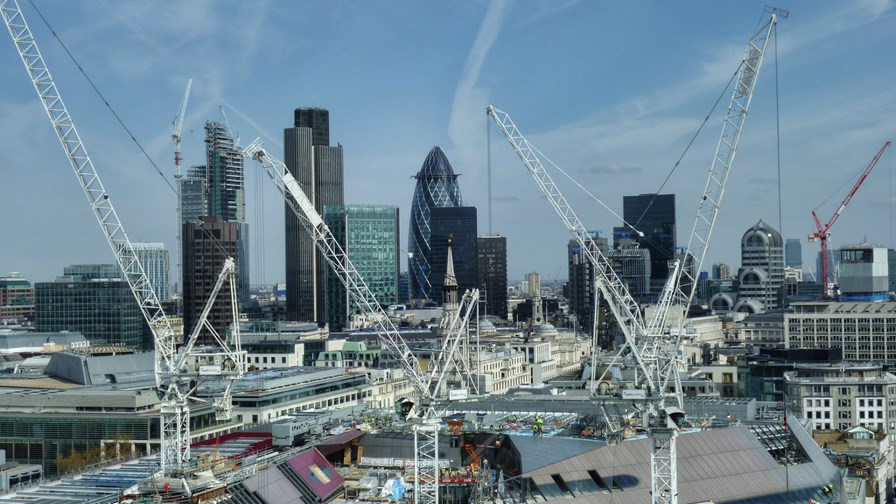 The insatiable demand for mobile bandwidth in London continues unabated as the users of smartphones and other mobile devices consume ever-more mobile data. Way back when 3G was finally introduced in the UK - after many a delay and a series of false starts and broken promises - the networks soon struggled to keep up with subscriber demand and now, even with incomplete so-called '4G' coverage, London's networks are creaking at the seams. The fact of the matter is that the arrival of 5G and IoT could bring the whole schemozzle to a grinding halt - unless network operators plan ahead now.

In 1852 Karl Marx wrote that unless mankind learns lessons from it, history will repeat itself, the first time as as tragedy and then the second time as farce. If that's true it doesn't augur well for the much-ballyhooed arrival of 5G and full-scale ubiquitous IoT. When 5G hits the ether the strain on the mobile operator networks could be so intense that many will simply fall over as too many subscribers seek to access too many broadband-guzzling services and apps.

The network operators themselves are all too aware of the increasing threat they face but are, to say the least of it, remarkably coy about admitting as much in public preferring instead to big-up a rosy mobile future rather than tempering rising consumer expectations with a corrective dose of a few well-placed and well-considered caveats.

Hitherto, mobile service providers have ameliorated the worst effects of excessive demand by adding new base-stations to their overstretched networks but London is a very big place and simply to get a new base-station up and running can be an expensive, time-consuming process set deep in a baffling bureaucratic maze - hence the current focus on and popularity of small cell technology.

Small cells permit mobile operators to increase their reach, in terms both of coverage and capacity, well beyond the confines and limits of their legacy network. What's more they form an emergent ecosystem that will provide mobile operators with a clear path to 5G and give them the capability to plan for it and the long-term future.

In that regard, this morning two companies, Luminet and CCS, have announced that they have partnered to to provide mobile service providers and network operators in London with a small cell backhaul and enterprise network solution that will enable businesses to receive  up to 1Gbit/s Internet access and also provide mobile operators with wireless backhaul for their small cell deployments.

The industry body, the Small Cell Forum, is, as you might imagine, dedicated to the support of the wide-scale adoption of "small cells" which it defines as an "umbrella term for operator-controlled, low-powered radio access nodes, including those that operate in licensed spectrum and unlicensed carrier-grade Wi-Fi. Small cells typically have a range from 10 metres to several hundred metres".

The organisation focuses on two main areas. The first is standardisation, regulation and  interoperability and the second is burnishing the business case for the widespread adoption of small cells and integrated hetnets and the marketing and promotion of the same.

Alan Law, the Chairman of the Small Cell Forum says its task is to drive the understanding and enablement of future network transformations with a particular focus on virtualisation of the small cell layer, to prepare small cell technology for mass deployment in heterogeneous networks and exploiting their self-organising capabilities and to ensure that small cell capability and enablers are integrated and  standardised in evolutions such as 5G.

Furthermore, and equally importantly, the Forum works to increase the scope of the small cell industry in vertical sectors such as IoT and M2M and is working on the development of technical solutions and business models that will reduce barriers to entry and boost utility and popularity of small cell solutions via value added services.

Mr. Law comments; “Multi-operator support and new flexible service models are key elements of our 5G vision. In fact the Small Cell Forum recommended to the 3GPP’s RAN 5G Workshop that neutral host/multi-operator enablers should be at the heart of future-looking architectures. Solutions that enable fast and simple deployment are precisely what is required to densify networks.”

Mobile network congestion in London now reaching choke point. Something has to be done

The Luminet/CCS (Cambridge Communications Systems) collaboration brings together in combination the experience and technological capabilities of two specialist companies to create a novel solution to an increasingly pressing problem.

CCS provides self-organising wireless backhaul for small cell, WiFi, CCTV, smart city and enterprise access applications and the company's MetNet system adapts dynamically to changing capacity demands and optimises spectrum usage. Because the physical products themselves are small, unobtrusive and easy to fix to street furniture (lampposts etc.), rooftops and the sides of buildings, it is relatively inexpensive and scales easily. Thus it can be deployed more-or-less ad hoc to meet organic demand for increased broadband coverage and provide improves quality of service even as it forms the foundation of the new network architectures that will be needed for 5G.

Meanwhile, on the other side of the equation, is the Luminet solution. The company is a leading provider of intelligent managed services in the ISP space and has an established market presence across all the major verticals with a focus on finance, professional services, IT services ,media and channel wholesale. Its client base includes large enterprises as well as mid-market and SME customers.

Commenting on today's announcement Steve Greaves, the CEO of CCS, said, “The combination of Luminet’s sites and spectrum assets with our self-organising wireless backhaul is a catalyst for improving mobile services across London. Our flexible mesh architecture enables us to automatically adjust the backhaul topology and assign capacity to wherever mobile operators decide to roll out small cells using Luminet sites. This partnership will simplify and reduce the cost of operators’ small cell deployments considerably.”

Speaking to TelecomTV this morning, Sasha Williamson, the CEO of Luminet, said, “Our partnership with CCS will see one of the first self-organising networks in a Tier One global city, and by adopting a neutral host strategy we are enabling mobile operators to scale to the ongoing increase in mobile data demand in urban areas".

He continued. “Mobile network congestion in London is hitting a crunch point – it is one of the most digitally dependent cities in the world and is the epicentre of the UK’s digital economy, which is growing 32 per cent faster than the rest of the economy. For London to retain its competitiveness on a global stage, having the necessary digital infrastructure is paramount. This wireless backhaul network from CCS and Luminet, utilising the new 3D hetnet mapping capability, is planned for 23 partitions and 250 polygons across 1050 small cell sites. We are already talking to several wireless operators and hope to have at least part of the new network up and running by the end of the year and all of it in place by early 2017." The sooner the better.

Neutral hosting and where to put your 5G small cells