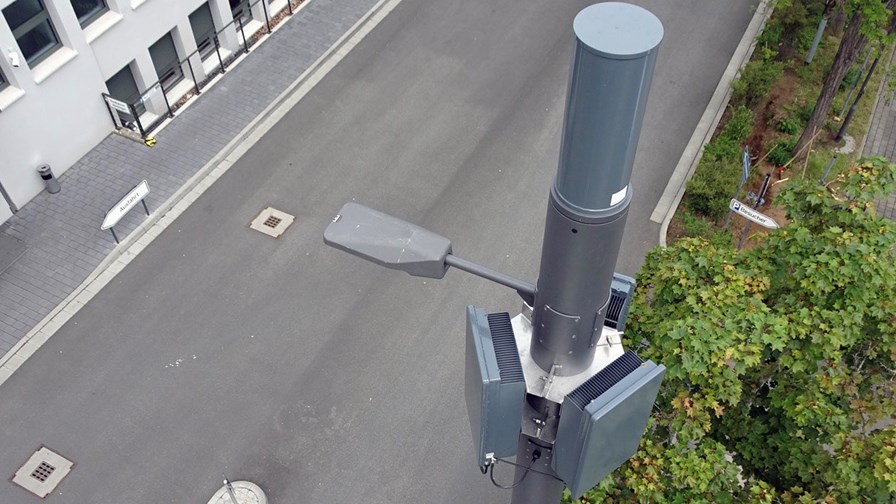 The deployment of what appears to be Germany’s first 5G street light and a new name on the growing list of Open RAN radio vendors kick off this extensive and varied industry news roundup.

Telefónica Deutschland (O2 Germany), in collaboration with energy services company Mainova, has deployed a 5G streetlight in Frankfurt am Main (pictured above). “It reliably supplies its surroundings with 5G throughout the day and also provides light during the hours of darkness using highly efficient LED technology… In the future, real-time applications such as connected driving can also be realised with 5G at such locations,” notes the operator in this announcement. “On the way to our 5G full coverage of the population by the end of 2025, we are investing massively in network expansion throughout Germany. In doing so, we are also focusing on innovative initiatives and solution approaches that accelerate the targeted roll-out of 5G in Germany," stated the operator’s CTIO, Mallik Rao. "The first 5G street light in Frankfurt am Main is a smart approach that sensibly combines two infrastructures that are needed in urban environments anyway and makes efficient use of the scarce space in densely built-up areas,” he added. The street light structure was deployed by Mainova subsidiary SRM Straßenbeleuchtung Rhein-Main, which developed the lighting structure with G&G Stadtsysteme, which says the deployment in Frankfurt am Main is the first 5G street light in Germany. Such infrastructure will become strategically important as operators such as Telefónica Deutschland densify their networks: The German operator says it began accelerating the deployment of its 5G radio access network in October 2020 and aims to cover 30% of the German population with 5G by the end of the year, 50% by the end of 2022, and 100% by the end of 2025. It plans to introduce 5G Standalone deployments from mid-2022. Read more.

STL is joining the ranks of the Open RAN radio unit sector with plans to collaborate with Facebook Connectivity on the design and development of two O-RAN compliant macro radio units as part of the Evenstar program. Chris Rice, the former AT&T networks executive who joined STL as CEO Access Solutions Business in March this year, said, “We are delighted to support and contribute to the Evenstar program to develop 3GPP and O-RAN compliant radio products. Through this collaboration, STL extends its existing commitment towards creating a robust, open and disaggregated, access network ecosystem.” Read more.

Orange has teamed up with satellite operator SES Networks, an existing partner, to offer enhanced broadband connectivity and services to maritime users. Orange is to integrate its global infrastructure with the global network coverage delivered by SES Networks’ Skala Global Platform, which provides worldwide coverage via multiple geostationary satellites and gateways interconnected by a global terrestrial network. Orange says the move confirms its ambition to “become a key player offering solutions for the maritime sector.” Read more.

Ethiopia is to invite fresh bids for the country’s second new telecoms license, having failed to award it to MTN earlier this year, according to Reuters. One new license was snapped up by a consortium including Safaricom and Vodacom in May, but deemed MTN’s offer for the second license too low: Now, according to Reuters, it has sweetened the terms of the license to make it more valuable. The move comes as the Ethiopian government also seeks bidders for a 40% stake of current monopoly national operator Ethio Telecom, an asset that has seemingly attracted the interest of Orange, which already has a substantial presence across Africa.

To overcome what it describes as “computing limitations” in its component supply chain, Google has developed its own System-on-a-Chip (SoC) called Tensor for its upcoming Pixel 6 and Pixel 6 Pro smartphone devices, a move that spells bad news for existing supplier Qualcomm. Read more.

While Google has adapted its components regime for the better (it hopes!), Huawei has found itself so hampered by US trade restrictions that it has launched new smartphones that run its own HarmonyOS operating system (instead of Android) but have no 5G connectivity, reports The Nikkei.

There’s certainly no shortage of private 5G network industry reports and forecasts at the moment. The latest firm to rub its crystal balls and predict the development of the next-gen enterprise wireless networks sector is RAN Research, the wireless forecasting arm of Rethink Technology Research: It believes that “private 5G network deployments will surge over the next few years faster even than public 5G, reaching a peak in 2027 when they will generate $19.3 billion in equipment sales, before subsiding after that as saturation approaches.” Further details about its forecast can be found here. To find out what other companies think about the future of the private wireless network market, see Sizing the private 4G/5G opportunity is harder than it looks.)

The news came as Casa Systems reported an 11.2% year-on-year increase in revenues to $92.7 million for the second quarter. "We delivered another quarter of double-digit top-line growth and experienced strong wireless demand, material progress with our 5G cores and 5G fixed wireless access products, and increased traction with new cable technologies,” noted Jerry Guo, President and CEO. “We ended the quarter with a very large backlog. While we had an exceptionally strong start to the fiscal year, the second half may see some impact from the worsening supply chain situation that’s affecting our entire industry.” Read more.

In a new paper, the Small Cell Forum has outlined the key test configurations for 3GPP TS38.141 compliance testing of split 6 products using the SCF nFAPI 2.0 interface. The 5G FAPI/nFAPI specifications “stimulate innovation and competition across the small cell ecosystem by supporting multi-vendor interoperability within products and between different products of small cell networks, architected within the 3GPP defined disaggregated functional split framework,” notes the Forum. Led by Forum members Keysight Technologies and Picocom, the paper aims to inform operators and integrators on how split 6 products can be tested, with specifications derived from 3GPP standards. Read more.