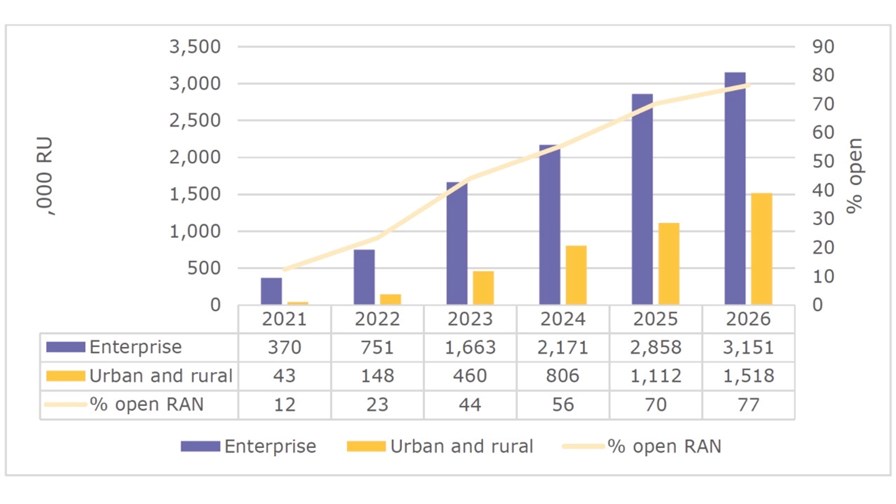 Open small cell architectures are growing in prevalence and will come to dominate deployments in the coming years as enterprises in particular seek out the technology to meet their specific connectivity requirements, according to a new report from the Small Cell Forum.

Open RAN-based units will account for 77% of new small cell deployments in 2026, up from just 12% this year, according to new forecast data from the Forum, driven in no small part by the enterprise space (see chart above).

The industry body's findings show renewed growth in the small cell space from 2022 onwards after a slowdown linked to the Covid-19 pandemic, incidentally, with new radio unit deployments reaching 6.2 million in 2026, up from 3.4 million this year, and the cumulative total hitting 35.7 million.

The growth stems from the impact of 5G, the adoption of new network architectures, and the rise of network-sharing and the neutral host model, it said.

That last point will bring increased diversity to the market. The Small Cell Forum notes that certain environments – in-building enterprise networks and rural rollouts, for example – are difficult for mobile network operators to address profitably, since their business models are based on large-scale network deployment. By contrast, enterprises often have highly specific connectivity needs, while rural and remote areas remain too sparsely populated to enable MNOs to serve them profitably with a high-capacity network.

As such, the forum notes, specialist players in the enterprise space, private network operators, neutral hosts, and cloud-based network-as-a-service providers are emerging to fill the gap, while some mobile operators, keen to avoid being left out of the market, are setting up independent private network operator divisions. Without these units, telcos run the risk of being locked out of the lucrative enterprise space as private networks grow in popularity, and that's clearly a concern for them, and their accountants.

All of these new or redesigned players will be aided by advances in flexible network architectures, access to cloud-based technology like hosted cores, and direct access to spectrum, through shared frequencies and allocations for industrial use, for example.

These players "will be responsible for significant acceleration of small cell build-out because they are able to define strong profit models for environments in which MNOs would be challenged to make a business case," the Small Cell Forum declared. This could be because they can build on a smaller scale or because they offer enterprise-specific services like security, integration and device management.

Whatever the reason, it's food for thought for the telcos. By 2026, more than three-quarters of enterprise small cells will be deployed and operated by private network operators or neutral hosts, according to the Small Cell Forum.

"While the turbulence of the last 18 months has had an effect on deployments, this forecast continues to show not just the crucial role small cells will play in facilitating a 5G future, but also how important new breeds of network deployers will be to delivering it," concluded Prabhakar Chitrapu, Chair of the Small Cell Forum.