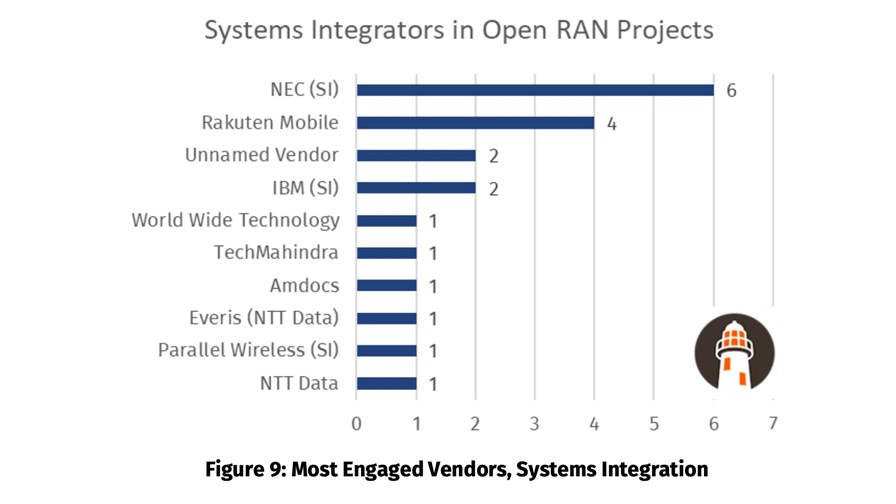 From the Appledore Research report, Who's Winning in Open RAN?

The role of systems integrator in Open RAN deployments and projects is being “hotly contested” and has attracted a diverse set of suppliers, with NEC emerging from a broad pack of integration players as a popular partner, according to a new report from Appledore Research, titled Who's Winning in Open RAN?

But it’s still too early to read how the Open RAN systems integration sector will play out: While NEC is the mostly popular named SI partner, the Appledore team notes that “with more than half of Open RAN projects undeclared as regards responsibility for systems integration duties,” it seems that many network operators are opting to perform that role themselves, at least for now.

Among the systems integrators (SIs) identified so far by operators, NEC is doing relatively well, having been named in six projects, while Rakuten Mobile, courtesy of its Rakuten Communications Platform (RCP) efforts, is not only doing its own Open RAN integration in Japan but is also involved in other projects (Etisalat, stc, Ligado Networks).

Parallel Wireless is, of course, also an Open RAN vendor, and is doing well in that regard: Appledore notes that the “challenger vendors in virtualized RAN (Parallel Wireless, Altiostar, Mavenir) have opened up an early lead in the market” in terms of announced involvements in network operator Open RAN projects.

But there’s also a great deal of information as yet not shared with the market: Of the 41 Open RAN projects being tracked by the Appledore team, 30 have identified vendor partners in only three or fewer of the market categories identified (vRAN, radio units, RAN chipset, systems integration, data centre and edge compute, cloud platform, RIC/xApps, and Orchestration).

The reports delves into the details of each of these categories and reaches a number of interesting conclusions: For example, one of the stated advantages of Open RAN, according to its operator supporters, is that it will broaden the supplier ecosystem and foster greater competition amongst vendors, and that appears to be happening already, as “there are signs of greater diversity in the RAN market” with at least 15 radio unit suppliers identified in Open RAN projects so far, according to the report.

And it’s still early days: That means there will be greater diversity to come but it also means there will also likely be “significant changes to the positions of large vendors,” and not just the telecoms sector’s “usual suspects,” notes the Appledore crew.

Indeed, the research house expects the sector’s big names such as Ericsson and Nokia to ultimately play a major role in the delivery of Open RAN solutions as the market evolves and grows to be worth $11.2 billion by 2026. (See Telcos to ramp Open RAN investments with traditional major vendors, predicts Appledore Research.)