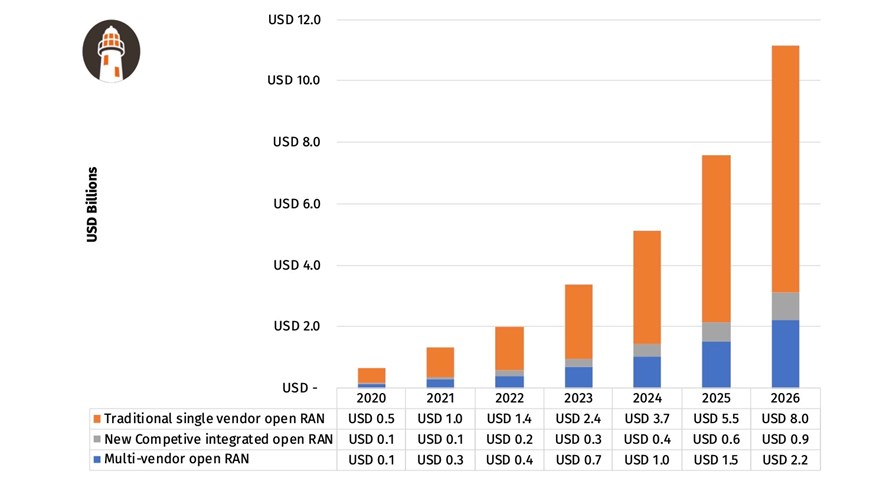 The value of telecom operator investments in Open RAN technology and services is set to soar during the next five years from about $700 million this year to $11.2 billion in 2026, but the vast majority of that capital expenditure will end up with traditional radio access network vendors supplying a single-vendor but open architecture, according to a new report from Appledore Research.

The Appledore team doesn’t expect overall spending on RAN technology and associated services to change much in the coming years – “it hasn’t really changed much in the past few decades,” notes Francis Haysom, Principal Analyst, Wireless – so Open RAN is set to account for a growing slice of the overall market in the coming years, with operator investments starting to ramp into the multiple billions of dollars from about 2023 onwards (as the chart above shows), which is in line with the rollout plans of major operators such as Deutsche Telekom and Vodafone and the expectations too of major vendors such as Ericsson.

By 2026, Appledore expects Open RAN to command about 32% of total telco RAN investments.

Ultimately, by about 2035, the Appledore team expects all RAN spending to be on “open” technology and services.

But while an increase in Open RAN investments has been regarded as a major challenge for the traditional suppliers of RAN systems and services – in particular the dominant trio of Ericsson, Huawei and Nokia – Haysom and his colleagues expect the large traditional vendors to also dominate the Open RAN market with single vendor but open systems that are relatively easy for operators to deploy: Of the expected $11.2 billion spend on Open RAN by telcos in 2026, Appledore expects about $8 billion, more than 70% of the total, to go to the large traditional tech suppliers, which would include the likes of Samsung Networks that already have a slice of the current RAN market.

“If you look at most of the Open RAN initiatives, they’re increasingly becoming dominated by the traditional vendors. Everyone will [supply] Open RAN at some time in the future – Huawei is a laggard right now, Nokia is ahead of the curve and Ericsson is starting to change its mind – so I think it’s possible to predict that to a degree everything will be open but [operators] will still want to buy an integrated solution. Telcos are a pretty conservative bunch, they’re quite constrained,” says Haysom, who adds that procurement processes and the security of working with companies that have the resources to deal with unforeseen challenges, underwrite risks and provide some degree of business assurance will also be factors in this regard.

So according to Appledore, the new Open RAN-focused challenger vendors are only set to get a slice of the market: In 2026, about $0.9 billion is expected to be spent on pre-integrated architectures based on recognized blueprints from alternative non-traditional vendors, while only $2.2 billion (about 20% of the total telco Open RAN investment) will be spent on “truly multi-vendor Open RAN.”

That 20% will be spread thinly, but the biggest opportunity in this portion of the market lies in systems integration (SI), according to the research firm: It expects about 30% of the multi-vendor Open RAN spending in 2026 (so about $660 million) to go to SI services. Competition in this area to be fierce, with the services arms of the traditional vendors, large integrators such as Tech Mahindra or Infosys, a hyperscaler such as Microsoft, or even an operator such as Rakuten Mobile (which has plans to help take Open RAN global via its Rakuten Communications Platform initiative) all scrapping for the integrator role. Some operators will opt to do their own integration, adds the Appledore team.

If the Appledore view of the Open RAN market is accurate, what is the optimum approach for the small specialist vendors seeking to grab a slice of the market and help provide the alternative technology options the operators are currently keen to see?

Haysom believes those companies need to start working together, developing “ecosystem clusters” that can prove interoperability and collaboration that can help ease integration and procurement challenges while still providing the operational benefits of open, disaggregated systems.

But while the shift by operators towards Open RAN architectures will not provide as great a market opportunity for new entrants as might have been hoped, according to the Appledore team’s expectations, it will still disrupt the market and is about much more than just providing operators with more vendors to choose from.

“This is revolutionary and new dynamics are now in play,” says Appledore’s Robert Curran, who notes there are a lot of different factors influencing this shift. “The cloud piece, the political environment, consolidation, enabling the next billion connections… they all just happen to be in the same place at the same time and they all run through Open RAN. Anyone who says this is just [about providing an extra] option is missing the point or missing the perspective – this is bringing to light issues and challenges at all levels of the industry,” states Curran.

The report, which concentrates on the telco/CSP market (and doesn’t include enterprise/private network potential spending on Open RAN), also looks at the weaknesses of, and threats to, the growth of the Open RAN market, the relationship between Open RAN and 3GPP developments, and what might come next in terms of distributed cloud native software functionality and the “end of Gs.”

An executive summary of the report, Open RAN – Opening the RAN Ecosystem for Competition and Innovation, is available from Appledore research’s website.