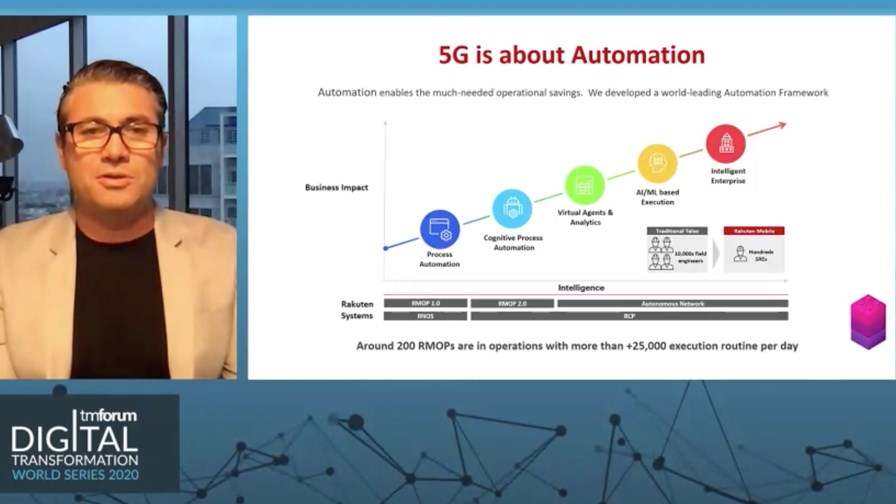 Talking during a Digital Transformation World keynote presentation, ‘Making autonomous networks a reality,’ the CTO explained how his company’s greenfield 5G network, launched just weeks ago, had been designed and constructed form the ground up to be fully automated and that deploying a cloud native network with Open RAN technology is a key part of that strategy.

The operator’s 4G network, which launched in April this year, was built using virtual machines with virtualized core and radio functions, but the 5G network is a “cloud native” architecture based on containers that are more flexible and agile, noted Amin.

“With 5G wanted to move away from virtualization to a completely cloud native architecture. 5G should always start with cloud… standardization of hardware and moving into containers makes a huge difference,” he told the TM Forum's event audience.

“We think automation is the underpinning of everything we are going to do in the network, and to discover the benefits of automation we think the architecture needs to have support for telemetry, advanced analytics and a massive transformation of OSS and BSS… Key for anything in 5G, and even 4G, is what you do in automation and a lot of the work we have done here is to re-invent the legacy infrastructure boxes such as OSS, BSS and focus on a lot more use cases for AI and machine learning,” he added.

With regards to automation, Amin said it is a “culture” that has been at the heart of Rakuten Mobile’s development “from day zero… I call it a culture because everything we do to the network must be fully autonomous.”

He continued: “We think we are heading towards a Level 4 autonomous network – in two years from today I really believe this will no longer be a white paper… a network that is self-organized, self-optimized to address real-time issues that might happen in the underlying infrastructure and ensure service continuity without the necessity of complex organization and building blocks you might have in the previous structures.”

And much of the CTO’s focus has been on the radio access network to start, while work on the 5G standalone core is ongoing.

“Open RAN is an absolutely critical element as we move towards automation and autonomous networks, which I don’t see [the industry] talking about enough – we believe Open RAN is the most crucial component for this industry disruption… the possibility of moving to open interfaces [and] what you can achieve with automation, this industry is still in the early days of discovering.”

In the 5G network, all of the radio access network and core functions will be containerized, and “we started with the radio software architecture because we need to push the envelope on the level of automation we need for radio. Containerization is critical for operation… when you get a service interruption or an issue in a VM [virtual machine] – and let me take the radio as an example – the image size of a VM today, if it’s not built on microservices, is actually very large. So imagine you are trying to re-spin another VM that is sized to a 2 GB size – the time it takes to do this, the healing, elasticity, it takes time. When you go to cloud native, to microservices, the healing is much better, elasticity is much better.”

Amin said Rakuten Mobile started its cloud native work with the radio access because the “quantity of radio was substantially more in terms of the physical assets we have deployed and, with the core, we did not want to compromise. We did not want a core that was not built on the principles of our cloud native architecture: Within Rakuten Mobile we have a certification process that a vendor has to obtain in order to be labelled as an RCP [Rakuten Communications Platform] Platinum application provider, and we didn’t feel the core architecture was ready for standalone to be launched on the Rakuten Cloud platform – that will completely finish by end of March next year,” said the CTO, who said the 5G core development is being done in collaboration with NEC on a basis of “source code sharing.”

Once the 5G standalone core is in place, the Rakuten team will work on re-code and containerize the 4G network functions and “the 5G node that will become the core for everything… we are targeting a 15 months window” for that to happen, said Amin.