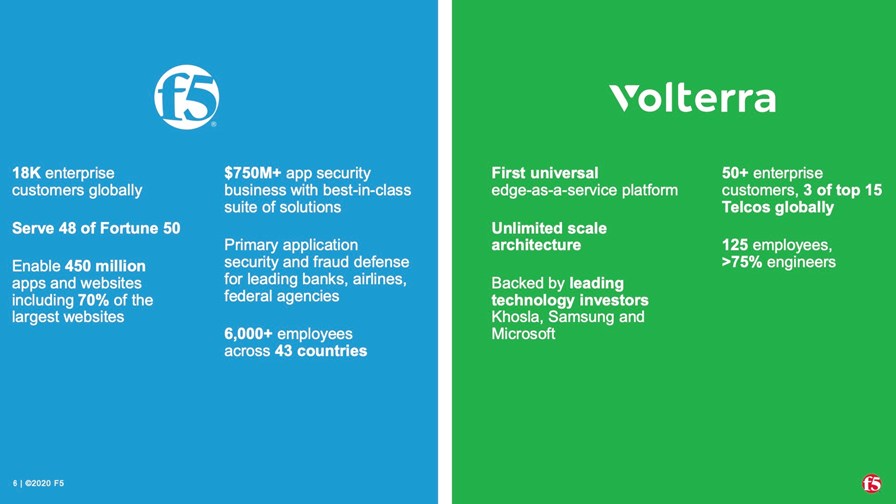 Applications security specialist F5 has struck a $500 million deal to acquire multi-cloud management specialist Volterra in a move that will help it develop what it calls an Edge 2.0 platform.

F5 also took the opportunity to update on its improving financial situation: Not only will the addition of Volterra boost its sales, but the company has been doing well during 2020 and expects its revenues for the final three months of 2020 (the first quarter of its new fiscal year) to come in at $623-626 million, up by 10% year-on-year, while its earnings are expected to exceed the high end of its previous forecast of $2.26 to $2.38.

Volterra, which is only three years old, has developed a cloud native software stack designed to manage applications across any public and private cloud instances, enabling enterprises, service providers and any other users to manage their cloud estate in a consistent and unified fashion across multiple networks and platforms. Such capabilities are becoming increasingly important as companies shift more and more applications and workloads onto distributed public and private cloud platforms that can give operations teams application and security headaches. The company has more than 50 customers, including three major telcos, including Softbank (see image below).

“Current edge solutions are simply inadequate for today’s enterprise customers. It’s time to break out of closed edge systems that only perpetuate the pain of building, running, and securing apps,” stated F5’s President and CEO François Locoh-Donou in the official announcement of the acquisition, which is set to close during the first few months of 2021.

“With Volterra, we advance our Adaptive Applications vision with an Edge 2.0 platform that solves the complex multi-cloud reality enterprise customers confront. Our platform will create a SaaS solution that solves our customers’ biggest pain points. The success of F5’s software transformation has put us in a position to deliver on the potential of Edge 2.0 and redefine our competitive position,” added Locoh-Donou.

The Edge 2.0 platform will, according to F5: Have integrated security (rather than bolt-on security functions), which of course is F5’s speciality; enable “build once, deploy globally” app delivery enabled by standard cloud native code and interfaces; and eradicate closed edge silos, enabling applications and services to run on any server in any cloud and break free of the “CDN jail.”

Once the acquisition is completed, Volterra’s leadership team, including CEO and founder Ankur Singla, will “join F5 in key management roles.”

In a blog announcing the deal, Singla noted: “The need to deliver rich digital experiences has meant that more and more of our customers are asking for expanded security and reliability features that are seamlessly integrated across their clouds and edge deployments. As part of F5, we will have access to industry-leading app security capabilities to augment our unique SaaS-based networking, security and app management platform. We also get immediate access to a top-tier go-to-market team that has the deep industry experience in the app delivery and security market.”

Singla seems to have an enviable knack for building leading edge companies that get acquired -- he founded SDN controller specialist Contrail Systems that was acquired in 2012 for $176 million by Juniper Networks, where he worked until 2018 while he got Volterra, founded in mid-2017, off the ground. Prior to forming Contrail he was the CTO at Aruba, which was ultimately acquired by HPE in 2015, and also had stints at Cisco and Juniper (so he worked there twice).

Volterra had raised $50 million in one round of funding that was announced in November 2019: Samsung and Microsoft were among the investors, while Softbank was identified as an early customer. (See this press release.)

The $500 million deal comprises $440 million in cash and $60 million in “deferred consideration and assumed unvested incentive compensation to founders & employees.” 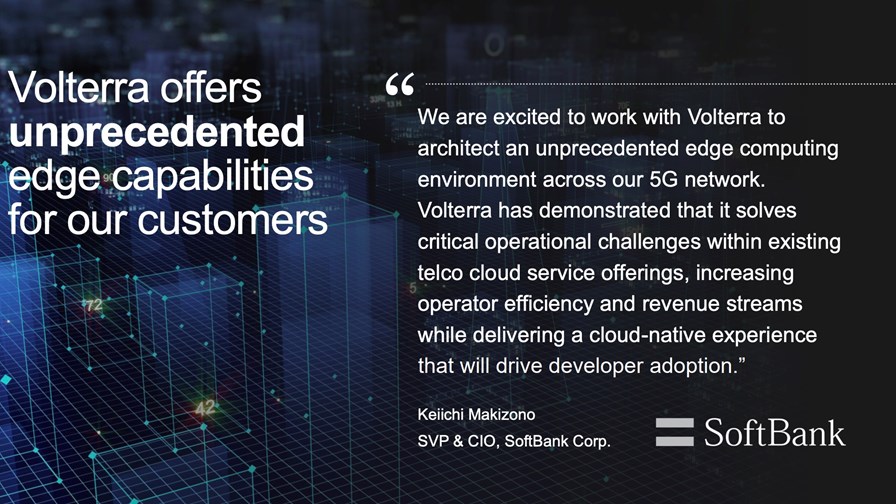 News of F5’s acquisition comes as telcos continue to develop their edge relationships with the hyperscale giants, bring targeted enterprise service offerings to market and develop ways to enable edge service roaming across multiple networks and territories: The success of telco edge strategies will hinge on the ability to enable the flexible, secure and consistent delivery of edge resources and associated networking capabilities. (See Telcos tune in to edge services wavelength and Major telcos claim edge roaming success.)