Though a flat growth was seen in the PRC market in 2017Q2, more activity expected in 2017H2 with more flagship launches, says IDC

SINGAPORE, August 3rd, 2017 – The latest IDC Quarterly Mobile Phone Tracker reveals, 111.8 million smartphones were shipped to China in 2017Q2, and the year-on-year (YoY) growth was flat this quarter. After the extremely high 2016Q4 which saw OPPO, vivo and Huawei launching popular flagships that helped to drive replacement growth, the market has started to slow down. Reasons include leftover inventory from the previous quarter, as well as key flagships from OPPO and vivo being launched only towards the end of 2017Q2 and beginning of 2017Q3. Nevertheless, we expect smartphone shipments in 2017H2 to be higher than that of 2017H1 as companies such as Apple and other Chinese players push some of their flagship products that will help to drive some numbers.

These are some of the highlights for the second quarter of 2017:

Here are some of the activities we expect to see in the second half of 2017 centering around key smartphone company trends, specifications and ASPs:

“With consumers seeking better experiences with their smartphones, we expect the mid-range (US$200<US$400) smartphone segment to gain a bigger share of the market across the next few years, as more users upgrade their phones. This will soon become the primary segment in China. Smartphone companies should focus on increasing most of their volumes from this segment, paying attention to specifications that are important to consumers such as processing speed, camera and battery life. They should also ensure that their phones are designed to look like premium models and are significantly different from previous iterations,” says Tay Xiaohan, Research Manager with IDC Asia/Pacific's Client Devices team. 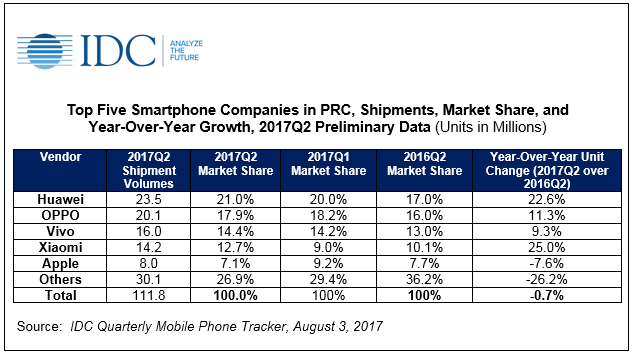