Rakuten Mobile: Can the cloud native poster child also be a hit at home? 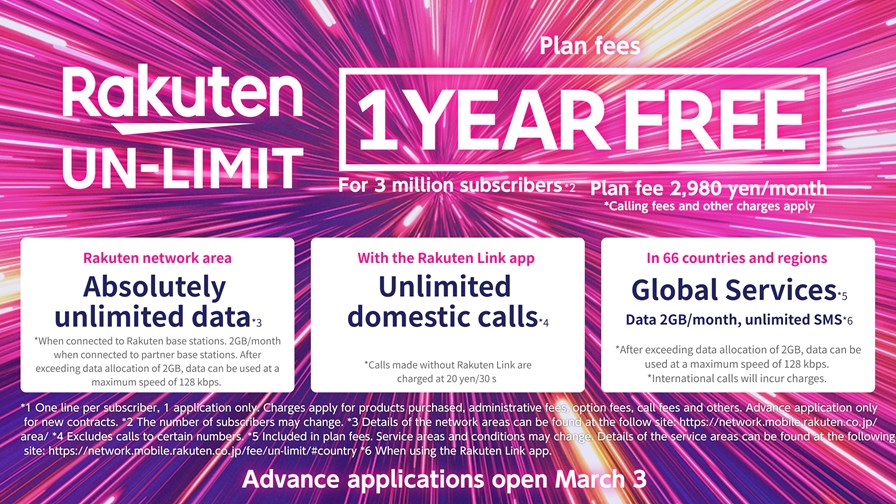 There’s little doubt that Rakuten Mobile, which has built a greenfield 4G/5G network based on disaggregated and cloud native elements and which is offering its cutting-edge open source technology to other operators via its Communications Platform (more on that later), is one of the most talked about companies in the global telecoms sector today. But is its immediate target market – Japanese consumers – as excited?

With some fanfare, Rakuten Mobile announced in March a low-cost voice and data services package called UN-LIMIT, which was to become available on April 8 and be free for one year to the first 3 million customers who signed up. That sounded like a very attractive proposition, one that might have Rakuten’s domestic incumbent rivals – NTT DoCoMo, KDDI and SoftBank – concerned about losing customers.

Now Rakuten Mobile says that, up to June 30, more than 1 million customers have already applied for the 4G service, which costs 2,980 yen (US$27.67) per month to those not getting it for free: “This is a terrific achievement,” states the operator’s CEO Mickey Mikitani in an official announcement.

But is it that terrific? There clearly hasn’t been a massive rush to snap up those free-for-a-year subscriptions and at least one industry analyst is lukewarm about the uptake.

“I am not surprised [by the number], but neither am I impressed,” notes Dario Talemesio, a Research Director focused on service provider strategies at Omdia (formerly Ovum). “Japan is a market with 180 million connections and ARPU of around US$37… the UN-LIMIT service tariff is very attractive, but it’s not jaw-dropping. Possibly some of the complexity around on-net vs off-net price plans applied by Rakuten are a bit of a hurdle.”

It’s hard to imagine that the ‘on-net and off-net’ situation isn’t a significant factor. Rakuten Mobile is still building out its own network and, as its network map shows, its ‘on-net’ service is still limited to three urban areas, while the majority of its coverage is ‘off-net’ on wholesale partner KDDI’s network, where different data limits apply.

It’s early days for Rakuten Mobile and hitting the 1 million mark is a milestone of note, but ultimately its network coverage challenges may hold it back from being a bigger thorn in the side of rivals such as DoCoMo, which has 79 million customers.

Rakuten Mobile, though, is more than just a disruptive mobile service provider – it’s also a champion of cutting-edge networking technologies and keen to offer up the software it is using in its network to other operators via its Rakuten Communications Platform (RCP), which “contains all the elements of the Rakuten Mobile network, including telco applications and software from multiple vendors, OSS and BSS systems handling customer billing and activation systems, in addition to edge computing and virtual network management functions.”

Those elements are made available to other telcos and enterprises via the RCP Marketplace: The operator announced at the beginning of June that its 5G Core, developed in partnership with NEC, would be offered as an app on the RCP Marketplace.

Now Rakuten has set up an international headquarters for its RCP initiative in Singapore and has appointed Rabih Dabboussi, an industry veteran who spent 20 years at Cisco, as head of sales and marketing.

In addition, Rakuten plans to “establish a US entity in California that will serve as a hub for international business expansion in the Americas.” That operation will be headed by Azita Arvani, who is General Manager, Rakuten Mobile, Americas: Her CV includes more than seven years at Nokia, where she was Head of Innovation Partner and Venture Management.

And the RCP has been further bolstered by network security specialist F5 Networks, which has agreed to “provide an extensive suite of application security services” for the RCP.

And that’s not the end of the Rakuten Mobile news: It has also announced that Japan’s New Energy and Industrial Technology Development Organization (NEDO) has selected two Rakuten Mobile R&D initiatives to become part of the “Project for Research and Development of Enhanced Infrastructures for Post 5G Information Communication Systems.”

One project is researching the virtualization of 5G radio access network (RAN) technology, while the other is focused on integrated management and automated optimization for cloud-based networks. The results of the research will be fed into the RCP, notes Rakuten.