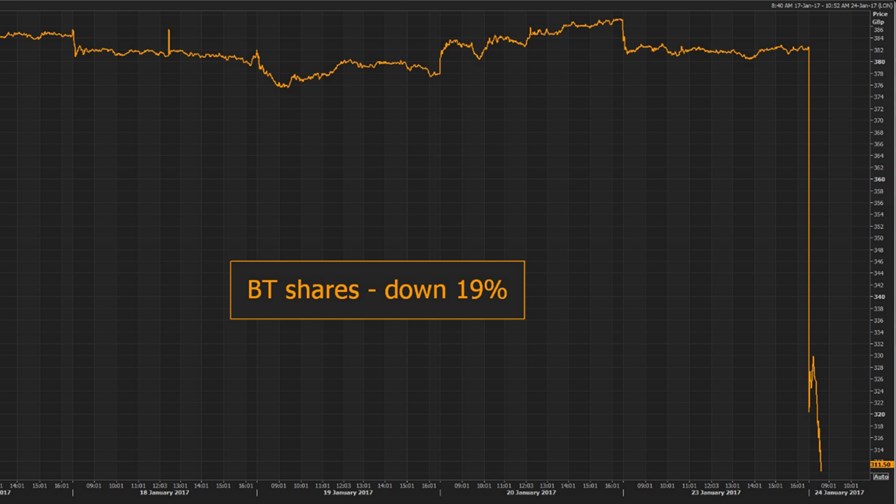 It’s widely expected that Corrado Sciolla, the head of BT's Continental European operation, will resign - possibly today - in the wake of BT’s revelation that it's to write down the value of BT Italy by £530m after discovering years of ongoing accounting fraud.

Just one day after it announced a raft of price rises, the UK’s incumbent operator has been hit hard by the uncovering of extensive accounting fraud in its Italian operation that has seen its share price plummet by 19 per cent today, wiping £6 billion off the value of BT’s shares. BT’s Italian division has been caught out using “improper accounting practices” to the tune of £530 million. In response, BT has reportedly slashed its revenue forecasts for the next two years.

BT released the news this morning just as investors and analysts were looking forward to getting BT’s year end results for 2016 on Friday.

That there had been accounting irregularities at BT Italy was already known - in October last year BT announced that it had unearthed “inappropriate management behaviour” at its Italian division, but trotted out some soothing management speak to the effect that it was all down to “historical accounting errors” and so on, with the reassurance that it would take a non-cash charge of £145 million to absorb the ‘errors’ which had not ‘materially’ affected its reported earnings. It talked of balances that had built up over a number of years. Stay calm and carry on.

Now, however, the assurances have turned out to be ‘alternative facts’. BT let accountants KPMG loose on the books and it has exposed the full extent of the irregularities which turned out to have been very substantial indeed.

KPMG has found that the Italian division had used “improper accounting practices” involving improper sales, purchase, factoring and leasing transactions (just about everything, in other words). As a result BT now estimates the cost of the scandal has risen to £530 million, much higher than the £145 million previously stated and very much material to BT’s business.

Chief Executive of BT Group, Gavin Patterson, has expressed himself “deeply disappointed with the improper practices which we have found in our Italian business. We have undertaken extensive investigations into that business and are committed to ensuring the highest standards across the whole of BT for the benefit of our customers, shareholders, employees and all other stakeholders.”

Patterson may be disappointed, but so are BT’s long suffering (and often long-term)  shareholders. The BT’s chief executive’s annual bonus (£1 million), share awards (£3 million) and salary came to £5.3 million last year. Finance director Tony Chanmugam earned  £2.8m and a £587,000 bonus.  Observers expect that the latest problems might mean that Patterson’s bonuses will come under the scrutiny of the company’s remuneration committee. Not only his next bonus but, given that the Italian losses roll back over several years, perhaps even payments for years past.

The admission of the Italian loss just piles more misery on BT management after a rocky year and is likely to further sap investor confidence in the company. Not only has BT spent considerable sums on BT Sport, profiling it as one of its important strategic investments calculated to help build a healthy next generation video business as grinding growth out of today’s core fixed line revenue streams  - voice and broadband - becomes harder. It’s also shouldered a massive extra debt load (on top of its huge pension deficit) with its £12.5 billion purchase of  UK mobile operator EE.

Then there is the deterioration in BT’s international corporate and UK public sector businesses - headwinds which BT admits means that group revenue won’t grow for the next two years, in any case.

6G must not be a ‘step change,’ says BT Research Director

What do operators want from 6G?