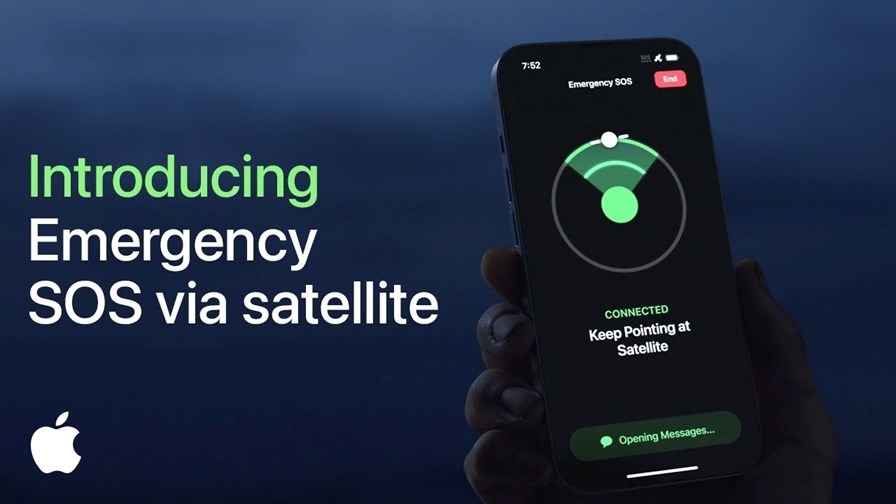 In today’s industry news roundup: Apple’s iPhone 14 safety service is live in four European markets; Elon Musk is now allegedly only worth $177bn and, in an unrelated move, is auctioning some very important items of hardware from the Twitter HQ; sustainability has become a “strategic priority” for many enterprises, finds Vodafone Business; and more!

A month after launching it in the US, Apple has made its Emergency SOS safety service, which uses satellite connectivity, available in France, Germany, Ireland and the UK. “Available on all iPhone 14 models, the innovative technology enables users to message with emergency services while outside of cellular and Wi-Fi coverage. Additionally, if users want to reassure friends and family of their whereabouts while travelling in an area with no cellular or Wi-Fi coverage, they can now open the Find My app and share their location via satellite,” notes Apple in this announcement. Enabling communications services beyond the reach of terrestrial networks has been a major trend in the telecom sector this year thanks to companies such as T-Mobile US, SpaceX/Starlink and AST SpaceMobile and Omnispace – see T-Mobile US and SpaceX plot to kill mobile ‘dead zones’.

Elon Musk might just look back at 2022 as a defining year in his business life for many reasons, of course, but primarily for the impact of his ultimately enforced move to acquire Twitter for $44bn. According to The Guardian (citing research by Forbes and Bloomberg), Musk is no longer the richest person in the world, with his personal worth having been hit by the decrease in the value of his shares in electric vehicle giant Tesla, of which Musk is CEO and its largest shareholder. Tesla’s stock price has lost more than half of its value since Musk bid for Twitter, where much of the billionaire’s attention seems to be focused these days (and let’s not forget he also runs satellite firm SpaceX…). According to the bean counters, Musk is now worth just $177bn (shed a tear please folks). Musk’s crown has been taken by French tycoon Bernard Arnault, the co-founder, chairman and CEO at the LVMH empire that includes Louis Vuitton and Sephora: He is believed to be worth $188bn. But is he happy? Probably.

Sticking with Musk, and much more importantly… According to Sprudge, which describes itself as “the world’s most popular coffee publication, a global hub for coffee culture and original journalism since 2009,” Twitter, as part of a broader effort to sell “anything not bolted to the floor” at the social media firm’s San Francisco headquarters, is auctioning “a pretty astounding amount of coffee gear. That “gear” includes “no less than five espresso machines… including one three-group La Marzocco Strada, three one-group Linea EEs, and a Unic Tango automatic for good measure. But what good is an espresso machine without a grinder? Luckily, two Mazzer Super Jollys are on the chopping block as well as four BUNN grinders. And there are three FETCO CBS-2152-2-XTS double automatic coffee brewers to round out your lightly used coffee shop necessities,” notes Sprudge’s Zac Cadwalader. The reason this is all being sold, according to speculation, is not so that Musk can raise a few greenbacks and take back the title of world’s most filthy-rich person, but because Twitter’s HQ will move to Texas for tax reasons and Elon’s van isn’t big enough to take all the furniture. What we should be focused on, though, is that there is some quality hardware up for grabs for anyone in the Bay area and, remember folks, this is hardware that CANNOT be virtualised. These are monuments of physical beauty.

Sustainability is increasingly considered one of the most pressing goals for businesses. According to Vodafone Business’s latest “Fit for the Future” report, it has become “a strategic priority for businesses” that find themselves under increased pressure from consumers and investors. Looking at US enterprises, this priority is now considered “a competitive advantage”, with more than 60% of the 301 US companies surveyed by Vodafone citing sustainability as a potential differentiator, while more than half have made it a strategic goal. Additionally, the implementation of sustainable practices has realised “significant benefits” for businesses as 47% of those that reported higher profits this year have a formal environmental, social and corporate governance (ESG) programme in place. Only 22% of firms with lower profits had implemented such programmes.

Staying on topic… A number of telcos have received recognition by global non-profit organisation CDP (formerly the Carbon Disclosure Project) for their climate management efforts. Companies that were awarded the highest level of ranking, the so-called “A List”, include Telefónica, Tele2, NEC and KDDI.

Openreach, BT’s quasi-autonomous wholesale fixed access network operator, is in the news today because of its latest controversial discounted pricing offer for ISPs, but it’s also been attracting attention for some traffic stats from the weekend, as it claims more data traffic was carried over its network on Sunday 11 December than on any previous single day.  Some “229 petabytes of data was carried across the network, compared to the previous highest day, Sunday 5 December 2021,” when 222 petabytes traversed the network. (One petabyte equals 1 million gigabytes and, according to Openreach, an average 4K resolution movie stream eats up about 7.2 gigabytes per hour.) That’s a lot of data, but quite how much that is per active Openreach wholesale line connection is a stat we’re still waiting to see if the operator will share.