T-Mobile US and SpaceX plot to kill mobile ‘dead zones’ 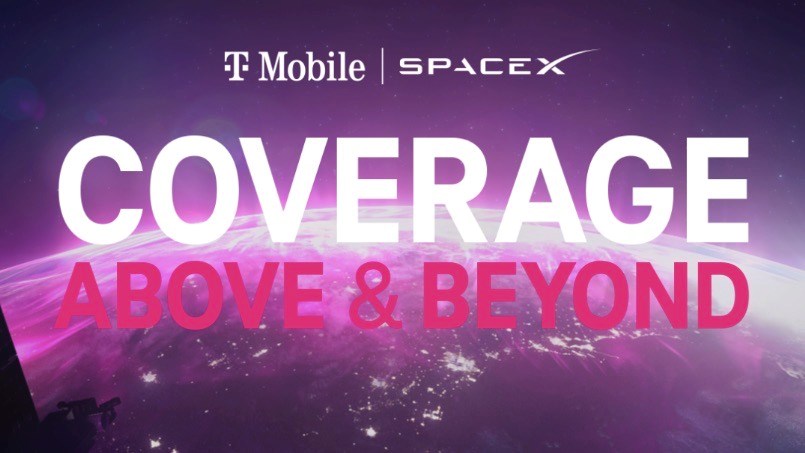 T-Mobile US and Elon Musk’s SpaceX have announced “Coverage Above and Beyond”, a plan to offer mobile connectivity “everywhere” across US territories by using satellite coverage where cellular signals are unavailable: Ultimately, the partners want to extend the service internationally via roaming agreements with other mobile operators.

During a live-streamed presentation late Thursday from SpaceX’s Starbase facility in Texas (see the picture below), the mobile operator’s CEO Mike Sievert and Musk, the CEO and chief engineer at SpaceX, announced a plan to use the coverage offered by Starlink, the SpaceX constellation of LEO (low earth orbit) satellites, to provide connectivity services to T-Mobile US customers wherever the carrier’s cellular network cannot provide coverage, effectively to “provide near complete coverage in most places in the US – even in many of the most remote locations previously unreachable by traditional cell signals,” the operator noted in its announcement.

What’s key to this plan is that the service doesn’t require users to have a separate device.

“It’s a lot like putting a cellular tower in the sky… just a lot harder,” noted Sievert during the presentation. “And that’s why we’re here with the world experts from SpaceX,” who believe they’re able to effectively extend T-Mobile’s network into space and provide cell coverage anywhere within US jurisdiction by using mid-band spectrum for which T-Mobile US has a licence from the FCC.

“We’re using a piece of spectrum your phone already knows how to connect to,” noted Sievert. For “the vast majority of phones out there… our aspiration is for them to work right out of the gate with this,” he added, with the service being offered for free as part of T-Mobile US’s “most popular plans.” 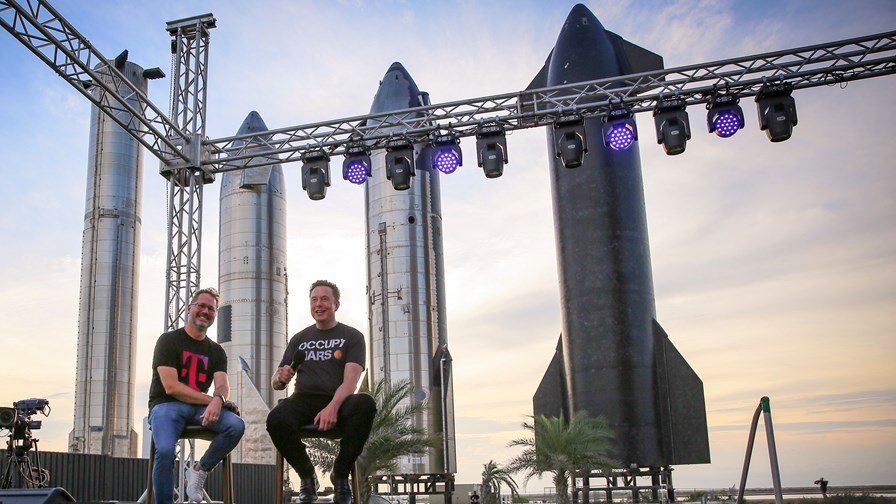 T-Mobile US CEO Mike Sievert (left) buddies up with SpaceX chief Elon Musk (right) at the Starbase facility in Texas.

It’ll take time to get up and running, though. A beta service will be tested in select areas late next year following the launch of additional Starlink satellites and then, initially, it will be limited to “text coverage practically everywhere in the continental US, Hawaii, parts of Alaska, Puerto Rico and territorial waters, even outside the signal of T-Mobile’s network… Text messaging, including SMS, MMS and participating messaging apps, will empower customers to stay connected and share experiences nearly everywhere. Afterwards, the companies plan to pursue the addition of voice and data coverage.”

Musk noted: “The Starlink second generation satellites will be able to transmit directly to your mobile phone. It won’t have the kind of bandwidth that a Starlink terminal has but it will enable texting and images and if there aren’t too many users in the cell zone, it may even allow a bit of video. The important thing about this is that it means there are no dead zones… for your cellphone.”

He added: “What is profound about what we’re announcing today is that it will save lives and avoid tragedies and massively increase people’s convenience.” He cited the examples of hikers getting badly injured in remote areas or people stuck in blizzards who would be uncontactable currently but have a communications lifeline with this service. The example of Aron Halston, the mountaineer who cut part of his arm off to free himself after an accident in a canyon and who was the subject of the movie 127 Hours springs to mind: Musk also jokingly referenced the example of someone who might get “stranded on a desert island and start talking to a basketball,” referencing the Tom Hanks movie Cast Away.

That's all well and good, but at the end of the day this is not a humanitarian programme – the two companies are doing this to gain a competitive and economic advantage over rivals, attract and retain customers, and make more money: That lives might be saved is a cuddly value-add.

And like any business endeavour, getting to market won't be cheap. Users might not need new devices for the service to work, but Starlink has had to develop new satellites and a lot of new gear, noted Musk.

“We are constructing special antennas that are very big and also extremely advanced – the most advanced phased array antennas in the world, we think. The antennas have to be very advanced because they have to pick up a very quiet signal from your cellphone… that signal needs to travel 500 miles and be caught by a satellite that is moving at 17,000 miles-per-hour and the satellite has to compensate for the Doppler effect of moving so fast, this is quite a difficult technical challenge. But we have it working in the lab and we hope it will work in the field. It’s quite a lot of extra hardware on the satellites and it’s also a lot of software – it’s a hard problem and that’s why it hasn’t been solved before.” (We will come to this later.)

So just how big are these Gen2 satellites (of which there would be about 30,000 once all are put into orbit under SpaceX’s current plans) and how big will the antennas need to be?

Musk said the new satellite’s body is about 7 metres long and the antennas, which will need to be loaded onto the satellite along with the other equipment (Ka-band and Ku-band and laser technology), will fold out once in orbit to be about 25 square metres in size. That size of satellite would be too big to be launched on the Falcon 9 rockets that SpaceX has so far used to put more than 3,000 satellites into orbit and will likely need the SpaceX Starship to handle the payload, but the Starship programme is currently running behind schedule. If delays persist, a smaller version of the Gen2 satellite may need to be developed that could be launched on the Falcon 9.

But Musk noted also that the messaging service doesn’t need the full constellation to be in place — in fact, an initial service could be offered once only a few of the Gen2 satellites are in orbit, because the initial messaging service is not real-time and synchronous.

“Because of the asynchronous nature of text and email, you can get service with only a few satellites in service,” but the service area covered by each satellite would still be very large and that would limit the time it would take for messages to be sent and any responses to be received, though Musk believes his satellites will be able to connect with devices that are on the move. “We’re confident it will work if you are walking, if the phone is in your pocket or even if you’re driving, [Each satellite] will enable 2-4 Mbit/s per cell zone,” which is quite limited and so therefore not in any way a substitute for regular terrestrial cell coverage. “This is meant to provide basic coverage to areas that are completely [lacking any coverage],” reiterated the SpaceX man. But it is still a “really big announcement” because in a nutshell it means “no more dead zones.”

And Sievert and Musk want other mobile operators to get involved and make this an international service that will enable roaming and offer remote coverage across multiple territories.

Sievert added: “We want this to work worldwide – this is an offer for reciprocal roaming with carriers worldwide. If they would like to do something similar, with mid-band spectrum dedicated to SpaceX’s Starlink constellation, we can offer reciprocal roaming. Our vision and our dream is ubiquitous global connectivity.”

But there’s a lot to do to get the service even to beta level. In addition to developing the satellites and the antenna technology and getting it all into space and working, there’s also work to be done on the messaging platforms side of things too, admitted the T-Mobile US CEO.

“We need to work with messaging technology platform partners to figure out how to separate messaging traffic from other data traffic. We have done this before with other initiatives, but we need help from partners… our opportunity over the next few months is to invite messaging app partners to participate,” noted Sievert, effectively calling out to Android, Apple and messaging application developers.

Other programmes are already up and running

Marrying the reach of satellites and terrestrial cellular networks isn’t something new, of course, and even turning regular, existing smartphone devices into satellite phones isn’t something that SpaceX and T-Mobile US are pioneering.

Omnispace has the same kind of approach and very recently announced a partnership with Smart Communications, the mobile operations of PLDT that covers 96% of the population across the Philippines with its 3G, 4G and 5G services – see Satellite firm’s 5G-based ‘one global network’ dream gets closer to reality.

And then there’s AST SpaceMobile, which has the backing of Vodafone, Rakuten, American Tower and others for its satellite-to-smartphone service – see A broadband satellite system built especially for mobiles.

Meanwhile, T-Mobile US is making its announcement in the wake of similar partnerships struck by its main domestic mobile rivals: Last year, AT&T forged a relationship with Starlink rival OneWeb with the aim of improving data connectivity for the US operator giant’s business customers in “remote and challenging geographic locations”, while Verizon announced a plan to extend its connectivity services to the harder-to-reach parts of the US by striking a partnership with Amazon’s planned Project Kuiper LEO satellite network.

By the end of 2023 we’ll know whether it’s possible to provide such ubiquitous service and whether other operators are interested in collaborating with each other to ensure that mobile phone users can get access to a service wherever they are in the world. But there are still a lot of technical, economic, regulatory and operational hurdles to overcome on the way, which makes all of these developments just so darned interesting!