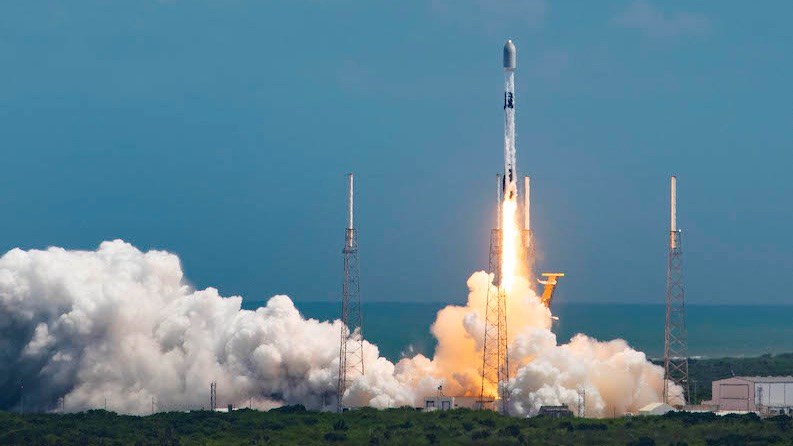 The Omnispace Spark-2 satellite launches into orbit, May 2022

If I had $10 for every press conference I have attended and every press release I have read about the imminent arrival of a system of satellite and wireless technologies that would enable instant global communications anywhere on planet Earth, I’d probably have enough to buy an entry-level Tesla. Unfortunately, though, I’m still stuck with the editorial Reliant Robin, a company-owned 748cc, two-and-a-half-door, three-wheel speedster that, strangely, turned out to be not quite the answer to urban mobility and keeping death off the roads.

That said, for 30 years and more now, I have made it a point of professional honour to follow the ups (and accompanying downs) of an incredible number of grandiose plans for satellite systems that would use mobile spectrum to provide telecoms coverage anywhere on earth. Some of them were basically mad, others science fiction, in that they were so enormous and enormously complex that the technologies required at the time they were mooted simply did not exist, and even if they had, they would have been too expensive to deploy and for anyone other than billionaires to use. Now, though, massive satellite-based comms systems are being flung into the heavens in their hundreds just about every week and, hopefully, some will become commercial successes.

Which brings us to Washington DC-headquartered Omnispace. The company, which was founded in 2012, claims it is “combining the global footprint of a non-geostationary satellite constellation with the mobile networks of the world’s leading telecom companies to bring an interoperable ‘one network’ connectivity to users and internet of things (IoT) devices anywhere on the globe”. It will also ‘leverage’ 5G to provide a worldwide mobile network with direct-to-device connectivity from a satellite constellation.

Omnispace launched its first vehicle, Omnispace Spark-1, in April this year and a second, the Omnispace Spark-2 (logically enough), followed in May. They are being used to “advance and validate” the further development and deployment of Omnispace’s global non-terrestrial network (NTN). The satellite system will comprise 200 low-Earth orbit (LEO) vehicles and 15 in middle-Earth orbit (MEO) that will operate in the standardised 3GPP band n256 that enables connectivity to worldwide consumer comms devices as well as to corporate and governmental IoT systems.

Omnispace’s business case is that it is not, repeat NOT, a satellite backhaul service for 5G, but rather a hybrid 5G satellite service that will exploit space technologies, virtual cloud layer technologies and terrestrial technologies. In essence, the network works along the lines of satellite radio, using terrestrial repeaters, satellites and comparatively inexpensive low-profile antennas to ensure that connectivity and coverage is continual. The question is – if LEO satellite systems really can deliver 5G anywhere, why haven’t other companies done it before now?

Omnispace CEO Ram Viswanathan points out that, in almost all cases, the traditional satellite sector has developed bespoke bandwidth and connectivity platforms and that has meant, because of the constraints of the design of the system, many players been driven to adopt a so-called bent-pipe solution that is best suited to backhaul services. Omnispace approached the challenge from another angle and looked from the very beginning at an integrated 5G network architecture that would allow multiple system components to work together seamlessly and transmit directly to a device.

Given that the Omnispace system will be global, the company is building relationships and partnering with telcos and service providers all over the world. The latest collaboration is with PLDT (once upon a time the Philippine Long Distance Telephone Company), one of two major service providers in the Philippines, the other being with Globe Telecom. The partnership is actually with PLDT’s wholly owned cellular subsidiary, Smart Communications, which serves 96% of the population of the Philippines with 3G, 4G and 5G network services.

Low-earth orbital space is now very crowded, and given the money-making potential of successful commercial systems it’s no wonder that so many organisations want a slice of the pie. If you’ll indulge the pun, that’s also true of the space that Omnispace longs to call its own. It has a rival in AST SpaceMobile: The Midland, Texas-based company is building a satellite-based mobile comms network that can be directly accessed by any standard, off-the-shelf smartphone but the downside is that it is based on proprietary, non-standardised technology. The company lofted its first satellite in March 2019, but since then all has not been plain sailing.

Only yesterday the company announced that the launch of its first operational satellite will be delayed by at least six months, to late next year, apparently as a result of supply-chain issues. To make things worse, the first five satellites of a planned constellation of 110 “Bluebird” satellites (originally due to be in place by 2024) will be half the size first planned. AST SpaceMobile says this is to get the system into commercial operation as soon as possible. Also, a potential problem is the sheer size of the phased array antennae that each satellite will have to unfurl on arrival in orbit: They are 64 square metre monsters. Meanwhile, AST SpaceMobile’s costs continue to mount. The company admits that the price per satellite has risen by more than 14% in recent months, to $16m a ‘bird’, as inflation bites and supply chain problems persist.

Rather defensively, the company insists that once the first five Bluebirds are in orbit, it will begin to generate revenues from “limited, non-continuous” service in countries it refuses to name. An earlier announcement stated that “substantial global coverage” would be available to customers by the end of 2024. To date, AST SpaceMobile has clocked-up net losses in the range of at least $70.5m to $80m – and that’s only until the end of 2021, the last period for which full figures are available. Interestingly, and perhaps presciently, AST SpaceMobile has referred to itself as "an early-stage company with a history of losses and may never become profitable”, although “it might break-even one day”.

They said it, not me.