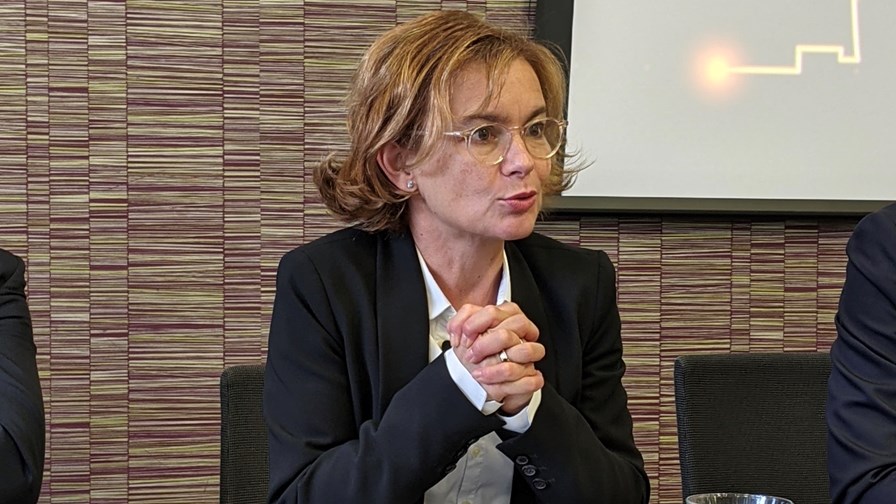 Orange deputy CEO Mari-Noëlle Jégo-Laveissière couldn’t be accused of resting on her laurels: Having brokered two significant M&A deals in the past year to further the operator’s strategic goal to convert customers to converged service offerings, she is now pushing for accelerated fibre broadband access network rollouts across the European footprint that comes under her remit to further advance the company’s convergence opportunities.

As deputy CEO, a post she has held since September 2020, Jégo-Laveissière, who has been with the company in various roles for more than 25 years, is responsible for Orange’s operational activities in Europe (outside France), encompassing seven markets (Belgium, Luxembourg, Moldova, Poland, Romania, Slovakia and Spain).

And while a lot of changing around her – Orange is due to announce a new CEO any day – in 2022 Jégo-Laveissière is retaining a strong focus on the convergence strategy the company highlighted as its cornerstone at an event in London last year by finding as many ways as possible to accelerate the operator’s FTTH coverage.

Talking to TelecomTV recently, the Orange executive reaffirmed converged service offerings (combinations of fixed broadband and mobile services) as a core part of the operator’s Engage 2025 strategy, which was first outlined in 2019. The service convergence approach aims to capitalise on the increased willingness of customers to commit to such subscriptions. In fact, she suggests Orange is seeing demand for converged services across all of its operating markets.

The strategy was put in place to also “protect our mobile customer base, especially in a country where we were mobile-only,” explained Jégo-Laveissière.

Orange has found that convergence reduces churn, as “loyalty of the customers is higher when they have a convergence offer and it increases the average revenue per user (ARPU).”

For example, company figures have shown the probability that a customer in Spain who is subscribed only to Orange’s fixed broadband (FBB) will churn away from the operator is almost three times higher than if they had a converged package with at least one mobile connection.

Globally, convergence decreases the churn for the company by between 1% and 10%, with Belgium highlighted as the strongest example for the tendency.

“This is really consistent with this value strategy that we have […] With this convergence offer, you can answer the need, deliver something which is easier for the customers, bringing quality of service and quality of experience with fibre, which was also one of our bets a couple of years ago which is now more global, but it was not the case at the very beginning,” Orange’s deputy chief noted.

Progress of the strategy

Jégo-Laveissière is bullish on the convergence push, but the operator’s latest figures suggest uptake is not going to happen quickly. At the end of the third quarter of 2021, the group had just 11.3 million convergent customers across all markets (with nearly half of those in France alone), compared with 10.9 million in the third quarter of 2020. Revenue from converged services was €1.9 billion, marking a 2.9% rise year-over-year. Orange doesn't have any stated target for the number of converged customers by 2025.

While Jégo-Laveissière is confident Orange is the number one player in converged services across Europe, she maintained the company needs to “stay in the race” because competition is moving fast.

Therefore, the operator has made a few big leaps towards its convergence ambitions in the past year, particularly in markets where it was providing mobile services only – namely Belgium and Romania.

Its most recent deal was the acquisition of a 75% stake (minus one share) in Belgian cable operator VOO for €1.35 billion. While the deal was secured on Christmas Eve, it’s still pending clearance by the European Commission, which Jégo-Laveissière hopes will be obtained by the year-end.

The deal will build upon Orange’s current mobile customer base of about 3 million customers in Belgium.

“Once we will have done that deal, it will also put us in a better situation to discuss about partnerships for people from the north and people from the south”, the executive added.

Jégo-Laveissière also highlighted progress made on the fixed services side in Romania by striking a deal to acquire a controlling stake in fixed operator Telekom Romania Communications (TKR).

In a market where Orange had a “strong” mobile delivery but a minor role in the fixed network domain, it has now has expanded the latter to approximately 5 million customers.

“Romania and Belgium were the two countries where the fixed path was poor compared to the competition and where we needed acceleration, so the acquisition of TKR is the solution for Orange Romania, even if there are still many things to do, because when you finally close [a deal] it’s just the start of a new story,” noted Jégo-Laveissière.

While in some markets the company focused on takeover moves, in others it bet on a different strategy.

“We did the FibreCo 50-50 with APG, which is a financial partner, in order to increase by 1.7 million the number of households” that could be connected by fibre, a move Jégo-Laveissière said represented a “clear acceleration” in Poland. (See Orange forms FTTH JV in Poland.)

“We are developing fibre on our own [in Poland] and we are moving forward through the FibreCo, which is absolutely very good to accelerate in the country”, she added.

Orange is also swapping cable for fibre in Moldova after buying a local cable operator in 2016, while Slovakia and Spain were highlighted by the executive as more advanced in terms of fibre deployment compared with the rest of its operations.

Shifting up a gear

The Orange executive is now dedicating her efforts towards finding ways to accelerate the convergence strategy in Europe.

“While discussing also with the investors and partners, we need to adjust the level of capex we’re using with the acceleration we are willing to see,” she noted.

“We need also to discuss, and to partner, with peers – and they can be competitors sometimes, but they can be partners as well – in order to see how we’re going to really move forward and make sure that we go as quickly as possible,” Jégo-Laveissière said, without identifying any potential partners.

Asked about any further M&A deals, the Orange deputy CEO said focus is on speeding the strategic plan across its current eight European markets, and this “has to be the key priority” for its staff in the shops, across marketing operations, among others. “We really need to make sure that all the companies fully align and deliver fibre as quick as possible,” Jégo-Laveissière emphasised, though she has said previously that acquisitions in new markets would not be ruled out if the right opportunity presented itself.

The focus isn’t just on consumers, though. Orange is also aiming to deliver fibre to business premises, especially in countries where it is not the incumbent operator and its market share is lower.

Convergence isn’t Jégo-Laveissière’s only strategic focus, of course. Along with its peers, Orange has sustainability targets to hit and the deputy CEO knows the operator needs to deploy cutting edge technologies that can deal with the never-ending growth in data and video traffic volumes while also reducing Orange’s environmental impact.

The company is placing efforts to achieve net zero carbon emissions by 2040, with some of its initiatives focused on reducing the energy consumption of its networks, optimising energy use in its buildings and transport systems, and promoting the circular economy in equipment, products and services.

In line with this vision, Jégo-Laveissière noted fibre consumes approximately 10 times less electricity than copper lines, while 5G deployments are 15-to-20 times more energy-efficient than 4G equivalents. She highlighted that a key priority for the company is to increase Orange’s sustainability by moving forward with the deployment of green network technologies, “in order to make sure that we can consume less and consume green”.

With so much on her plate, and a clear determination to see the convergence strategy further advanced, it’s just as well Jégo-Laveissière isn’t directly caught up in the CEO succession process: Three candidates were shortlisted to replace outgoing chief executive Stéphane Richard, of which only one was an internal candidate, current Orange Executive Director Finance, Performance and Development (CFO) Ramon Fernandez, but the smart money is on Christel Heydemann, currently Executive Vice President for Europe at energy management giant Schneider Electric, and a current member of the Orange board, to become the next CEO.

The appointment is imminent and will result in a spotlight on the CEO’s office at Orange for some time: In the meantime, Jégo-Laveissière will be looking even harder at the next steps to help Orange reach its convergence and sustainability goals.