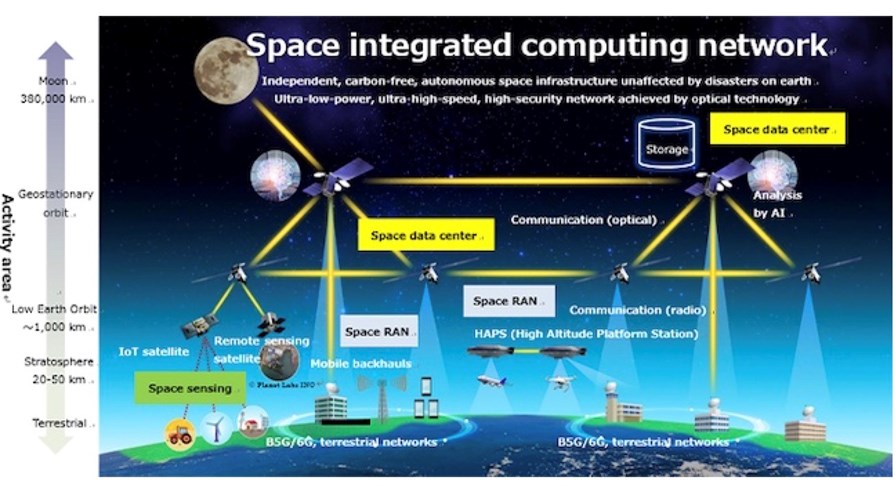 NTT and its mobile unit NTT DOCOMO have teamed up with Airbus and satellite network operator SKY Perfect JSAT to explore the potential of high-altitude platform stations (HAPS) that could be part of what the giant Japanese operator describes as “a future space-based wireless connectivity ecosystem.”

In this instance the HAPS element comes from Airbus, which has developed Zephyr, a solar-powered UAS (unmanned aerial system), the satellites come from SKY Perfect JSAT’s extensive fleet and the terrestrial elements are provided by NTT and DOCOMO. The connectivity provided by the satellites and the communications systems housed on the HAPS vehicles, which will fly in the stratosphere about 20km above the earth’s surface, is collectively referred to as Space RAN.

As ever, this is all very exploratory: The partners have pledged to “test HAPS connectivity, identify practical applications, develop required technologies and ultimately launch space-based wireless broadband services” that can help deliver connectivity to hard-to-reach places such as mountainous and remote rural areas, at sea and in the earth’s atmosphere (and space!).

Among the test plans the partners have in mind are “base station backhaul, the performance of various frequency bands in HAPS systems, the technological considerations for linking HAPS with satellites and ground base stations, and the establishment of a cooperative system to test a network combining NTN technology, satellites and HAPS.” You can find out more about the partners’ plans in this NTT announcement.

NTT DOCOMO and Airbus have previously announced successful tests using the Zephyr platform: Those tests showed that 2GHz spectrum is well-suited to HAPS-based services and that the use of a narrow 450MHz band to provide connectivity resulted in a viable range of ups to 140 kilometres for data connectivity between a Zephyr and terrestrial devices. (See Project Kuiper LEO constellation to expand to 7,774 satellites as Zephyr goes for a handful of stratospheric UAVs.)

The partners very much have their eyes on the future: NTT sees such developments as an important part of ongoing 5G service development and also as part of the 6G future. And it’s not alone in considering the role of Space RAN networks in providing the next wave of connectivity-based services, as another Japanese giant, SoftBank, has previously highlighted its R&D work with HAPS as part of its early 6G developments. (See SoftBank outlines 12 challenges for 6G.)

Not everyone is convinced about the long-term potential of HAPS, of course. Facebook dabbled with HAPS for four years under a development called Aquila, but that was axed in 2018. (See Back down to Earth: Facebook grounds its Aquila broadband project.)

And Google’s parent Alphabet spent years and a great deal of money on its Loon project, which explored the potential of providing data connectivity from a fleet of helium balloons floating in the stratosphere, but that development was brought back down to earth in January 2021, but not before SoftBank had invested $125 million to be a partner on the Loon development. (See Loon falls back to earth with a bump.)

SoftBank clearly still believes in the potential, of course, and duly acquired about 200 HAPS patents from Loon in September last year. The Japanese company said at the time: “With these patents, SoftBank and its subsidiary HAPSMobile Inc. will collectively own approximately 500 HAPS-related patents, including patents pending, further establishing their position as intellectual property (IP) leaders in the HAPS industry. The patents are related to network technologies, services, operations and aircraft for HAPS.”

It's also worth noting that yet another major Japanese mobile operator, KDDI, is a member of the HAPS Alliance, alongside Airbus, NTT DOCOMO and SoftBank. It looks like Japan is all in on the potential of Space RAN...

Alaian is born, a global alliance for innovation