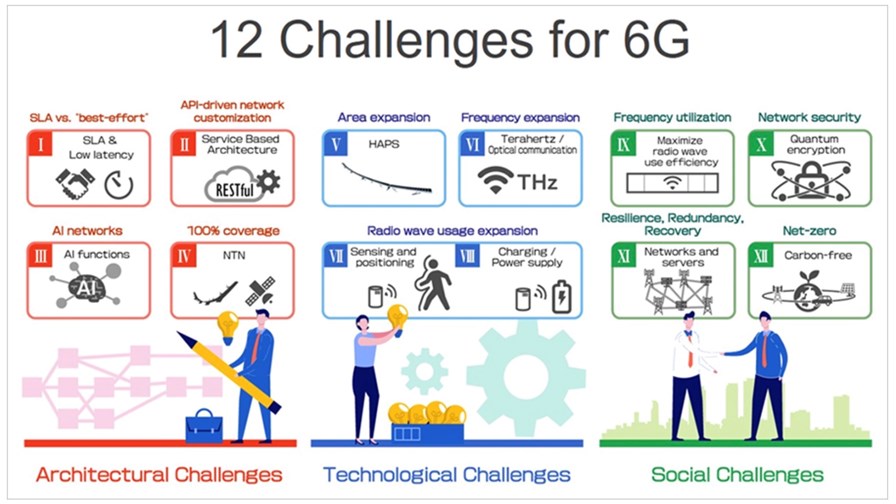 After four years of examining the concept and potential of 6G, the research and development team at Japanese operator SoftBank has identified a number of options for the next generation of mobile broadband connectivity and a dozen key challenges facing the industry as it looks ‘Beyond 5G’.

SoftBank notes that in addition to enhancing the high-speed connections, low latency and “massive device connectivity” capabilities expected during the 5G era, 6G needs to enable high reliability and much-improved energy efficiency, and so has been exploring some of the architectural options for 6G (such as non-terrestrial network solutions and Terahertz connectivity) says it started looking at some of the architectural options for 6G as far back as 2017, with a particular focus on High Altitude Platform Stations (HAPS) and THz communications.

And the ultimate vision is for Japan to become an AI-driven digital society. “The Internet will be utilized to build a virtual digital space, with mobile networks connecting base stations and devices,” noted Ryuji Wakikawa, Head of the Advanced Technology Division at SoftBank. “In this way, digital and physical spaces will be connected in real time. What is predicted and judged in the virtual space using AI will be fed back to the physical space with ultra-low latency. Not only will 6G networks serve as communication networks; they will also evolve into computers that support an AI society. Edge computers will be deployed everywhere in Japan, and these computers will be capable of AI and other types of server processing to disperse computing. These computers will establish a high-quality, end-to-end communications environment connected to networks in highly sophisticated ways. If AI is the trigger for the next Industrial Revolution, 6G will be the telecommunications infrastructure that makes it happen.”

That’s the theory, and to make it a reality SoftBank is “taking up the challenge of resolving numerous issues in different areas,” with the operator, which plans to invest 2.2 trillion yen (US$20.13 billion) during the next 10 years on its 5G and 6G networks, pinpointing a dozen main challenges.

Those challenges are architectural, technological, and social, as the SoftBank team points out in the graphic above and in the following explanations:

Until now, services provided on mobile networks that connect smartphones to the Internet have been on a “best-effort” basis because of the nature of the Internet protocol (IP). For example, small network delays or packet loss were unlikely to inconvenience people's daily lives such as online shopping and video streaming. In the future, however, 6G mobile networks will underpin network infrastructure that supports a variety of industries. SoftBank will accommodate complete end-to-end communication for customers with appropriate Service Level Agreements (SLA) in its network by leveraging Mobile Edge Computing (MEC) and network slicing.

There is no doubt that the Internet has continued to evolve systems and protocols because of its openness. On the other hand, the evolution of mobile networks was limited due to proprietary technologies and a closed culture for a long time. For mobile networks to be a fundamental infrastructure for various industries, they need to be capable of supporting customization and dynamic configuration on the fly. SoftBank will provide more convenient services for customers by incorporating RESTful (Representational State Transfer) application programming interfaces (APIs) to customize and configure its network for customer needs.

AI technologies are now applied to more areas than before, including for the detection of objects using image-recognition technologies, voice recognition/translation, and network optimization/automation operations. However, AI engines require a lot of data and computational resources. The AI engines could be deployed over networks with various rich data handling and unlimited computational resources, instead of having them in devices. To maximize the power of network-based AI, high-speed and low-latency networks are required. By distributing GPUs as well as servers across mobile networks, it will be possible to provide low-cost, high-quality networks and AI services. These GPU resources could also be used to automate SoftBank's network operations with AI intelligence as well. SoftBank has been conducting technological verifications of virtual base stations equipped with GPUs since 2019. SoftBank's network will be adjusted to network traffic patterns, customer behaviour and network demands automatically by AI.

6G networks will require the elimination of dead spots where people live and total coverage around the globe. SoftBank aims to solve these challenges by offering Non-Terrestrial Network (NTN) solutions that utilize HAPS and Low Earth Orbit (LEO) and Geosynchronous Earth Orbiting (GEO) satellites. This will enable SoftBank to offer Internet services to more than three billion people around the world who are currently unable to access the Internet. It will also allow mobile network access at sea, in mountainous areas and the upper atmosphere, where the installation of base stations has been impossible to date. As the underlying infrastructure, 6G networks will pave the way for new industries that enable autonomous driving, flying taxis and drone-based delivery services, among others.

HAPSMobile Inc., a subsidiary of SoftBank, has been developing stratospheric telecommunication platform systems since 2017. In 2020, the company successfully demonstrated a stratospheric flight and long-term evolution (LTE) communications from the stratosphere in New Mexico, USA. “Sunglider,” an unmanned aircraft system equipped with solar panels, was used as the stratospheric communications platform for the test. The successfully test proved the feasibility of SoftBank's High Altitude Platform Station (HAPS) technology. Utilizing the large amount of data obtained from the test flight, SoftBank is developing aircraft systems and wireless equipment with a view to commercialization and preparing to meet regulatory requirements.

6: Beyond millimetre-wave: terahertz and optical communication

Mobile operators have utilized radio spectrum just for telecommunications purposes until now. However, 6G can be used not only for communication but also for sensing and positioning simultaneously. For example, a technology using Wi-Fi to identify the location of a person indoors is already in practical use. In addition, Bluetooth® is now being used to track positional data. In the coming 6G era, in addition to communications, SoftBank will look to offer communication, sensing and tracking services with its base stations.

For devices such as smartphones, Qi-standard contactless charging technologies are widely used. However, this method has a drawback, which is its inability to charge or supply power when the device is placed even a short distance from the charger or power source. 6G will drastically change ways of charging batteries and daily charging routines. To realize that future, SoftBank's R&D efforts will focus on wireless charging/power-supply technologies for battery-powered devices such as IoT sensors, smart meters, audio headset, mouse and keyboards.

Until now, frequencies have been allocated based on the purposes of the applications that each service provider used them exclusively. However, by applying Internet protocol (IP) technologies to wireless zones, multiple providers should be able to share bandwidths available at certain times and in certain places. Multiplexing technologies, including massive multiple input/multiple output (MIMO) and dynamic spectrum sharing (DSS), are already established. By further advancing these technologies and others, our aim is to utilize frequencies more effectively.

As their development gathers momentum, it is said that quantum computers may enter practical use by 2030. When this happens, it will become possible to decipher the RSA codes*1 currently used for Internet encryption, which could make networks vulnerable to communication content theft. In order to protect all businesses built on communications infrastructure, SoftBank is working on the technological verification of various systems, such as post-quantum cryptography (PQC) and quantum key distribution (QKD). By advancing these technologies, our aim is to build ultra-safe networks.

With the rollout of 5G, mobile networks will play an ever-increasing role in network infrastructure. Accordingly, networks need to continue to function, even under circumstances where a communications failure occurs. To this end, SoftBank is reviewing traditional network architectures and working to build fault-resistant networks. At the same time SoftBank is developing technologies that will enable networks to maintain services during anytime a failure occurs.

Large-volume data obtained from sensors and devices, as well as data processing by all types of computers, will enable the 24/7 monitoring and observation of CO2 emissions. This will make a significant contribution to achieving net-zero greenhouse gas emissions. On the other hand, constant monitoring using sensors could raise privacy issues that need to be solved, including the handling of personal information and data security. In parallel, SoftBank is aiming to achieve carbon-neutral operation of base stations. At present, laws require the installation of batteries for emergency power supply at base stations to sustain network services at the time of a disaster. It is possible to curb greenhouse gas emissions by utilizing these batteries on a routine basis, as well as by operating the base stations at night using electricity that was generated and stored during daytime hours. Furthermore, by controlling the operation of base stations in real time in accordance with communications volume, power consumption can be minimized. SoftBank is carrying out R&D to realize carbon-free base stations.

And to get the ball rolling, SoftBank has kickstarted two initiatives, one focused on using THz spectrum for mobile communications (as well as fixed wireless connectivity), and one focused on the use of HAPS to help enable the operator’s 6G vision (which includes the development of new antenna and connector technologies).

SoftBank’s 6G vision has much in common with work underway elsewhere, for example at the Next Generation Mobile Network (NGMN) Alliance, which has made 6G research a key part of its new strategy, and at ETSI, which has had 6G in its sights for a while. (See What is 6G? The NGMN Alliance offers some foundational ideas.)

And international cooperation will, of course, play a role in the ongoing developments: For example, SoftBank is just one of a host of major technology and communications industry names that are part of Japan’s Beyond 5G promotion Consortium, which is to collaborate with Finland’s 6G Flagship ecosystem. Japan has also struck a beyond 5G agreement with the US.