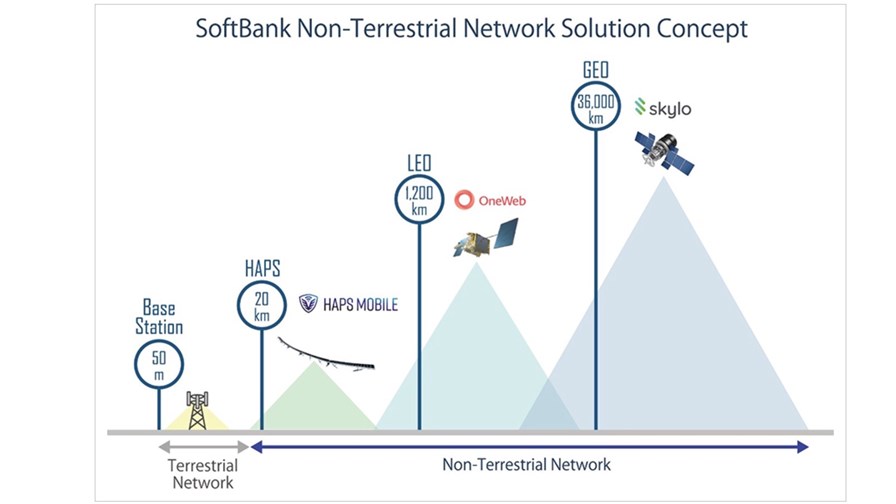 SoftBank is planning a big push for what it calls its “Non-Terrestrial Network (NTN) solutions that provide connectivity from space and the stratosphere.” These include: The Geosynchronous Earth Orbiting (GEO) satellite NarrowBand IoT (NB-IoT) services provided by Skylo Technologies, which recently agreed to partner with SoftBank to provide satellite connectivity services in Japan. Low Earth Orbit (LEO) satellite communications to be provided by OneWeb, which emerged from bankruptcy protection with new investors last year; and High Altitude Platform Station (HAPS)-based stratospheric telecommunication platforms to be provided by SoftBank subsidiary HAPSMobile. Read more.

Still high above terra firma… ViaSat says the first satellite in its ViaSat-3 constellation, which will aim to offer Internet connectivity to anywhere on earth from one of three satellites, has completed its integration and performance testing phase and is now set for “environmental testing to simulate the rigors of launch and operation in the harsh environment of space.” This first of three satellites, which will cover the Americas and surrounding oceans, is due to launch early next year and will be followed by the ‘birds’ that will provide service to the EMEA and APAC regions. See this announcement for further details.

No sustainability stone left unturned: Virgin Media O2, the newly conjoined UK CSP, has turned its attention to finding ways to make the conventional low-tech dig and hide approach to building out fibre networks more sustainable. The best solution is to not dig them in at all, of course, and to that end the company has installed new cables in existing underground ducts and used Openreach’s overhead telegraph poles to avoid getting out the digger. But it’s also backed a trial by planning and design specialists, C-Plan, to use recycled stone and sand when reinstating the ground after laying fibre cables in two Glasgow streets. It says the usual approach is to source aggregate from quarries, but by recycling used aggregate instead of crushing and sifting new material, it calculated it could save 450 tonnes of carbon emissions per year on its Project Lightning network expansion programme.

Australian operator Vocus, which provides enterprise and wholesale services using its 30,000 kms-long transport network, is to source multiple fibre and connectivity products from STL. “We are excited to partner with Vocus for the expansion of their fibre network that will connect millions across Australia,” noted Ankit Agarwal, CEO - Connectivity Solutions Business, at STL.

Samsung has unveiled its newest radio frequency (RF) technology based on 8-nanometer (nm) process, which is set to “provide a ‘one chip solution,’ specifically for 5G communications with support for multi-channel and multi-antenna chip designs.” The vendor believes its 8nm RF platform extension will “expand the company’s leadership in the 5G semiconductor market from sub-6GHz to mmWave applications… The company has established its RF market leadership through the shipping of more than 500 million mobile RF chips for premium smartphones since 2017.” Read more.

UK adults spent more time online on desktop, smartphones or tablets in 2020 than comparable European countries, according to an annual study into the nation’s online habits by regulator Ofcom. According to the findings published in Ofcom’s Online Nation 2021, UK adults spent more than three-and-a-half hours (217 minutes) online each day in 2020 – more than an hour longer than in Germany and France and 30 minutes more than Spain. Read more.

The 5G Infrastructure Association (5GIA), the ‘private’ side of Europe’s 5G PPP (5G Infrastructure Public Private Partnership), has published a white paper, titled European Vision for the 6G Network Ecosystem, that covers “key areas related to 6G research from a technical, societal, policy and business perspective providing a vision for the future networks and services.” The 5GIA says the paper “explains how 6G is expected to play a key role in the evolution of the society towards the 2030’s, as the convergence between the digital, physical and personal worlds will increasingly become a reality. Furthermore, 6G will support the European Green Deal’s objective of reaching climate neutrality for Europe by 2050. This and other objectives of 6G will also greatly contribute to the United Nations Sustainable Development Goals.” The 5GIA’s membership includes Ericsson, Nokia, Orange, Samsung’s UK R&D Institute, Telenor, Thales, TIM, and multiple other organizations. The white paper was released just as Finland’s 6G Flagship ecosystem struck a 6G R&D agreement with Japan’s Beyond 5G Promotion Consortium. Read more.

SD-WAN and SASE (Secure Access Service Edge) services specialist Aryaka Networks has opened a new services point of presence (PoP) in Dublin, and plans to add services PoPs in Paris and Moscow before the end of this year. Read more.