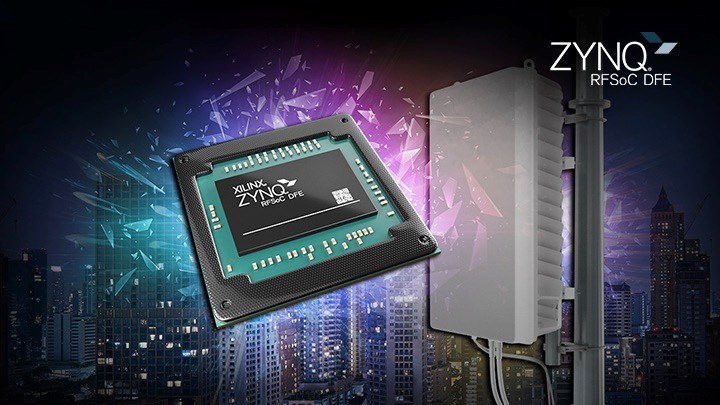 The unveiling of the new product, which looks set to meet the needs of radio access network systems vendors and mobile operators alike as they advance their 5G strategies, came as computing device and server chip giant AMD confirmed plans to acquire Xilinx in an all-stock deal valued at $35 billion: News of the planned takeover had leaked earlier this month.

The Zynq RFSoC DFE, the company’s fourth generation of 5G radio products, differs from previous generations in that it is not predominantly programmable – most of the functionality in the new product is ‘baked in’ (or ‘hardened’), a move that Xilinx says will help reduce power consumption, enhance performance (twice the performance per watt compared with the third generation product), and improve cost efficiencies while still retaining enough adaptability for users to evolve their networks as new standards and specifications (3GPP Release 16 and 17 and O-RAN) come to market.

“With Release 16 of the 3GPP becoming certified this year, and with Release 17, which has been pushed out a little bit but which is still coming in 2022, and with all the RFQs and RFIs we have received from operators in the past nine months, we wanted to be able to [meet] those new requirements,” including those related to law latency and massive IoT use cases, noted Gilles Garcia, Wired and Wireless Business Lead Senior Director at Xilinx.

He says the new product’s expanded range will enable operators to offer services over a broader range of frequencies, including unlicensed bands up to 7.125 GHz and mmWave at 50-54 GHz, and enable multi-mode and multi-band configurations: “We are helping people to grab them,” says Garcia, and be able to adapt to new bands as they are released.

And with Release 17 there will be even more features, including even 5G satellite communications that networks will need to be able to address. “And when you add Open RAN specifications on top of 3GPP specs, then things are becoming very fragmented, with a multitude of radio configurations,” notes Garcia, who says that adding in the needs of emerging private network rollouts only adds to that fragmentation.

The new product can adapt to these configurations, he claims. “By hardening the IPs that we have previously been running in the programmable logic, we have been able to reach 400 MHz instantaneous bandwidth configurations within the radio” for carrier aggregation, which is being used more and more by operators, while also enabling RAN sharing, which will become increasingly popular (where allowed) as operators seek to reduce their capex and share more passive facilities and active elements.

But while some functionality is hardened, Xilinx is still enabling programmability, should customers want it. “We have kept the adaptable logic to let customers to do their own magic – the beauty of that is, we are giving access to each entry and exit of every block” in the chip, allowing customers to bypass or amend as they wish, says Garcia. 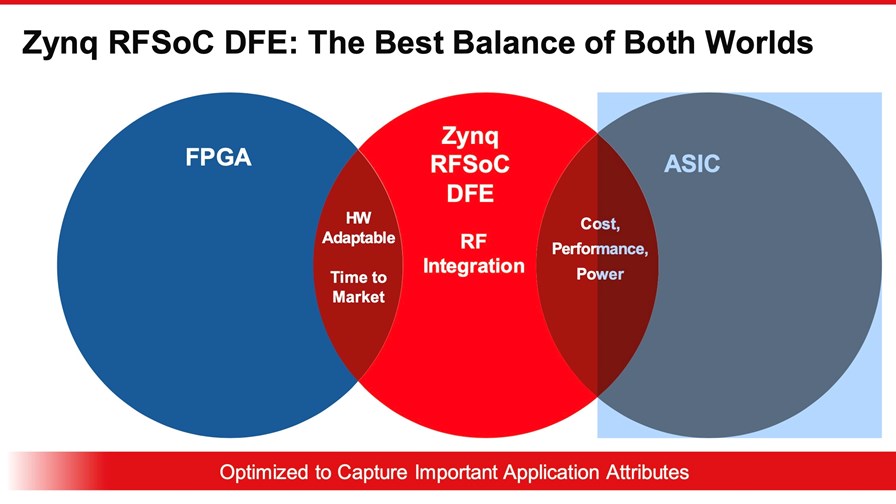 All of which plays into the growing desire for flexibility in the mobile networking market, where Open RAN in particular is a very hot topic, and a market where Xilinx has already made a move with its September announcement of an accelerator card designed to improve the performance of Open RAN distributed units (DUs).

So it sounds like Xilinx is hitting a lot of buttons as 5G evolves from its basic starting point of simply enabling faster mobile broadband.

And it’s a big enough step forward to be noteworthy, says Gabriel Brown, Principal Analyst at Heavy Reading, who believes the component specialist is “in the groove and hitting its stride” with its fourth generation product.

“Xilinx has such close contact with the OEMs, the operators and other component companies that they get the market requirements years ahead of market needs,” notes the analyst. “With this product there is a bit of a trade-off, with more processing power [as a result of the hardened IP] but still enough flexibility to account for the needs of R16, R17 and O-RAN, and with the product set to ship in the first half of 2021 it looks like it’ll be ready for the C-band deployments in the US market – that’s good timing for a massive investment cycle,” says Brown.

But of course Xilinx isn’t alone in this market, even though it looks to be well advanced in its feature set for the next big 5G network infrastructure investment wave: The likes of Intel, Broadcom, Marvell and Analog Devices are all chasing the same business, and Qualcomm has just announced its entry into the 5G infrastructure chip sector, with its products set to become available in early 2022.