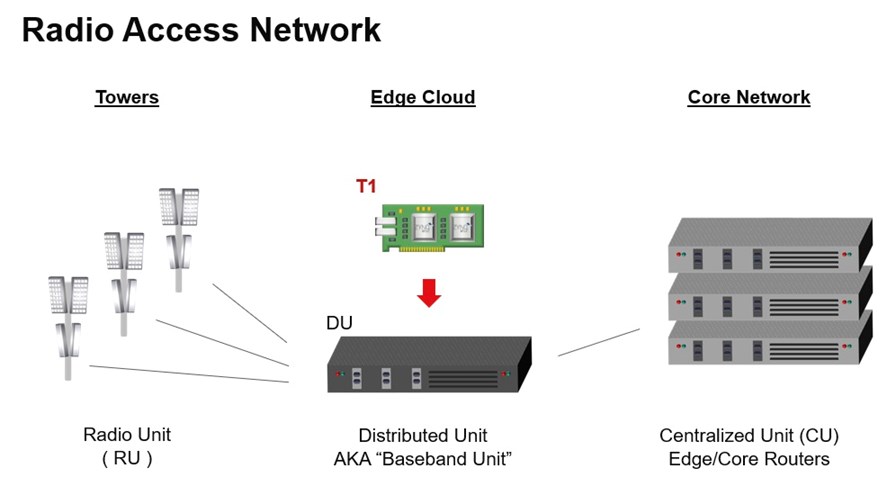 Xilinx, a highly-respected and successful supplier of traditional radio access network (RAN) hardware components, has thrown its hat into the Open RAN ring with the launch of a product designed to dramatically improve the performance of a key element in the Open RAN architecture.

The company has unveiled the T1 Telco Accelerator Card, which has been designed to improve the performance of distributed units (DUs) in Open RAN deployments and virtual baseband units (vBBUs) in 5G networks: It has been built using the same silicon that Xilinx uses for traditional 5G components supplied to major traditional RAN system vendors.

The product development tackles one of the key challenges for the Open RAN tech development market: How to ensure that Open RAN deployments can scale up to deal with high-density traffic loads while retaining power, space and processing efficiencies. Key to achieving that is to improve the performance of the DU, the server-based baseband unit that performs intensive layer 1 protocol processing.

In a nutshell, Xilinx is saying that its single-slot T1 FPGA (field programmable gate array) card can plug into a standard server and perform fronthaul and layer 1 offload tasks that would normally require multiple standard x86 processors. The Xilinx pitch is that by plugging in its card, a network operator could either use far fewer x86-based servers in its deployment or free up CPU cores for running other services. (See diagram above.)

It claims its T1 card can offload compute-intensive functions such as “channel encoding/decoding using hardened LDPC and Turbo codecs, rate matching/de-matching, HARQ buffer management.” And its efficiency claims are not shabby: “The offloading of critical channel coding functions from the CPU to the T1 card delivers up to 45x encoding and 23x decoding throughput improvement relative to the same server without acceleration. The T1 card enables the use of fewer CPU cores, driving down system cost and overall power consumption.” (See the full press release for further details.)

Of course it should be noted that these are the vendor’s own statistics – based on tests using a Dell R740 server with and without a T1 card – and not those of an independent test lab, but Open RAN solution vendors, system integrators and network operators would soon call out Xilinx if those numbers are not in line with reality.

“The integration of radio functions into commercial silicon will have a big influence on Open RAN momentum as we go into 2021,” notes Gabriel Brown, Principal Analyst at Heavy Reading, who has long monitored developments in mobile network infrastructure. “Silicon products optimized to run independent radio processing software will be a great enabler for system level development, and in turn, for innovation in software at the higher layers of Open RAN.”

And Brown believes the introduction of specific hardware modules for Open RAN architectures will help boost the capabilities of these alternative, disaggregated systems. “For those who think open RAN is primarily about virtualized baseband running on CPUs, the focus on silicon is a little counter-intuitive, but CPUs don’t perform well for Layer 1 functions such as encoding/decoding and it is widely agreed you need hardware acceleration alongside CPU to create a competitive system.”

The analyst also believes that the introduction of such technology from an established name will be a boon to the Open RAN community. “Xilinx is very well regarded in RAN silicon – particularly in the radio unit – and is a major supplier to large OEMs. This new product line, targeting CPRI interfaces [for fronthaul] and baseband, will be offered to large and small open RAN players, and will help to level the playing field a little.”

And there appears to be interested from companies of all shapes and sizes: The Xilinx press release cites support from Mavenir, one of Open RAN’s primary flag wavers, as well as Nokia, which has been wearing an Open RAN badge and pledging support for disaggregated network strategies for some time, a position that sets it apart from its main global traditional RAN rivals, Ericsson and Huawei.

Gilles Garcia, Wired and Wireless Business Lead Senior Director at Xilinx, is pumped about the possibilities, particularly if some of the market projections for Open RAN investments (up to $30 billion per year by 2030, according to ABI Research) come through. (See Why Open RAN is just too hot to ignore.)

He says Xilinx has already shipped more than 60 cards to virtual RAN software developers (the likes of Mavenir), hardware OEMs, Open RAN vendors developing specific DU platforms and Tier 1 operators. Garcia didn’t mention any names, but Xilinx was namechecked by Telefónica as a strategic ecosystem collaborator for its Open RAN developments in March this year.

By that time the company had long been a member of the O-RAN Alliance, the industry body that is developing specifications for the Open RAN community, but in July it also joined the Open RAN Policy Coalition, clearly signalling its intent to play a role in what is now one of the most contentious sectors in the mobile infrastructure market. (See Ericsson crashes Open RAN party with security scare.)

So this all seems quite positive for the Open RAN community, but FPGA-based components do not come cheap. Garcia did not want to talk about pricing of the T1 card but pointed to the overall potential reduction in TCO (total cost of ownership) of an Open RAN deployment that the deployment of the card would bring.

And what about competition? Xilinx, of course, says it first to market with such an accelerator, which it appears to be: Garcia notes that Nvidia (which acquired Mellanox) could also look at such a development, though it is more focused on data centre rather than networking deployments; the other main player here could be Intel, but any such development would only cannibalize its x86 sales, so that would be a tricky call for Intel.

More likely, perhaps, will be a challenge from Taiwan, home to many IT hardware platform developer, but they wouldn't carry such a respected name and any such challenge might be some time in coming.