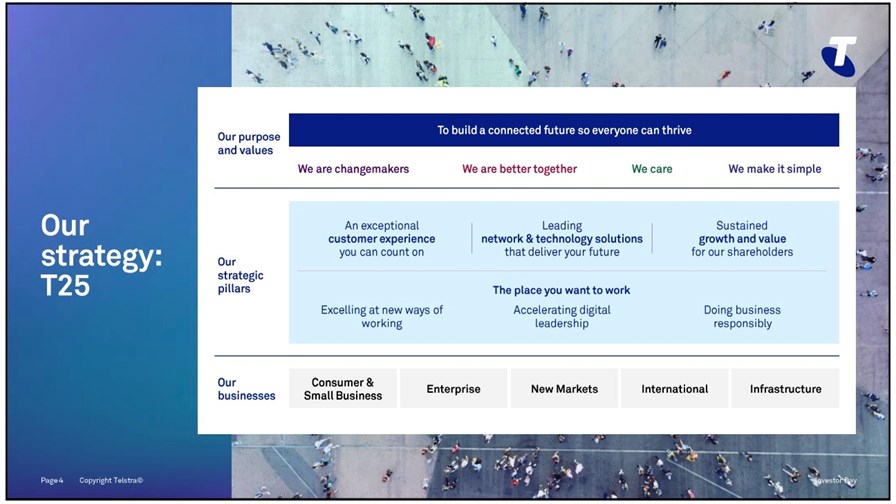 Telstra has laid out its plans for the coming years with the unveiling of its T25 strategy that has near ubiquitous nationwide 5G coverage and customer experience (something for which the operator has not been historically renowned) as key areas of focus.

The plan, which comes into effect in July next year, will build on the changes made under the T22 strategy, much of which was focused on implementing a digital services portfolio and simplifying the operations and structure of the Australian operator, and which lead to the creation of separate network units and the sale of a 49% stake in the carrier’s towers unit for A$2.8 billion. (See Telstra, Telia become the latest telcos to cash in on towers.)

“T22 has been one of the largest, fastest and most ambitious transformations of a telco globally and today we are a vastly different company,” stated Telstra CEO Andrew Penn. “This means we are poised for growth as our society and economy increasingly digitises and we all work, study, transact and get our entertainment online. These fundamental shifts, together with T25, will underpin our future growth and shareholder value. If T22 was a strategy of necessity, T25 is a strategy for growth,” added Penn.

The T25 plan does, though, include further restructuring and efficiency drives: Penn aims to slash another A$500 million (US$366 million) from the operator’s annual fixed costs on top of the $2.7 billion targeted for the T22 programme.

But, as hinted at previously, Telstra is also looking to deliver a broader range of services that build on its customer relationships, which it is has been strengthening through a loyalty programme called Telstra Plus that already boasts 3.5 million members (the T25 target is 6 million): Late last year, Penn stated that the operator was exploring opportunities to re-sell renewable energy to its consumer customers, and it looks like that will play a role in T25.

Consumer and small business customers are to be targeted with “exceptional customer experiences as telco, energy and tech products and services are personalised and localised for individual customers using predictive analysis.” To achieve that, the operator will use “technology, AI and analytics to provide customers a more personalised experience with products and services, and to predict and resolve issues before customers know they are happening.”

That effort will be “supported by one of the country’s largest retail footprints, Australia-based contact centres and a 24/7 digital shop, delivered on Australia’s biggest and best mobile network – including the leading 5G network,” the operator notes in its T25 announcement.

And that 5G network, which currently reaches about 75% of the population, is going to be pushed further. The operator noted: “Our customers will keep enjoying our investment in 5G, which will deliver approximately 95 per cent population coverage, including a 100,000 sq km increase in our 4G and 5G network footprint, substantially increasing regional coverage. Over the next 3-5 years this will be supported by our continued 5G network roll-out and the doubling of metro cells to increase density for greater capacity and speed. As a result, we expect 80 per cent of all mobile traffic to be on 5G by FY25. We will have extended our 4G coverage to 100 per cent of our network by FY24 enabling us to continue to lead in composite coverage, speed, and performance for 4G and 5G as we close 3G. This will set us up well for early planning on 6G which will clearly be on the agenda by the end of T25.”

For more on Telstra’s T25 strategy, see this announcement.