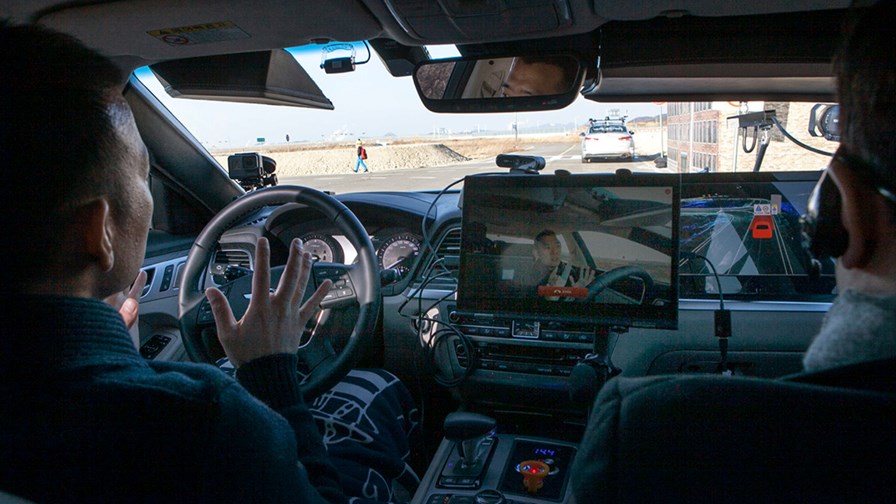 SK Telecom and the Korean Transportation Safety Authority (TS) have announced that two 5G self-driving cars successfully ran what they call “cooperative driving,” where traffic information was shared between the two vehicles. The test, using actual vehicles and equipment from Samsung, was held in K-City, Korea’s pilot city for autonomous driving located in Hwaseong.

SK Telecom and its partners deployed a 5G network using the 28GHz frequency band throughout K-City, covering an area of 360,000 square metres, last December. Traffic related infrastructure such as CCTVs, traffic lights have been linked to self-driving cars and control centres via 5G radio. For this demonstration, two 5G network connected autonomous cars were used – jointly developed by SK Telecom and TS.

During the driving trial, the two vehicles used 5G vehicle-to-everything (V2X) technology, a 3D HD map, and deep learning-based decision-making technology to communicate with each other and to share traffic information with the control centre and traffic lights. The telco reports that the vehicles safely completed driving on K-City’s 2km track, which included a simulated school zone, crossroads and a highway.

SK Telecom says this is the first time that multiple number of 5G self-driving cars ran in coordination while monitoring each other’s route and road safety. It adds that starting in 2019, the company will introduce its self-driving technology on the nation’s main highways, utilizing its 5G network. Yes, that’s early, but this is Korea and their appetite for 5G innovation is second to none.

When the autonomous vehicles perceived a school zone area, they automatically slowed down. When a life-size model of a child appeared on the road, a CCTV camera positioned on a streetlight immediately sent a message over 5G to the nearest self-driving vehicle. Upon receiving the message, the vehicle instantly stopped and started driving only after it was confirmed that the model was no longer on the road. The telco says this test demonstrated that 5G technology’s ultra-low-latency of less than 1ms of response time can help prevent traffic accidents.

A similar scenario occurred with roadworks. When the vehicles received information from the control centre on highway construction work they reset their driving route. They also automatically increased their speed to 60km/h when they entered the highway. Testing the scenario of multiple vehicle collisions, the preceding vehicle sent an instant report of the accident via 5G to the car behind and to the control centre, allowing the following car behind to decrease its speed, change its lane and safely drive past the accident scene.

So far so good. A further scenario had the two cars arrive simultaneously at a crossroads with no traffic sign. They communicated both between themselves and with the control centre to decide which one to first pass through the area. On average, each self-driving car communicated more than 100 times a second using 5G with the control centre and the another vehicle to minimise the risk of accidents on the road.

An HD map was used for the test that precisely depicted nearby traffic signs and lights, and information on K-City’s driving lanes down to a 1cm accuracy. When the self-driving cars were on the move, various driving information – including nearby vehicle’s real-time location, traffic light signal and traffic information, highway construction, and the multiple collision incident – was reflected on the HD map on a real-time basis. The autonomous car could then make decisions while driving based on various information it had received from the HD map.

“We will continuously enhance our 5G prowess such as V2X and 3D HD map by taking advantage of the stability of our 5G network,” said Suh Sung-won, President of MNO Business of SK Telecom. “Through our 5G technology, we will continue to contribute to the society by leading the era of safe self-driving.”

The telco said use of 5G V2X and the 3D HD map can reduce self-driving car’s accidents even in bad weather conditions and at night when camera and sensor technologies might not function properly. Not content with this week’s demo, SK Telecom says it will soon deploy its quantum technology-based security module on autonomous vehicles, to prevent external attempts to hack communications between self-driving cars and the control centre or IoT devices.

The next wave of 5G to arrive early for Telstra customers