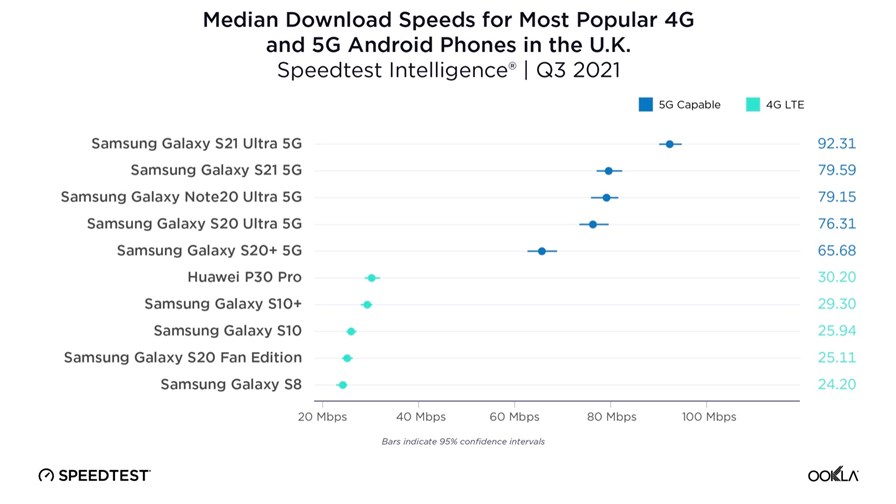 Ookla will be attracting a lot of eyeballs today for two reasons: A very interesting, multi-country comparative analysis of 4G and 5G download speeds; and its acquisition of RootMetrics from IHS Markit for an undisclosed sum.

The comparisons are all available to see in this lengthy and detailed blog, which I would say is well worth a look because, well, it’s just interesting!

Now, obviously, the analysis is based on one criterion.... median download speeds on the most popular 4G and 5G devices in each of the 12 markets analysed (from Australia to the UK and US) during the third quarter of this year. And, of course, download speed isn’t the be-all and end-all for some people, for sure.

Because I am based in the UK I have shown, above, the chart for my home country, but it’s interesting in itself because of the analysis by the Ookla team: “Consumers upgrading from one of the most popular 4G devices in the United Kingdom to one of the most popular 5G-capable devices would have seen a 2-3X increase in median download speed during Q3 2021. This is in part because the 4G devices on this list were slower in the U.K. than elsewhere in the world during Q3 2021 as 4G speeds have stagnated in the U.K. For example, the Samsung Galaxy S8 showed a median download speed of 24.20 Mbps in the U.K., 37.67 Mbps in France and 46.31 Mbps in Canada. All five of the 5G-capable devices that we analyzed in both the U.S. and the U.K. were faster in the U.K. during Q3 2021.”

I love some statistical analysis!

There’s plenty more to explore in the blog, as mentioned. And, of course, the stats come from Ookla’s Speedtest platform, which uses crowdsourced data from devices to determine average metrics.

Now it is spreading its test and analytics wings by acquiring RootMetrics, which as well as gathering some data from crowdsourcing techniques, also gathers data using drive and walk testing, so on-the-ground in situ data gathering, that replicates regular users.

“The wealth of combined network intelligence generated from Ookla and RootMetrics measurement solutions will provide more opportunities for telcos to understand, market, and optimize their network deployments,” noted Ookla.

The RootMetrics acquisition adds to the purchase of Solutelia, and its WINd test platform, earlier this year.