Huawei and Turkcell collaborate on TechCity 2.0 to launch ‘Digital journey towards 5G’

[İstanbul, Turkey, June 26, 2017] Turkcell and Huawei have signed a memorandum of understanding (MoU) on TechCity 2.0 cooperation to launch the ‘digital journey towards 5G’. Both companies will not only verify new technologies and launch them commercially, but will also explore potential services through the TechCity 2.0 project to develop technical, business, and social leaderships in Turkey. 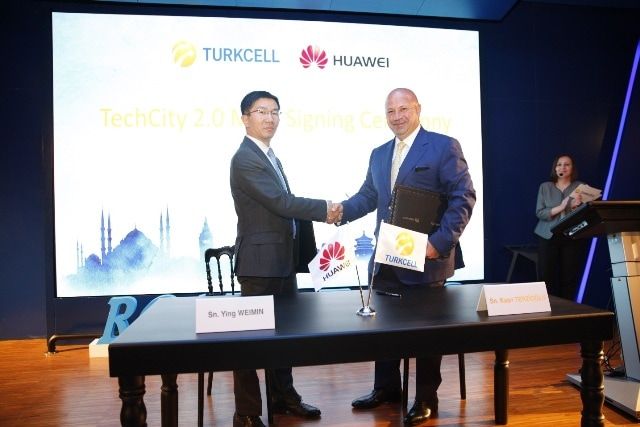 In 2016, Turkcell and Huawei officially launched the TechCity 1.0 Project to rapidly apply innovative technologies and new services on the live network, helping to develop Turkcell's technical leadership. Turkcell's network in Ankara city currently ranks first domestically and fourth internationally in the P3 benchmarking test conducted by P3 Communications thanks to its outstanding KPI and KQI as well as its excellent HD voice and video experience. In terms of new services, Huawei and Turkcell have jointly completed tests on household wireless broadband, smart parking, smart water metering, indoor navigation, and LiTRA services. The application of these new technologies not only improves users' communication experience, but makes their lives easier as well.

Based on the collaborative achievements fulfilled through TechCity 1.0, Huawei and Turkcell will further expand cooperation on TechCity, agreeing to collaborate on TechCity 2.0. In addition to continuous innovations in leading technologies and future-oriented network evolution, the TechCity project will also provide services to enhance business leadership and social responsibility.

For example, Huawei and Turkcell will implement technical verification of the future-oriented network in the TechCity pilot zone in Ankara, Turkey. By building an IoT industry chain in cooperation with local partners, Huawei and Turkcell aim to promote the prosperity of IoT. Moreover, the TechCity project plans to release a white paper on national household wireless broadband, claiming greater social responsibilities.

At the signature ceremony, Kaan Terzioglu, CEO of Turkcell, said,

"Turkcell has constantly increased the number of its network users and strengthened its market leadership through enhanced network capability and ultimate user experience. However, Turkcell never stops seeking to offer a better and easier life for our users. This is exactly what TechCity can achieve. Based on the TechCity project, Turkcell and Huawei will jointly introduce cutting-edge communications technologies and construct a satisfying MBB network.

"We are glad to collaborate with Turkcell on the TechCity project. We aim to further facilitate users' lives by offering leading technologies. In the cooperation on TechCity 2.0, Huawei and Turkcell will extensively discuss technical and business issues in the large-scale deployment of new technologies and new services, explore potential services, and claim greater social responsibilities."