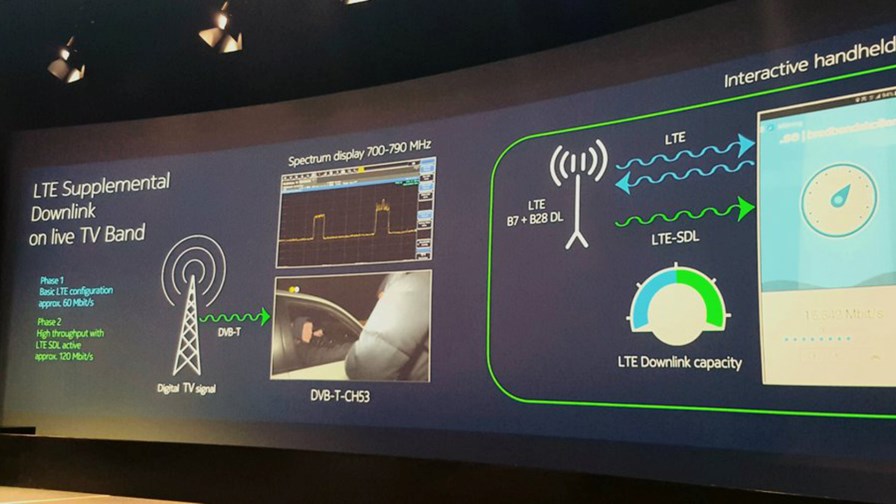 LTE Broadcast is not the only example of the long-overdue convergence between the mobile and broadcast industries. This afternoon, Nokia is conducting the world's first demonstration of LTE Supplemental Downlink (SDL) technology in a TV broadcast band. The live demo is taking place at Nokia’s Executive Experience Center in Espoo, Finland, with state public broadcast company Yle.

The hope is that using LTE SDL in a TV broadcast band provides new opportunities for broadcasters through innovative and interactive broadcast services, whilst not interfering with Digital Terrestrial Television (DTT) transmission. LTE SDL is currently supported on 4G LTE networks, and is expected to be supported in the early stages of 5G.

Today’s demonstration is relevant in the context of a proposal made by the European Commission to introduce a flexibility option in the 470-790 MHz (lower UHF) band, which is currently used by Digital Video Broadcasting (DVB) networks and by wireless microphones using the gaps between DVB channels. There has been a move in recent years by European countries to utilise the 700MHz band for mobile communications, which is supported by the EC in an overall EU strategy for the broadcast band (a draft decision by the European Parliament was published in February this year).

"I welcome this engagement by Qualcomm, Yle, and Nokia to demonstrate an innovative approach to using UHF spectrum," said Roberto Viola, Director General of DG CONNECT of the European Commission.  "This sends a clear signal to industry players and policy makers that there are many opportunities for broadcasters and their partners for using spectrum to foster a future-proof ecosystem in the UHF band."

"As a public service media company, Yle needs to keep up with transitions within the technology industry and media consumption, and show how to best serve our audiences," said Lauri Kivinen, CEO of Yle, the Finnish Broadcasting Company.

"With LTE carrier aggregation, operators can access this unpaired spectrum to increase downlink capacity,” said Stephan Litjens, VP of Nokia Innovation Steering. “This is vital in allowing operators to cope with the growing asymmetric downlink traffic which is driven by video, user generated content and new media services. In a collaborative effort broadcasters and operators will have the opportunity to explore new business models that will help drive use of smart devices and interactive services. It has real potential for broadcasters to create a globally converged platform for DTT and improve the economic model for the long lifecycle of their dedicated infrastructure.”

“LTE SDL technology will be an important step towards diversifying media content publishing and distribution," said Enrico Salvatori, SVP and President, Qualcomm Europe. "LTE SDL will not only enable broadcasters to reach out to tablets and smartphones, but will also enable many new services, including contextualized and individualised advertising, on-Demand TV, and mobile payments."

We will hopefully receive more news on this demo next week, but in the meantime keep checking the #LTE and #broadcast hashtags for reports from the demo.