Cellnex to add Play's towers to its portfolio in €800M deal 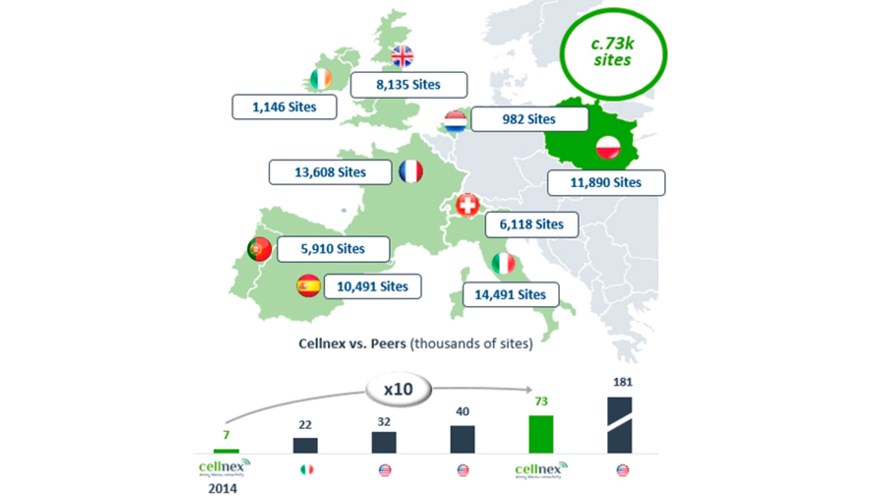 European mobile towers specialist Cellnex is splashing €800 million on a controlling 60% stake in the soon-to-be-formed company that will run the tower assets of Play, Poland’s largest mobile operator.

Once the deal is completed, Cellnex will have operations in nine countries comprising 73,000 sites (including existing sites, which total more than 40,000, and those planned to be built – see image above).

Cellnex, which has been growing fast during the past couple of years as a result of multiple acquisitions, has struck the M&A deal with Iliad, the French telecoms company that is in the process of buying Play. (See France’s Iliad buys Polish mobile operator Play.)

Iliad, which already has operations in France and Italy (and an MVNO in Ireland), announced its acquisition of Play in September and is expecting that deal to close in November: Cellnex then expects the towers unit deal to close by the second quarter of next year. The two companies already have a similar arrangement in France, where Cellnex owns a majority stake in the company that runs the cell sites built out by Iliad. (See Iliad's €2bn towers deal shows being cheap doesn't come cheap.)

Play currently has about 7,000 cell sites in Poland: Cellnex says the tower company in which it will hold the controlling stake could invest up to €1.3 billion during the next decade in building out up to 5,000 new sites. All of the sites, of course, would be available not only to Play but also to Poland’s other network operators, as Cellnex is a neutral host operator focused on maximizing revenues from multi-tenancy agreements: Cellnex and other neutral host companies expect demand for shared passive infrastructure to increase as mobile operators seek capital efficiencies as they roll out their 5G networks.

And the range of services on offer from Cellnex’s cell sites is growing beyond access to passive radio access network infrastructure: The company is developing edge computing services, as the company’s Innovation and Product Strategy Director José Antonio Aranda explained during TelecomTV’s Edgenomics Summit this week, and is adding IoT network infrastructure to sites in Italy, Ireland and the UK. The company is also branching into the private wireless networks market following a strategic acquisition announced in July.

For the full details of the deal in Poland, see this official announcement.