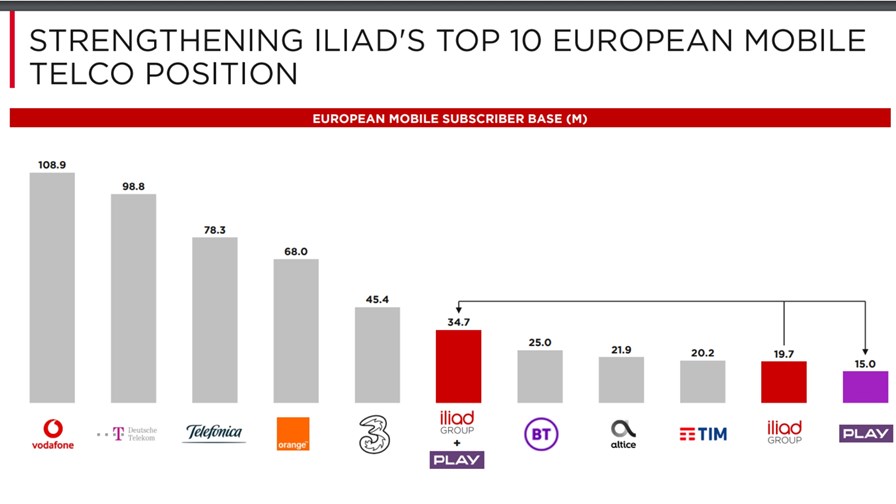 With a single bound Iliad appears to have joined the European mobile operator big beasts  by buying a substantial stake in Poland’s MNO, Play, and launching an offer to buy the rest.

Play is currently the leader in the Polish mobile market and Iliad  has signed a binding agreement to purchase a  controlling interest involving both cash and debt valuing Play at €2.2 billion for 100% of the share capital and an enterprise value of around €3.5 billion. The two companies together will have 41 million subscribers in France, Poland and Italy. If it goes through Iliad claims the deal will see it into the top 10 pan European mobile  players by subscriber numbers. As the chart above shows, Iliad with Play attached can now be rated as the sixth largest mobile operator in Europe

Iliad famously ‘upended’ the French market with ‘Free’, its ultra-cheap mobile and broadband play back in 2012. French politicians thundered that Free was destabilising the French mobile market and threatened to protect jobs. But Iliad, led by French tycoon, Xavier Niel,  held tight and built out its network.

Recently it made two  moves to expand the Iliad empire. It organised an MVNO in Ireland with incumbent eir and launched a version of Free in Italy - both in 2018, entering the country with mobile deals to undercut rivals, who promptly went on to share their towers and infrastructure with each other to lower their costs and to accelerate their network deployment (see - Vodafone, TIM get EU go-ahead for towers tie-up).

Perhaps the disrupted had learned that there were ways to disrupt back.

One way to bag a comfortable share of a national market in Europe might be, rather then emulate the other price challengers and try to build share from the bottom up,  to buy somewhere near the top where players already have large user numbers but relatively depressed share prices because there is no obvious way to grow as an independent entity without making a huge investment.  In fact Play is right at the top of the Polish mobile market and Iliad considered that it made a nice fit culturally.

“Like iliad, Play has seen exceptional growth over the past 15 years,” says the company statement. “It is the most recent entrant in the Polish mobile telephony market, having entered in 2007, and today it has 15 million subscribers and a 29% market share, making  it the leading mobile telephony operator in Poland,” it claims.

The next step, says Iliad, is to drive growth for Play in the mobile market and “facilitate its entry into the fixed market,” it says.

This morning, Reuters reported that Iliad’s shares were down by 3 per cent.