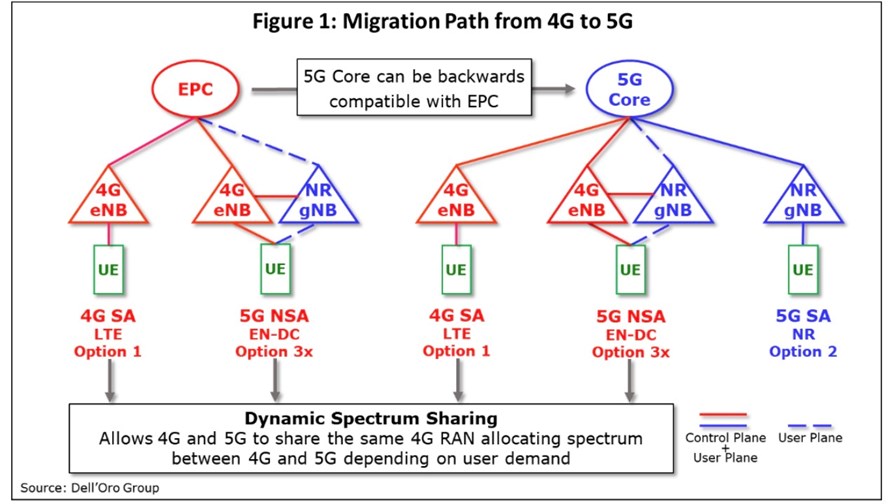 While the total global Mobile Core Network (MCN) market is expected to increase by a modest compound annual growth rate (CAGR) of three per cent between 2020 to 2025, during the same five-year period the 5G Core platform part of the market is set for a 33% CAGR, according to the latest forecast from research house the Dell’Oro Group.

In 5G networks, the core network architecture is dependent on whether 5G is standalone or non-standalone. Originally the most common mode of 5G deployment was non-standalone (NSA): It relied on NR (New Radio) access network technology and an existing evolved packet core (EPC) that provides converged voice and data on a 4G Long-Term Evolution (LTE) network and which keeps costs down by permitting mobile operators to sweat their existing infrastructure assets.

However, in standalone (SA) mode (sometimes referred to as “real 5G”), the 5G core network works alongside NR access systems to create what is regarded as a future-proof solution featuring the use of cloud-based technologies optimised for cloud-native applications, thus permitting the 5G core to support ultra-low latency services such as critical IoT as well as the allowing the quick introduction of new functionalities and applications such as network slicing. Non-standalone and standalone 5G will co-exist for quite some time.

The Dell’Oro report concludes that, from this year through to 2025, the cumulative investment in Mobile Core Network systems will be US$50 billion. By region, the share of investment is expected to be in the 18-23 per cent range in North America, the 30-35 per cent range in Europe, the Middle East and Africa (EMEA), the 40-45 per cent range in Asia-Pacific, and 5-10 per cent in the Caribbean and across Latin America.

The report adds that, by 2025, more than 70 per cent of the revenue mix between 4G and 5G MCN functions will be devoted to the burgeoning 5G market. Furthermore, the building of 5G Standalone Core networks in China is progressing at an astonishing rate and will outstrip all previous 2020 to 2025 forecasts not least because, in addition to the huge amount of work being done by China’s three incumbent service providers, a new (fourth) 5G service provider, China Broadcasting Network (CBN), has begun to deploy infrastructure and is building a national 700 MHz 5G network in partnership with China Mobile. Both companies say they will have shared nationwide 5G coverage by early 2024.

Elsewhere, and over the course of the second half of 2021, the deployment of 5G Standalone networks in Australia, Germany, Japan, South Korea, Switzerland and the UK will accelerate, while in the US both AT&T and Verizon will begin to spend heavily on their much-hyped 5G SA networks, but not until 2022 and 2023.

For more on related trends and developments, check out our recent Strategy Outlook programme dedicated to 5G Core developments.