Public cloud expansion drives double-digit growth of worldwide cloud IT infrastructure revenues in the fourth quarter of 2017, according to IDC

FRAMINGHAM, Mass., March 29, 2018 – According to the International Data Corporation (IDC) Worldwide Quarterly Cloud IT Infrastructure Tracker, vendor revenue from sales of infrastructure products (server, storage, and Ethernet switch) for cloud IT, including public and private cloud, grew 27.3% year over year in the fourth quarter of 2017 (4Q17), reaching $12.8 billion. For the full year 2017, the combined public and private cloud deployments continued the double-digit annual growth trend from past years with revenues reaching $43.4 billion for 21.7% year-over-year growth.

Except for Latin America and Japan revenue, which grew 6.2% and 4.8% respectively from a year ago, all other regions in the world grew their cloud IT Infrastructure revenue by double digits. Asia/Pacific (excluding Japan) and Central and Eastern Europe (CEE) saw the fastest growth rates at 59.0% and 34.1%, respectively. Canada (23.3%), Middle East & Africa (MEA) (27.5%) and USA (21.1%) had annual growth in the twenties, while Western Europe (16.6%) had annual growth in the teens.

**IDC declares a statistical tie in the worldwide cloud IT infrastructure market when there is a difference of one percent or less in the vendor revenue shares among two or more vendors.

***Due to the existing joint venture between HPE and the New H3C Group, IDC will be reporting external market share on a global level for HPE as "HPE/New H3C Group" starting from Q2 2016 and going forward. 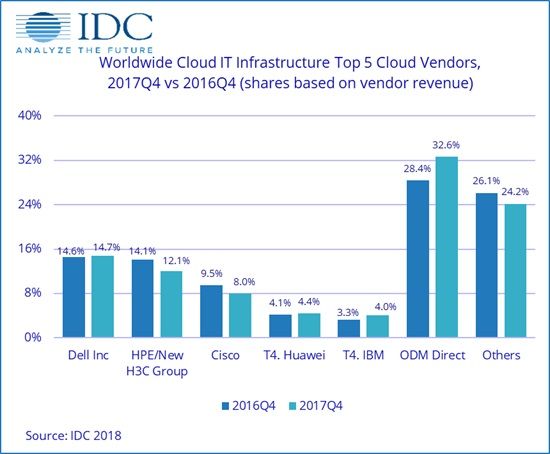